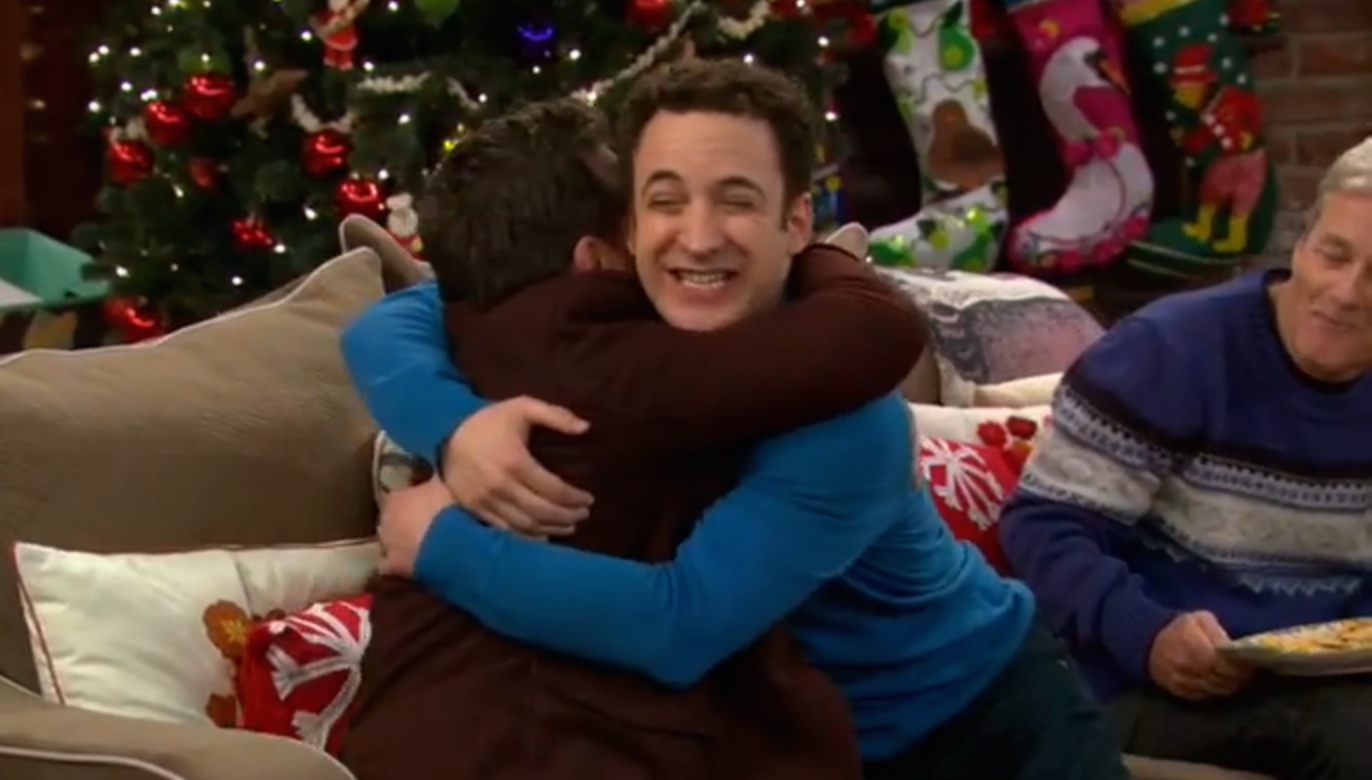 I’ve been watching Girl Meets World faithfully from the moment it began. I will watch Girl Meets World faithfully until the moment it leaves the air (hopefully with a planned goodbye in keeping with its father show*’s all-time-best finale as opposed to an abrupt cancellation). As the bright and blaring Disney Channel spinoff chugs along, it grows in charm (Sabrina Carpenter’s Maya has thoroughly won me over) and depth (Topanga seeing her hippie former self in the mirror was glorious) though it continues to bother me that Rowan Blanchard’s loveable but insanely beautiful Riley has almost zero everygirl appeal. Instead of treading the relatably unremarkable waters that made the early days of Cory’s world-meeting timeless, the writers have Blanchard playing Riley with more of a late-series Cory vibe, sweet but wacky. Disappointing as that direction is for the BMW purist in me, it makes a sort of sense in the stranger, bigger world of GMW where Corey Fogelmanis continues to be the best thing about the series as the pitch-perfect Farkle Minkus, the wacky offspring of the father series’ first truly wacky side character, here allowed to be a core member of the gang (the Farkle-centric “Girl Meets Smackle” was one of the show’s best so far). We’re also finally getting somewhere with the character development for Handsome McPerfectface (Peyton Meyer) as Lucas, remaining snarkily impervious to Maya’s teasing, demanding to be taken seriously as a debate team member, longing for home while being forced to prove over and over again that he really is loyal to his not-as-cool-as-him best friends. They’re facing an uphill trek made all the more challenging by nostalgia and decades of devotion but every moment this new foursome wins in capturing my attention away from their parents is another indication that this show will work.

But as much as I’m enjoying slowly investing in the new youngsters, I’m incredibly happy to see Michael Jacobs and his producers starting to do what I asked them to do in my pilot watch– lean on the original series and bring the mid-millenials to the show (which is mostly being watched by kids at the moment). Season one had a completely unexpected and thoroughly entertaining mini-arc for BWM bully Danny McNulty (“baboon!”) and, as season two heads into production, the writers have just announced expanded roles for Feeney and Shawn as well as the first appearance from big brother Eric (who, with his sister Morgan, was mysteriously not invited to Christmas this year). When it comes to Feeney, in particular, this can only be a good thing (the health of 80-something William Daniels permitting). GMW’s life lessons have always felt a bit odd coming from Cory (I feel like I’ve heard him say “undapants!” too often to find him all that wise) but no one delivers a dose of perspective quite like Fee-hee-hee-hee-nay.

This week we finally got a preview of how Shawn might be fitting into the series in seasons to come. And it was Wonderful (also wonderful, seeing Mr. and Mrs. Matthews again!). A curly-haired dweeb battling my own crippling fear of average-ness, Shawn’s cool kid/lost boy arcs never really resonated with me the way Cory’s did. He always made the most sense to me as a player in his best friend’ saga, igniting his unconscious jealousy, driving little rebellion plots, and putting the highschool microcosm into perspective by abandoning the cool party to eat pizza with the one kid he liked better than all the rest (Cory, of course!). Bringing “Uncle Shawn” into the GMW picture meant 1) explaining why he wasn’t there in the first place, and 2) finding him an emotional arc that would give him a purpose beyond eliciting that extra special old-friend feeling of an old character showing back up (I’ll admit to not realizing quite how much I missed Shawn until Rider Strong was wrapped tightly in Ben Savage’s arms and the world made sense again).

To find a place for Shawn in the picture, the GMW writers did a few key things. First, they eliminated the “cool uncle” role by giving it to Riley’s actual uncle Joshua. A very young kid when the original series left the air, Cory’s little brother very easily could have been retconned out of existence (as I suspect Morgan might have been, having lost her spunk when they switched actresses early in the long BMW run) but instead he’s reappeared in the delightful 17-year-old form of Uriah Shelton, carrying precocious Auggie around on his shoulders and catching Maya’s eye (“you will NOT be my aunt” was a perfect moment). The writers also smartly hung a lantern on what could have very quickly become an awkward dynamic- the fact that Maya was essentially designed to be the new Shawn. Wow, both quirky Matthews kids have a cool, good-looking BFF with absentee parents and next to no money? Coincidence! Or, a formula that worked well once, so…. the decision to just own the similarities freed everyone up from the awkward burden of ignoring them and planted the seeds for what has the potential to become a really interesting relationship on the show (or a really cheesy one, could go either way).

But the key Shawn decision was which element of the character from the father show the writers would use as a gateway to the character 14 years down the road. Though I loved Shawn for his quips and his hair flipping and some of his best moments in Cory’s stories, the one truly Shawn-centric story I remember most fondly was Cory and Topanga’s wedding. With years of sappy buildup and plenty of potential hijinks, that landmark episode could have been all about Eric’s wild last-minute wedding planning and that long-awaited vow exchange (“the only thing that ever made sense to me was you” GAH!) but, instead, the BMW writers did something weird and wonderful and made Cory and Topanga’s wedding episode about Shawn. It was about the single guy who’d grown up beside soulmates (Cory & Topanga), his own relationships permanently shadowed by their perfection. It was about soulmates (Cory & Shawn) coming to terms with the fact that non-romantic soulmates are destined to be torn apart (sorry, Dawson). It was about growing up and letting go and being left behind, about how we can’t keep our friendships the way they always were, about watching a love story from across the room with no one standing beside you. Basically, I’m obsessed with the fact that Cory & Topanga’s wedding episode was all about Shawn and I’m therefore equally obsessed with the fact that that’s the arc the GMW writers chose to play in bringing him back into the fold. To Shawn (however objectively unfair it may seem), Riley is the symbol of the life Cory chose over him, and the life he notably doesn’t have for himself. So far we’ve only scratched the surface- and the self seriousness Rider Strong began to layer onto Shawn near the end of BMW runs a bit of a risk of tipping the story into melodrama- but it’s the Shawn story I’m excited to see and, boy, was it nice to see him back beside Cory where he belongs.

Just as Girl Meets World was developing into an (albeit imperfect) show I enjoyed independent of its legacy (I particularly like the peppy theme song), it took a turn towards reclaiming the legacy of a show that meant more to me than almost any other. I can’t help but think that the combination might be the perfect one.

*father show is the only thing I can think to call Boy Meets World in relation to its spinoff. “Sister show” is standard for things running concurrently (like the Chicagos). “Mother show” is probably the most correct, like mothership or motherland, but Cory is the dad so we’re going with “father show”.