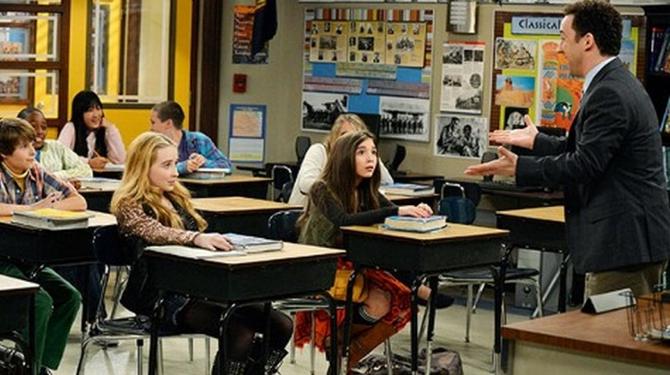 Do you remember when Mr. Feeney gave Cory an Incomplete on his “what I will be when I grow up” project because he didn’t think playing center field for the Phillies was a viable plan? Do you remember when Cory chased Topanga to Disney World to tell her how he felt about her? Do you remember when Shawn left the cool kid party because the only person he wanted to hang out with was Cory? Do you remember when Plays With Squirrels taught the gang the meaning of life? I do. Because Boy Meets World was formative for me, and pretty much my entire generation. It’s hard to imagine a show that was closer to the hearts of early millenials than Boy Meets World. It’s that enduring love that explains why a huge chunk of the audience for the Disney Channel’s newest pilot- a brightly hued girl-power cheesefest- was twenty something dudes (girls too, but the dudes are more notable here since the new show is coded very feminine).

Before you call me out on remembering my childhood with rose-coloured glasses, it’s important to note that Boy Meets World is one of the only pieces of media from back in the day that has passed the timelessness test (see also: The Mighty Ducks, Beauty & the Beast, Angels in the Outfield; moment of silence for Sister, Sister which failed miserably). Every time I catch an episode, it’s clear that Boy Meets World stands up 20 years down the road because I find myself enjoying it anew rather than basking in nostalgia. The early seasons in particular have kept their poignancy and humour (the later episodes are pretty silly) even as the titular world has kept turning, making the clothes look silly and the few glimpses of technology obsolete.

So we all tuned in to Girl Meets World, a generation raised on the ABC Primetime version of the show, unprepared for how very Disney Channel the new version would be. And boy is it Disney Channel. The colour palette is positively Oz-like and the themes are hammered home with way more force than last time around. “It’s your world now, Riley; make it your own!” yeesh. I don’t buy Cory as a teacher for a second (that kid was not good at school- why isn’t Topanga the teacher?) and, with no Feeney to guide the class with snark and wisdom, the show seems a little lost. The highlight so far is still anytime Danielle Fishel and Ben Savage are on screen as their iconic characters. I understand wanting to play down the Boy Meets World elements so that Girl Meets World can be its own show for its own generation but I’m not sure this generation is really going to be all that into Girl Meets World. Without Boy Meets World, Girl Meets World, at least so far, just isn’t very special. There are too many shows that look just like it. I say capitalize on the nostalgia (hey Disney Channel, here’s a new demo!) and use the well-developed characters already in the universe- add more Feeney, bring in Erik, make Mr. Turner the principal, have Shawn teach the girls about poetry, whatever, just don’t let the Girl be but a shadow of the Boy, because that just makes me sad.

Rowan Blanchard is charming enough as Riley but she’s generically cute compared with the winning specificity of Ben Savage’s 12-year-old everyman (now a sweet and goofy father figure) and Sabrina Carpenter’s bad girl best friend is wildly more extreme than Shawn despite hints at a similar backstory. Peyton Meyer is a cute love interest so far- here’s hoping they give him a personality sometime soon- but the real winner is heir to the Minkus throne Farkle (I actually wrote that sentence before noticing that IMBD has his last name written as Minkus- apparently we’ve got a second generation thing going on; does that mean Lee Norris will make an appearance? The more original series guest stars the better!). Corey Fogelmanis is the breakout kid star of this show by far with awesome timing and a really great sense of who his character is. Farkle is the only new character who really feels like he belongs in the Boy Meets World universe of heightened but truthful oddballs just making their way, inelegantly.

Boy Meets World was messy and simple and therein laid its power. We were all Cory, we all loved a Topanga, we all cherished whomever was our Shawn. Girl Meets World is glossy and cute with picture-perfect kids incapable of the sort of believable insecurity that led to Cory attempting to chemically straighten his hair. If I were the Disney Channel, I would shift my target demo and aim for the early millenials with a focus on Cory and Topanga’s parenting struggles more than their perfect daughter’s golden girl woes. Plus a spinoff for Farkle, because Farkle rocks. It’s possible that the show’s just not in its groove yet- that the cheese will ease off and strong characters will emerge from these generigirls- but so far I just want Feeney to come in a set it all straight.