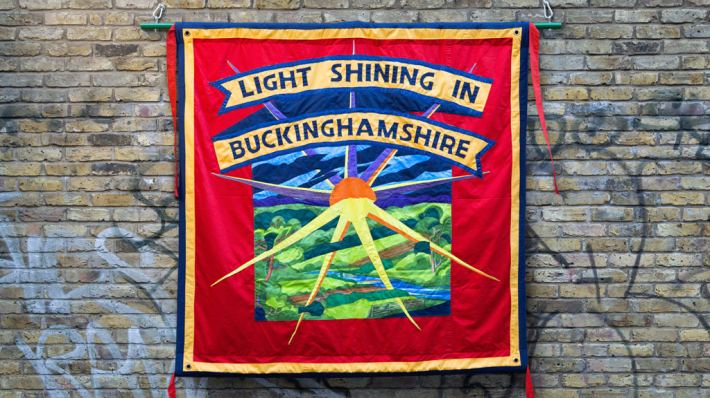 The National’s Light Shining in Buckinghamshire

It was not surprising that the National would put on a play post-election about the origins of Parliament. Fortunately, it is not the dry, dour production that one might expect it to be. Carol Churchill’s 1976 work takes on the struggle of the factions of Parliamentarians, Levellers and Diggers during the English Civil War in the mid-16th century, yet the history is ultimately immaterial to enjoying the work. The technical proficiency alone lifts it to the National’s pedigree and it helps that the play has aged well enough during its near 40 years of life to remain relevant.

The staging develops the atmosphere of play superbly thanks to the unparalleled efforts of director Lyndsey Turner. The action mostly takes place on an absurdly large dining table where the King’s court are seated. While showing excess it also demonstrates the writer’s Brechtian influences since the table, being so constructed, offers a forced perspective with the unreality of the situation being made constantly apparent. It is a credit to the production team that they managed to create a table large enough to fill the majority of the enormous theatre. It is a perennial fear with the Lyttelton Theatre that the space is underutilized; the table-stage is somewhat so, but this turns out to be a strength: the idea of wasted land in the play is shown in the ‘wasted’ space of the table. In addition to this, the connection of man to nature is explicitly given treatment when the cast in the second Act remove the wooden boards of the table to reveal a bed of soil underneath. The radicals then occupy this soil for the rest of the play. While the pro-parliamentary factions discuss their goals and desires, the King and his court surround the table, eating and then working silently, giving emphasis to the all-encompassing power of the monarchy at that time.

The performances are extremely competent, with the best coming from the authoritative Sargon Yelda as both a preacher and as Thomas Rainsborough. Despite the reservations of such an intellectually fertile subject matter being insipid, the best performances of the play perversely come out during the Parliamentary debate which closes the first Act. With such a debate, it is not the content that creates the drama but the people who channel the force of their ideas; we see the energy and fear involved in questions of grand concepts such as liberty and property. The irony is that the most invigorating moments come from this more formal setting of Parliament rather than in the far more personal and emotional (but not necessarily moving) scenes in the countryside. The actors do admirable jobs in portraying the radicals in the quieter scenes, especially in the majority of the second Act; however, while they are sympathetic in the face of their increasingly crazed radicalism, none of the cast ever completely act the feelings that their words invoke.

It is pertinent to say that the problems I found with the production, minor though they are, can be put down to the weakness of the script. It was evidently tricky to balance the author’s socialist rhetoric and grand political questions with the more tender contemplations had by the peasants.

While their bipolarity of the script may disrupt the audience’s attention, the calibre of production and performances is enough to make Light Shining in Buckinghamshire an extremely strong way to begin the National’s summer..