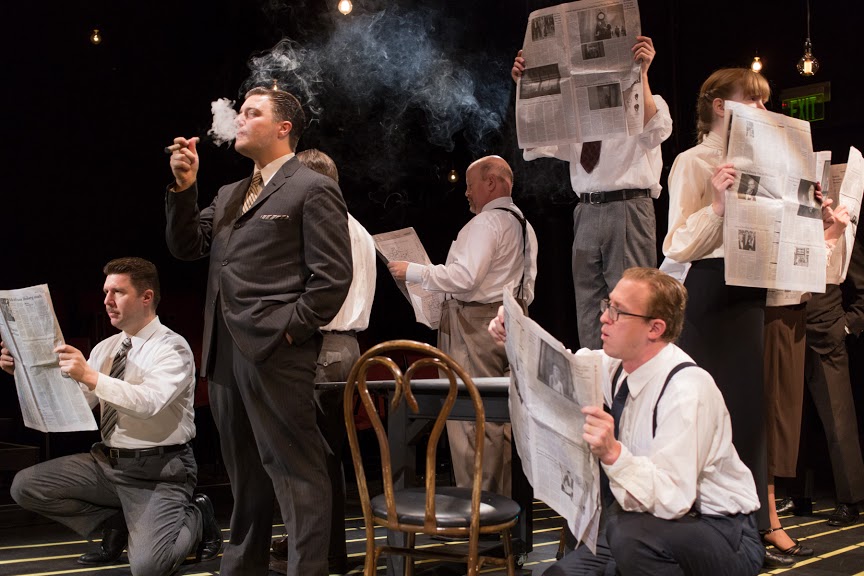 Life isn’t a movie script. Or a TV show, for that matter. But anyone who has spent time in the mind of screenwriter Aaron Sorkin knows stories can be well served through these media. We can have our cake and eat it too: a hurricane of human brilliance and drama can whirl around us, always threatening to implode into reductive nonsense, but only occasionally doing so.

Sorkin’s wit and razzmatazz are well-suited to dramatizing the birth of television itself. The Farnsworth Invention is a stage play that recounts the development of digital television by the unassuming, tech-whiz, country-boy Philo Farnsworth. Farnsworth’s joyous romps into technology and science are starkly juxtaposed against the business savvy and impressive tech achievements of David Sarnoff, his rival. Bootstrap-tugging media-mogul Sarnoff has shed his childhood poverty and immigrant Russian accent to rise to meteoric heights in the American telecommunications industry. A pioneer promoter of radio, convinced by “experts” of the impossibility of transmitting images over long distances (“television”), he finds his business and his morals challenged by the upstart from rural Idaho.

Flat Earth Theatre takes on this challenging play at the Arsenal Center for the Arts, continuing its 2015 season “Progress and Peril,” focused on staging “stories of scientific progress and the lives it has ruined.” Though many initial critics of Sorkin’s play claimed it would prove better on the big screen than in the theatre, this production combines the best of both worlds. Directed by Sarah Gazdowicz, the show is zippy, fluid, and strong, preserving the immediacy and power of live theatre while managing to convey film-like dynamism and rapid-clip scene shifts.

The production does a fine job at emphasizing the slipperiness of historical memory. The audience is flung headfirst into the multifaceted story, with a cocksure Sarnoff (Michael Fisher) and a quietly confident Farnsworth (Chris Larson) serving as the primary narrators and distorters. Upholding these titanic performances is a fine ensemble (Matt Arnold, Katharine Daly, Robin Gabrielli, Andy Hicks, Justus Perry, Korinne T. Ritchey, Noah Simes, Sophie Sinclair, and Dale J. Young), an excellent team of actors adept at slipping into various witnesses of this exciting time.

The show’s tech is brilliant (directed by Leigh Downes). A traverse stage in the Arsenal’s Black Box allows the audience to bop its attention back and forth, as if watching a two-hour tennis match (set design by Rebecca Lehrhoff). The show eschews many clunky and time-consuming props for chalk-on-slate drawings and mimed motions (Lindsay Alaimo as property master), and relies on shifts in lighting, on sound cues, and on an excellent wheeled folding table to keep the pace as snappy as audience comprehension will allow (lighting design by Ian King; sound design by Kyle Serino).

Despite careful direction bent on keeping the dialogue crackling and intelligent, the rapid-fire delivery risked incomprehension at certain key, complicated moments (e.g. during arguments between corporate agents, when Sarnoff or Farnsworth is describing the scientific details of various apparatuses, etc.). Still, the action is vivid enough to make you feel like you are actually witnessing events live, be it the stock market crash of October 29, 1929, courtroom scenes, or speakeasy confrontations.

Occasionally, the vocal/physical performances prove a bit too cheeky. We get that these are smarmy men from the 1920s, but we don’t need every moment so heavily infused with affectations in the spirit of Edward G. Robinson-style banter, see? That being said, this flavor and technical virtuosity gives the show its vitality and saves it from sinking (too-much) into a Sorkin sandpit of American exceptionalism and Boomer-nostalgia.

A typical Sorkin flaw present in the play is the limited development of the few female characters. Pem Farnsworth (played by Katharine Daly) is the only female character that is not as hazy and immaterial as Farnsworth’s initial television pictures (Daly’s emotional interactions with Larson’s eager, slightly booze-addled Farnsworth provide some of the best moments in this production). Alas, this world was very much a man’s world, so it doesn’t do to bash Sorkin too much here.

Speaking of which: poor Sorkin has gotten a lot of hits in the media recently for his characteristic screenwriting tics. But there is an interesting knowingness in the writing of The Farnsworth Invention that intrigued me. Life isn’t a move script, and I think Sorkin is more aware of this than his detractors will give him credit for.

The play’s plot is not historically accurate, as the program notes allude to. Spoiler alert: in this alternate universe, Farnsworth is ultimately crushed by the big-bad-businessman Sarnoff. An emotional conversation takes place post-verdict, before we are quickly reassured that the meeting between the too men actually never took place. By winking at our desire to see this ending as factual, is Sorkin making a shrewd point about our desire for underdogs, our desire to turn history into a good-guys vs. bad-guys narrative? Or is he simply relishing in a perceived purity for Farnsworth, and wants us to join in the game? That fact that the play’s own verdict on who invented TV is ambiguous makes the work far more interesting to think about after walking out of the theatre. It isn’t banter that evaporates as soon as the charming actors quit fast-talking. It makes us ponder, it unsettles us, it pushes us.

This is a fun production of a show well-worth seeing. Full of interesting historical analysis, this play treats the audience to a colorful behind-the-scenes peek at the story of radio and television, and the battle to control the media in its nascent stage. Sorkin’s text may prove grating if you’ve had it with his predilection for American-hero-worshipping, his exulting obsession with who controls media, and his inability to write interesting female characters. But even if you are not a Sorkin fan, you should still check out how the folks at Flat Earth put on a creative, well-oiled machine of a show.

Flat Earth Theatre’s production of The Farnsworth Invention is playing now through June 27th, 2015, at the Arsenal Center for the Arts Black Box Theatre.