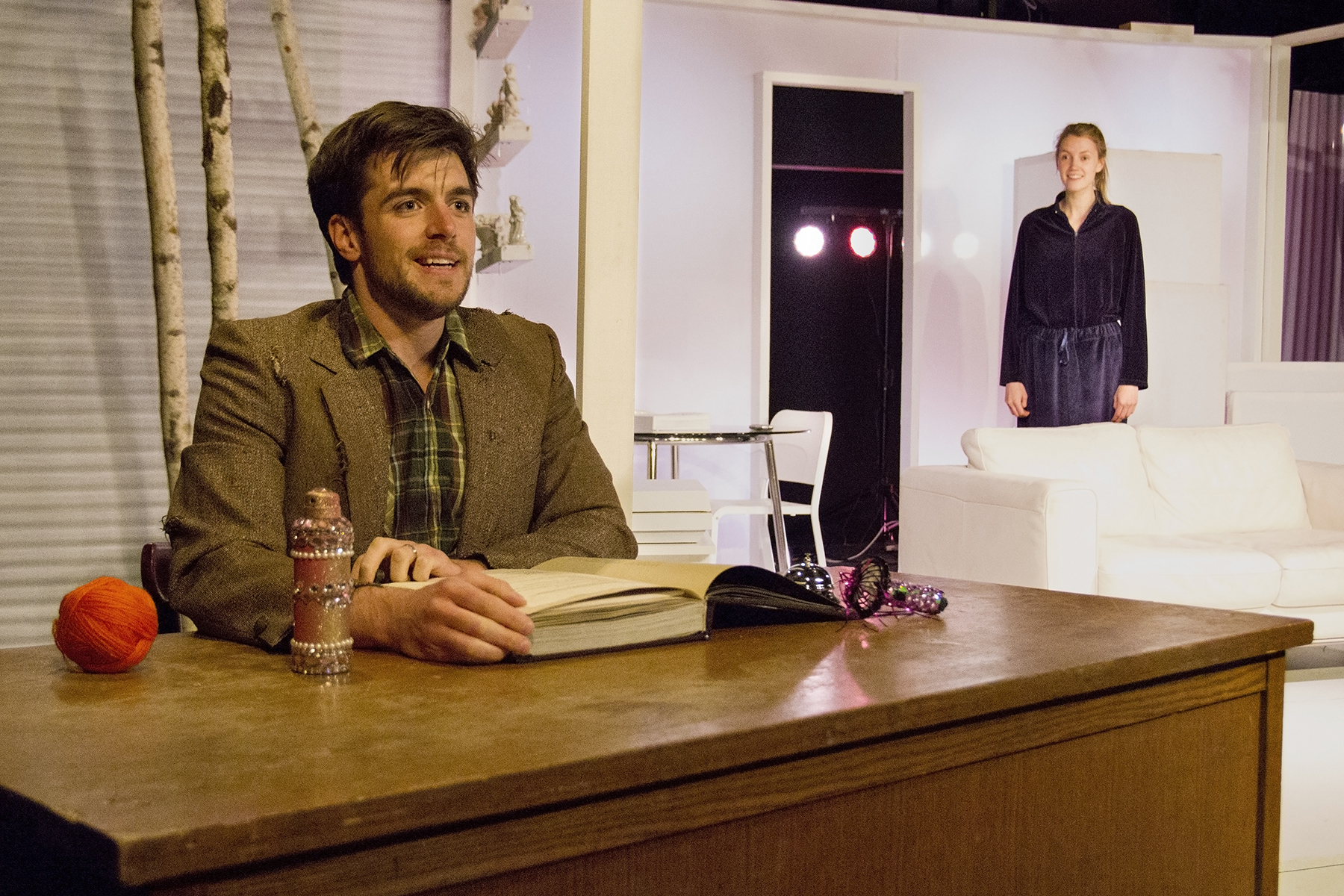 Once Upon a Trout

Claudia Dey’s well lauded but suspiciously neat backwoods fairytale is an intriguing but flawed examination of co-dependence on its own but director Daniel Pagett does something directors rarely do with fairly new texts in the current production by new indie company Severely Jazzed Productions- he messes with it and, in doing so, he makes it better. The story as Dey tells it hits some familiar notes- lonely and broken twins (fraternal- one sweet and sad, one brash and vain) marred by tragedy and isolated from the world have their lives turned upside down by the sudden appearance of a mysterious and “handsome-ish” stranger (Trout Stanley, a man with a fish name and a foot fetish; those details are less typical).

Not to give anything away but everything turns out alright, there’s love found and curses broken, truths told and important self realizations that move everyone into their castle on a cloud (or by a dump in British Columbia). Having been introduced to a dark world filled with strange creatures, fantastic imagery and a few hold-the-phones monologues that hint at a more complicated play, such an ending feels simplistic, so satisfying as to not be ultimately all that satisfying. Luckily, Pagett’s foremost of many bold moves is to lean into what might otherwise be the play’s flaws and, by embracing them, end them. He invents a fourth character- The Storyteller, who “reads” us the story of Trout Stanley from an oversized book not unlike how Julie Andrews narrates Enchanted, taking it full fairytale to turn the unrealistic into the allegorical. This unwritten character is played by charismatic Uncalled For founding member Dan Jeannotte who voices stage directions, echoes key dialogue and provides sound effects (hair dryers, cans opening) as the actors play out the story against a blank canvas set with prop props (a box labeled “food” stands in for a breakfast described in detail by Jeannotte’s narration).

The Storyteller frame excuses the tied-with-a-bow nature of Dey’s structure but it does present a challenge for the three main actors who now have to find a very tricky balance between playing up the wacky allegorical caricature elements of their whimsical characters and delivering Dey’s standout emotional monologues with the human truth they deserve. That imbalance sometimes boxes the performers in and makes their work seem less organic than one would expect from a cast of seasoned improvisers (all three members of the Bad Dog Repertory Players). The vibrant Tess Degenstein faces a particular challenge with Grace, the brazen sister and the “biggest” character of the three who hides behind persona so adamantly for so long that it’s not until really late in the play that you get the opportunity to really connect with her. It’s her sister Sugar who’s the easy connection, a sympathetic underdog played with so much touching sincerity by Hannah Spear that your heart immediately attaches to hers (as does Trout’s, evidenced by fantastic chemistry between the actors), even when her phobias and affectations live in that heightened space. The story really belongs to the two women, despite the play being named after the man who comes between them. For his part, Trout is an excellent showcase of romantic intrigue- a skill that Colin Munch often pulls out in improv but rarely plays onstage- but never quite makes sense as a character in his own right. That’s perhaps a side effect of being seen mostly through the naive and/or suspicious eyes of Sugar and Grace, magnified through the lens of Jeannotte’s added gaze as he watches the action as though for the first time with a movingly empathetic eye (at times I was more invested in his experience of Trout Stanley than in mine, which I suppose should be a criticism but he’s so engaging it feels like the opposite).

Melissa Joakim’s lighting design and Daniel Maslany’s sound could use a more delicate hand and I’m unconvinced that the show-opening dance number does the story any real favours but, in general, Severely Jazzed appears to have elevated their text, a feat remarkably rare in the first place let alone with a hometown script that’s barely a decade old.