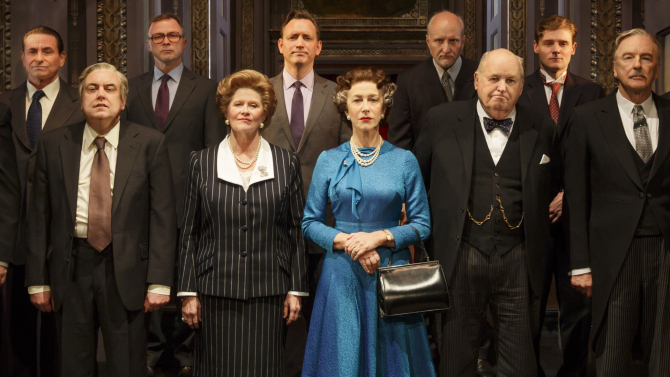 Helen Mirren in The Audience

The Queen will see you now. Another West End transplant has made its way to the U.S. in the form of playwright Peter Morgan’s The Audience, and it has brought a much-celebrated leading lady, Helen Mirren, to Broadway. While Dame Mirren’s performance as the Queen is captivating and anyone with even a slight bit of interest in British history will find the storyline engaging, the play itself takes great liberties with its portrayal of certain historical figures and glosses over significant historical events in an oddly lackadaisical manner. Ultimately, The Audience provides only hypothetical glimpses into the Queen’s life, outside of the heavily fashioned pomp and circumstance that the public sees on a daily basis.

The Audience is a fictional account of Queen Elizabeth’s weekly meetings with her twelve Prime Ministers, from Churchill to Cameron. While the audiences do occur, they are private, so the accounts are fictional interpretations of what might have discussed between the Queen and the Prime Ministers at key historical moments during Queen Elizabeth’s reign. The Audience portrays Queen Elizabeth as a confidant and quasi-therapist for the English heads of government – a woman who seeks to be informed about the political landscape of her country while not overstepping the ceremonial boundaries of her role as Head of State. The discussions held vary from serious matters of war with both Anthony Eden (the Suez Crisis) and Tony Blair (the Iraq invasion) to tabloid fodder with John Major (the status of Princess Diana and Prince Charles’ marriage) and Margaret Thatcher (the Queen’s approval of Thatcher’s policies). Between these meetings, there are but glimpses of Elizabeth’s life as a child and fleeting moments that allow the audience to see the woman behind the title of “Queen.” Given that the Queen’s entire existence is highly orchestrated and that public relations experts carefully craft the image of the royal family, these moments are poignant.

Reflecting both sentiments expressed by both British historian Robert Lacey and a documentary filmmaker Michael Cockerell, the play surmises that Harold Wilson was the Queen’s favorite Prime Minister despite his humble beginnings and awkward introduction to her. Perhaps more surprising is the treatment of Prime Minister Tony Blair, who appears in only one scene despite his recent, headline-worthy tenure. It is suggested that the Queen strongly disliked Blair and, in a hypothetical encounter, the Queen pleads with him not to join the U.S. in war. Another historical figure that receives a royal wallop in the play is tough-as-nails Margaret Thatcher. Thatcher is portrayed as a bully of a woman to Queen Elizabeth’s restrained formality. While many publicly denounce Thatcher’s politics to this day, the portrayal of her is particularly scathing and at odds with other, more balanced modern portrayals of Thatcher (including Meryl Streep’s beautiful performance in The Iron Lady).

Bob Crowley’s set is quite simple – not quite capturing the enormity or spectacle that is Buckingham Palace or the Queen’s Scottish escape Balmoral Castle. A few pieces of antique furniture ordain the meeting room, alongside a small writing desk in the corner and an inconspicuous side table useful for serving tea. The set is meant to reflect the large hallway leading to the meeting room, with a throne at the very end; however, the colors and scaling fail to convey the enormity of the palace and, ultimately, it does little to compliment the staging. With the exception of a photo shoot sequence, the majority of the play takes place in a glorified sitting room. The most exciting set or prop piece runs across the stage briefly in the form of several corgis, accompanied by requisite squeals of delight from the audience. Admittedly, this is one of the few shows that includes real dogs when they are warranted (the Queen’s corgis are well-known) – not merely as a gimmick to win audience support as so many shows have done in the past few years.

As this play is a fictional biopic, the actors have the particularly difficult job of portraying easily recognizable and well-known people. Rufus Wright does a respectable job of embodying the recent Prime Ministers Blair and Cameron, although he has very little stage time in totality because of the non-focus on either character. Dakin Matthews similarly succeeds at portraying the larger than life man that was Winston Churchill – from his mannerisms to his strong speech patterns. Less successful was Judith Ivey’s turn as Margaret Thatcher who could have easily been playing a Texas politician rather than Thatcher with both her accent and mannerisms. Her appearance is not helped along by the potentially disingenuous portrayal of the Queen’s relationship with Thatcher, which is not, by many accounts, nearly as icy as their onstage dual of words suggests.

Then, of course, there is the Queen herself – Dame Helen Mirren. Many elements of Mirren’s performance are restrained and understated, yet she believably portrays the monarch with a grace and poise that audiences have come to expect of Mirren. Admittedly, I know very little about Great Britain’s royal family and know even less about the Queen because of the limited role that government figureheads play in meaningful public policy and debate; however, I imagine that Mirren’s performance is an admirable one. She transforms from an uncertain young leader to a confident, intelligent woman with ease and manages to inject some personality into her character without creating a caricature. Mirren has command of the stage and has little trouble holding the intention of the entire room, a trait worthy of a queen.

While much of the cast assembled in The Audience makes a venture to this production worthwhile, it is unfortunate that the playwright was not able to develop a more fulsome picture of the Queen’s relationships with her Prime Ministers. Moreover, Morgan’s portrayal of certain characters may reflect his personal feelings towards certain politicians or his political tendencies – not the known facts about such characters. For those interested in British history and politics, The Audience may be a welcome dramatization of the Queen’s role in both; however others may find themselves bored with the numerous sitting room conversations – that is, unless they just want to see Dame Helen Mirren onstage. In which case, by all means, go see The Audience.