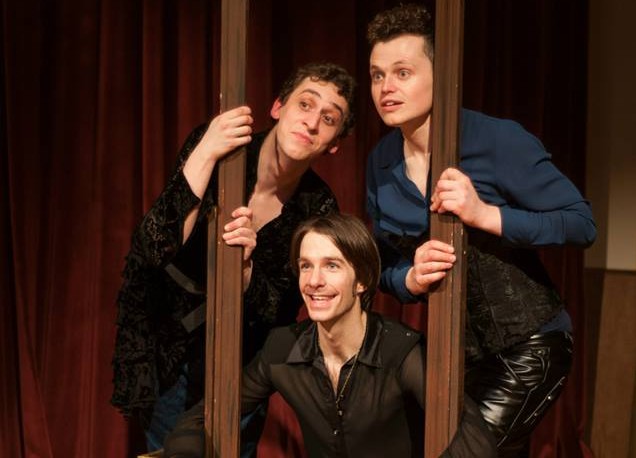 Bad Habit Productions put on a versatile and dynamic Orlando, Sara Ruhl’s adaptation of the Virginia Woolf novel, in the BCA’s Deane Hall. Directed by Daniel Morris, the show’s performances were enhanced by a mobile set constructed in the round, by sumptuous costumes, and by warm and cool washes of color (orange, blue, and yellow) that helped lull the audience into a hazy sense of possibility and fluidity: historical fluidity, gender fluidity, and the fluidity of language.

Orlando (Theresa Nguyen), a page boy in Queen Elizabeth’s court, finds himself to be the object of various women’s affection. But it isn’t until his own heart is crushed by a mysterious Russian princess (Laura Menzie) that the young poet’s spirit, dormant from years of courtly glitz, is awakened to the wider world. After a particularly wild night in Turkey, Orlando returns to England as a girl, two hundred years ahead of where the story began. The centuries whiz by as Orlando adjusts to new mores, to unfamiliar restrictions on his new sex, and to a technological revolution that has swallowed up his early modern world forever. Orlando goes through this journey aided by a chorus of three (William Bowry, Tom Rash, and Noah Simes), protean figures who seamlessly transform in voice and spirit before our very eyes, and who are the driving force of the production.

The stage was often “fractured” and wheeled around, making it very easy for the actors to perform out to each section of the audience and to enhance the sense of time and space whirling out of control (scenic design by Emily McCourt). This staging also let us appreciate all the delicious gender-fuckery, one of the production’s strong suits. Having Orlando be played by a woman emphasized how androgynous he is to begin with. Nguyen, a lithe and distinctly female figure, still managed to convincingly portray Orlando’s confusion and initial awkwardness with his shift from male to female. The effective androgyny of the title character carried over into the ensemble’s costumes, all form-fitting leather pants and corsets, skirts and high-heeled buckled shoes (costume design by Liz Fenstermaker). Along with the costumes, a big applause should go to Helena Mestenhauser for fantastic prop design; I’ve never seen so many good uses of a period-piece umbrella.

Unfortunately, the second half of the production inexplicably lost much of the pre-intermission energy. Perhaps the greater emphasis on the contemplative aspects of the text over the initial active plot lines led to some stagnation. To be fair, the second half lost the fiery passion brought on by Sasha (Menzie), the Russian ice-princess who ensnares Orlando’s heart. After the excitement of watching her elegant form skating all over the space, all defiance and impishness and gorgeous deceit, I found myself longing for her to brought back into the story. But the text hurtles us forward, away from frozen London towards Woolf’s present day. The wan, disorientation of modernity was palpable; it began to seep into the audience, significantly dampening the last fourth of the show.

Still, as I noticed how the music and lights shifted with each scene, gently yet persistently flowing forward in tandem with the capricious movements of “time,” I had to admit this production captured the liquid essence of Woolf and Ruhl’s works (sound design by Chris Larson; lighting design by PJ Strachman). Bad Habit took on a challenging play and delivered a satisfying rendition.