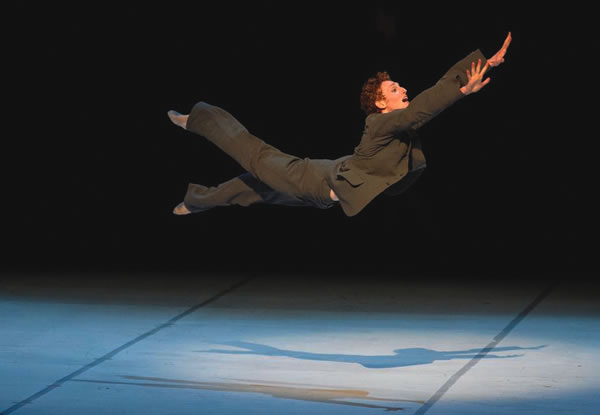 Our reigning Best Ballet Performance winner (for his 2013 turn in Robert Binet’s Unearth), National Ballet second soloist Skylar Campbell is nominated again this year for what is likely to become known as his signature role- that of tragic wunderkind dancer and choreographer Vaslav Nijinsky in John Neumeier’s contemporary psychodrama Nijinsky (for which he was plucked from the corps by the choreographer himself to become one of only two men in the company to dance the titular role). Be sure to catch Skylar’s last interview before jumping into this one.

What have you been up to since your interview for the 2013 awards?
We did a lot of touring. I was injured at the beginning of the season. That was kind of a first for me. I mean I’ve never been really injured before and it was kind of a bummer because we were doing Alice in New York, at Lincoln Center, so it was kind of an exciting thing to be able to dance on that stage, which I wasn’t able to do. So that was kind of a little bit of a letdown. But then we got to bring back Nijinsky which was nice and I got to perform Nutcracker again which is always a pleasure. It’s like a lovely Nutcracker to dance. So I think we all actually look forward to it, even though it comes around every year. The big injury was in the beginning of the season, but then I was able overcome it, and then being able to perform Nijinksy was very exciting as well. I think that it was a little bit better received the second time, I would hope. I don’t know how it sold, but in terms of dancing, I felt like I could really just let it flow rather than really have to be too stressed out about it. Because the first time it came was quite a stressful experience for, I think, the whole company, but now that we were able to of bring it back and tackle it again, it all really fit in our bodies a lot better than it did.

You won Best Ballet Performance last year for your work in a short program. But this year your nomination is for a full-length title role wherein you rarely leave the stage. How do you develop that kind of stamina?
Well, it takes an extreme level of concentration to carry the ballet. When I first learned it, I took notes in a journal to remind myself of everything that John Neumeier, the choreographer, wanted, but I think that this time round, I didn’t really have to think about those things, I kind of just let it take me on the journey itself. The steps really speak for themselves. And you learn where to push and where you can kind of relax and still be present at the same time. That’s the whole thing about doing a full length ballet, you need to learn where to conserve your energy and I feel like, the first time we did it, I wasn’t as familiar with that process as principal dancers are. [As a second soloist] you don’t get very many opportunities but, when you do, you learn how to really pace yourself and I feel like, this time round, pacing myself was something that I knew how to do. So you learn where to not necessarily take breaks but not give as much energy in certain steps or movements as you would in moves that you’d have to.

Did you do much research into the man himself while preparing to play him?
I read his diary, which his wife later edited down to a more condensed, simplified version.. That was very interesting. But it was when he wasn’t dancing, it was sort of the last couple years of his life. He was a very interesting man, not just in his art but in life and his perspective on life. He spent more than half of his life in an asylum, so his dancing career actually wasn’t very long but, for what it was, it was quite magnificent because he created roles that people really never had seen before in the world of modern dance. He revolutionized the way modern dance is today. And the way John choreographed the ballet- there’s no footage really of Nijinksy that exists that we know of, so all John really went off of was pictures and his idea or thought of what Nijinsky might have been like. Through pictures, that’s the only way we can interpret the movement. I mean, there are choreologists, people that write down ballet steps [but] I think, as a dancer, he wasn’t necessarily concerned with the steps, but just concerned with humanity and life. He was a very deep, kind of crazy, crazy man. It was very interesting. We did a lot of research, we all did, because we’re all very interested, and I think it’s the first time there’s really been a biography ballet on him done well. People perform his works. Different companies around the world perform his choreography or works that he danced. But there’s really not a ballet that sums it up all into two acts. So I think John did a really amazing job of creating the story, bringing it to life.

Throughout the ballet, the character of Nijinsky is split into two sides of him. You play the real man, and then there are multiple other dancers playing him in his most famous roles.
So it’s like an imagination, it’s kind of like a throwback of all of his life, and then all of these different aspects of his life surrounding him. So they’re all memories or thoughts.

Did you collaborate at all with the dancers doing the other forms of Nijinsky? And how did you distinguish who he was as a man off stage from his legend?
Well, from reading who he was, from reading his diary, you can really tell what kind of man he was and what kind of relationship he had with his wife and the relationship he had with Diaghilev who really made him into what he was. So this aspect I think is fairly well documented with many people writing about how he treated his wife, how his interaction was with Diaghilev, so I think this is fairly easy to interpret. Nothing’s easy, obviously, but it was clear how to interpret these aspects of his personal life and then his dancing life I think is the same for that matter. We have pictures and we had documentation of people saying what they saw, so I think this part was pretty clearly documented, it’s just the delivery and the way you want to say something I think is the most important part. Not to over-dramatize something or not give enough, I think is finding the balance between those two things.

Nijinsky’s a really heavy piece with big emotional and physical demands. What do you do in your off hours to keep your spirits and energy up?
I do what I normally do. I didn’t really do anything different. I think I definitely thought about the role every night when I went home. I didn’t do anything really physically different to prepare myself other than just the rehearsals we had here so I think just mentally preparing was the hardest.

What you would say is the biggest challenge of Nijinsky?
Dancing, doing the role justice. It’s very easy to mess up, so I think the hardest thing is to really stay on, all throughout the entire two acts. You really don’t have a time to turn off, basically. So that’s the hardest part.

What’s it like working with John Neumeier?
Very interesting. He’s a super intense person in the studio, and outside of the studio for that matter. I don’t know him personally, but I hear he’s a fairly relaxed guy. But in the studio, he really takes his work seriously and I think when he is here, the whole company is always at attention, to him and whatever we’re doing revolves that around his work, because he really cares about his work and he wants us to really dance it the way he wants it, not just for him, but for ourselves to make ourselves feel like we did something good for the audience.

What are you working on and what’s coming up for you?
I am getting the chance to perform the White Rabbit in Alice’s Adventures in Wonderland [on stage now], which is a first for me.

Also, next season was just announced so that’s something we’re all [excited about]. It should be a very exciting season with two huge new premieres for the company. So I’m most looking forward to that, I think.