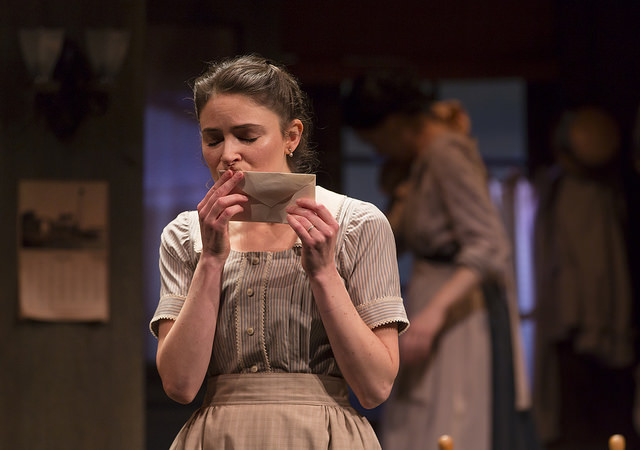 The Second Girl Feels Too Secondhand

Although Downton Abbey has been recently winning back my attention after a humdrum 4th season, I decided to watch a different period piece being performed live at the BCA during this gloomy winter season in Boston. The Huntington production of The Second Girl, written by Ronan Noone and directed by Campbell Scott, presents a look into the “downstairs” goings-on of the Tyrone household, the family portrayed in the classic O’Neill play Long Day’s Journey Into Night. The house cook and first girl Bridget O’Sullivan (Kathleen McElfresh), fights back the demons shaped by past regrets and a decade-long exile from her native Ireland with drink, prayers, and forceful repression. Her niece Cathleen O’Leary (MacKenzie Meehan), the new second girl brought from overseas (with Bridget’s help) on the ill-fated Titanic, clashes with her aunt in her youthful desire for more than a secure life of grueling service, even in America. The two women are often refereed by the household chauffeur Jack Smythe (Christopher Donahue), a man who has experienced his own share of tragedy and regret yet longs for a new beginning, preferably accompanied by Bridget this time.

While the production was well-acted, beautifully staged, and thematically complex and interesting, it never hit extraordinary or revelatory. Despite its ambitious goals to portray the loneliness and poignant longings inherent to any immigrant experience, the historical framing proved more of a hindrance than a useful lens to concentrate this experience through. The result was a nice period piece, one in which we could all enjoy the magnificent visual slice of the Connecticut kitchen (scenic and costume design by Santo Loquasto), marvel at the smell of bacon and eggs actually being cooked on stage wafting all the way up to the balcony seats, and drink in the Irish accents.

The association with the O’Neill play factors into my muddled impression of the piece. This is the third Huntington production in a row I’ve seen (along with Guess Who’s Coming to Dinner and Vanya and Sonia and Masha and Spike) in which the material is based off of or inspired by existing work, yet the audience is repeatedly reassured (in program notes and videos on the company’s site) that neophytes need not be concerned about unfamiliarity, either with the Poitier film or the works of Chekhov or O’Neill. As I sat through this trim, mostly enjoyable show, I couldn’t help but constantly wonder what was the point of the play’s framing device if you haven’t seen Long Day’s Journey Into Night. The unclear answer to this question only contributed to the stagnant, Masterpiece Classic-feel of the story.

The emotional pacing for each of the characters didn’t make matters easier. The arrival of an all-important letter for Cathleen relatively early in Act One didn’t leave her character with much more ground to cover over the rest of the show. Although Meehan skillfully portrayed Cathleen’s frustration and disappointment as fueled with unexpected hope and vigor, the foreshortened character arc made her place in Act Two unclear, almost misplaced.

Smythe’s relationship with Bridget was convincing in its steadiness and tenderness, in its weariness and unhurried quality. But since Smythe never really seems like a viable romantic option for the stubborn first girl, it made Smythe’s departure in the last act lack weight or tragic power. Still, Bridget, consistently unforgiving of herself and often unable to endure what she perceives as the hopeful fancies of her companions, is compelling and the best thing about this play. McElfresh carried the weight of the performance, and the greatest pathos one can find in it comes from Bridget’s dogged insistence on remaining unhappy, self-flagellating and stoically suffering day after day. Her self-determined fate, and her awareness of her inability to allow herself an escape from it, is both tragic and true, and the saving grace of this production.