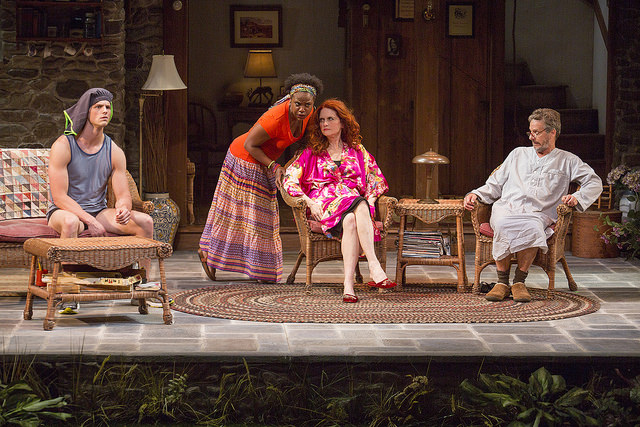 The Broadway comedy Vanya and Sonia and Masha and Spike, written by Christopher Durang and directed by Jessica Stone (based on the original Broadway direction of Nicholas Martin) is a fun modern romp peppered with Chekhov references and further seasoned with tomfoolery and nostalgia.

Two siblings, Vanya (Martin Moran) and the adopted Sonia (Marcia DeBonis), live together in a house paid for by their successful actress sister, Masha (Candy Buckley). After caring for their ailing (and now dead) parents, Vanya and Sonia are coming to terms with being middle-aged losers with no jobs, no aspirations, no love lives, and no real hope for their future. The monotony of their days is interrupted by the matutinal arrival of a blue heron, and the less serene weekly arrival of their housekeeper Cassandra (Haneefah Wood), who likes to live up to her name and make ominous and loud predictions no one listens to (which only occasionally come true). Suddenly, Masha shows up with her new boy-toy Spike (Tyler Lansing Weaks), a buff hottie who is super friendly, dumb as rocks, and has difficulty keeping his clothes on his person. Masha suffers a particularly potent attack of insecurity, wild jealously, and meanness when the adorable, kind, and well-meaning young neighbor Nina (Allison Layman) shows up and disrupts everything by just being present and nice. What follows is a tempestuous twenty-four hours full of fights, reverse strip-teases, costume mishaps, voodoo, and coffee-mug-flinging.

It took me a while to warm to Durang’s peculiar dialogue and the way this cast was interpreting it. While I enjoyed the absurdity of the text, I found the purposefully mannered performances a bit halting and not as funny as they could have been if washed down with some judicious helpings of naturalism. But once the main drama of the piece got under way (Masha’s announcement that she plans on selling the house, kicking Vanya and Sonia to the curb), the silliness of the characters began to really work; the mix of pathos and bathos formed a potent cocktail that actually made me root for this motley crew.

Buckley and Weaks’s relationship was amusing in its age inappropriateness and its ability to make Masha fly into bouts of unprompted rage. While Spike’s character could easily have become stock or stilted, Weaks skillfully infused Spike with genuine friendliness and a wonderfully vapid enjoyment of his own sexiness that actually got funnier as the play moved on. Layman should also be commended for keeping Nina sweet, considerate, and kind of clueless without making her boring in the face of the wackiness that surrounds her. Wood added great energy with her outrageous divinatory antics, spouting wisdom and nonsense in equal degree and infusing physicality into the stagnant Russian dacha (hyperrealistic scenic design by David Korins).

Buckley, Moran, and DeBonis were definitely the acting heavyweights of this production. Buckley carefully calibrated Masha’s rising hysteria, fueled by the ridiculous rivalry she insists on maintaining between her and Nina (and later Sonia) that gets funnier the more threatened Masha feels. Used to being the star of the family and the various Hollywood sets she has worked on, Masha seems subconsciously aware of her status as a waning Tinseltown hack, making her constant invocation of the great Chekhov role she almost played (but never performed) almost poignant in its paltry gesture towards a desire for real artistry. By contrast, Vanya, the gay brother with artistic aspirations he has barely admitted to himself, seems the least likely to give in to the irresistible pull of melodrama when airing out his own grievances. But prompted in equal measure by emotional support from Nina and by lust for and aggravation with the hunky Spike, even Vanya can’t contain his own neuroses, and he has a several-minute-long explosive outburst later in the show. While I was impressed by Moran’s ability to play the needy yet relatively functional Vanya, I found the nostalgia-infused appeal-to-simpler-times-rant a major drag in the play. Durang allows this monologue to go on for far too long, and although the older audience watching with me at the Huntington Theater thought it was a laugh riot, far less would have been far more, and far funnier.

That scene’s counterpoint could easily have been Sonia’s phone call to someone she meets the night before. While I don’t want to spoil the particulars of that great moment, I do want to stress DeBonis’ excellent performance in it. The ugly-duckling-spinster-sister Sonia is utterly hilarious, particularly when she defies the bullying Masha and decides to embrace her own weird self. DeBonis’ imitation of Dame Maggie Smith is probably my favorite thing about this whole production.

While Durang might not be my comedic playwriting-cup-of-tea, these six actors provide a pretty fun night at the theatre. And you don’t even need to know any Chekhov to enjoy it.

The Huntington Theatre Company’s production of Vanya and Sonia and Masha and Spike is playing now through February 1, 2015, at the Avenue of the Arts BU Theatre.