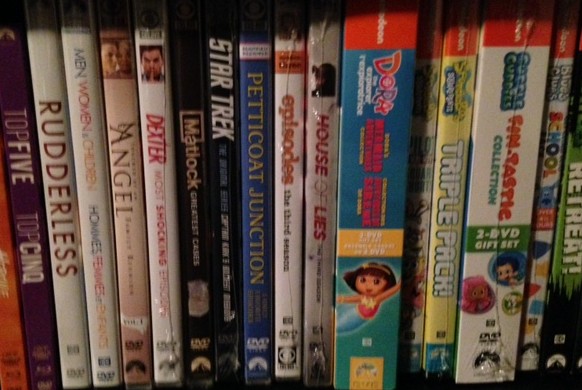 It’s time, once again, for the TV on DVD series featuring new releases from Paramount… not technically limited to TV, but we’ll start with TV:

Kids TV
The beginning of 2015 is bringing with it a huge boom in Children’s programming out on DVD. Two Sponge Bob box sets hit the market in consecutive weeks in early January- the first a collection featuring 42 shorts, a mini-movie and the pilot that started it all; the second a collection that could have been called The Essential Sponge Bob featuring hand-picked episode in three themes (“Happiest Moments”, “Heroes of Bikini Bottom” and “Legends of Bikini Bottom”). Also in early January came a comparable collection for those who prefer Dora to Bob, this one all about mermaids, featuring the original “Dora Save the Mermaids” and its sequel “Dora’s Rescue in Mermaid Kingdom”.  Just last week, Bubble Guppies: Fin-Tastic Collection hit the streets for the younger kids with a new Turtles adventure (“Retreat”), Blue’s Clues (“Get Clued Into School”) and the final instalment of The Legend of Korra (“Book Four: Balance”) right behind.

TV Seasons on DVD
The weakest segment of Paramount’s latest releases is usually my favourite- full seasons of TV. This is why TV on DVD is so great! Unfortunately, very few full seasons have made it to market lately with this batch of discs limited to the intensely mediocre House of Lies (season three) and the wonderful Episodes (also season three). I was psyched to see Episodes arrive (especially season three, which was really pretty great) but House of Lies? Every time I see Kristen Bell and Ben Schwartz on this show I cry a little on behalf of all the brilliant projects they could be doing instead of this unfunny and extremely depressing comedy. Season three’s brilliant guest star roster (Eliza Coupe! Jenny Slate!  Fred Armisen!) just makes the sadness deeper.

TV Episode Collections
Here is where Paramount has been shining lately- special episode collections. In some cases, this is absolutely the ideal way to be handling the changing home video market, curating “best of” discs for fans who still want the feeling of owning their favourite show but who don’t want to commit to the oldschool format for full series purchases when they could just binge on Netflix. This has been working for awhile when it comes to Paramount’s many many Star Trek releases (the latest is Captain Kirk’s greatest episodes from the Original Series) and is a great idea as it pertains to repetitive shows like Matlock, Petticoat Junction and Touched by an Angel (all of which have episode collection DVDs hitting the market this month; Petticoat‘s is called the “Family Favorite Episodes”, which is kind of hilarious). The format makes less sense to me as it pertains to Dexter. That’s a contemporary, highly serialized show. No one wants to watch just 10 episodes of Dexter, none of the storytelling would make any sense and it’s not as if individual episodes are particularly fun to watch (they were satisfying in a larger story sense, but not as standalones). “Dexter‘s Most Shocking Episodes”, therefore, isn’t much less of a waste of time than “Mad Men, Just the Pitches” or “Breaking Bad: The Best of Marie”. If it’s about the big picture, don’t release just bits and pieces.

New Release Films
Three solid, relatively low-profile but still star-studded 2014 films of widely varying quality make up Paramount’s big film releases over the first few months of 2015- William H. Macy’s directorial debut Rudderless (an uneven but emotionally poignant and surprising film that ranked 24th out of 110 films on my Cinematic 2014 list), Jason Reitman’s preachy internet-age ensemble dramedy Men, Women & Children (#87- the director’s most misguided work in years), and Chris Rock’s critically beloved rom-com Top Five (which came out too late and in too few theatres to make my 2014 rankings, which is exactly why the DVD release- on March 17th- should be a hotly anticipated one).