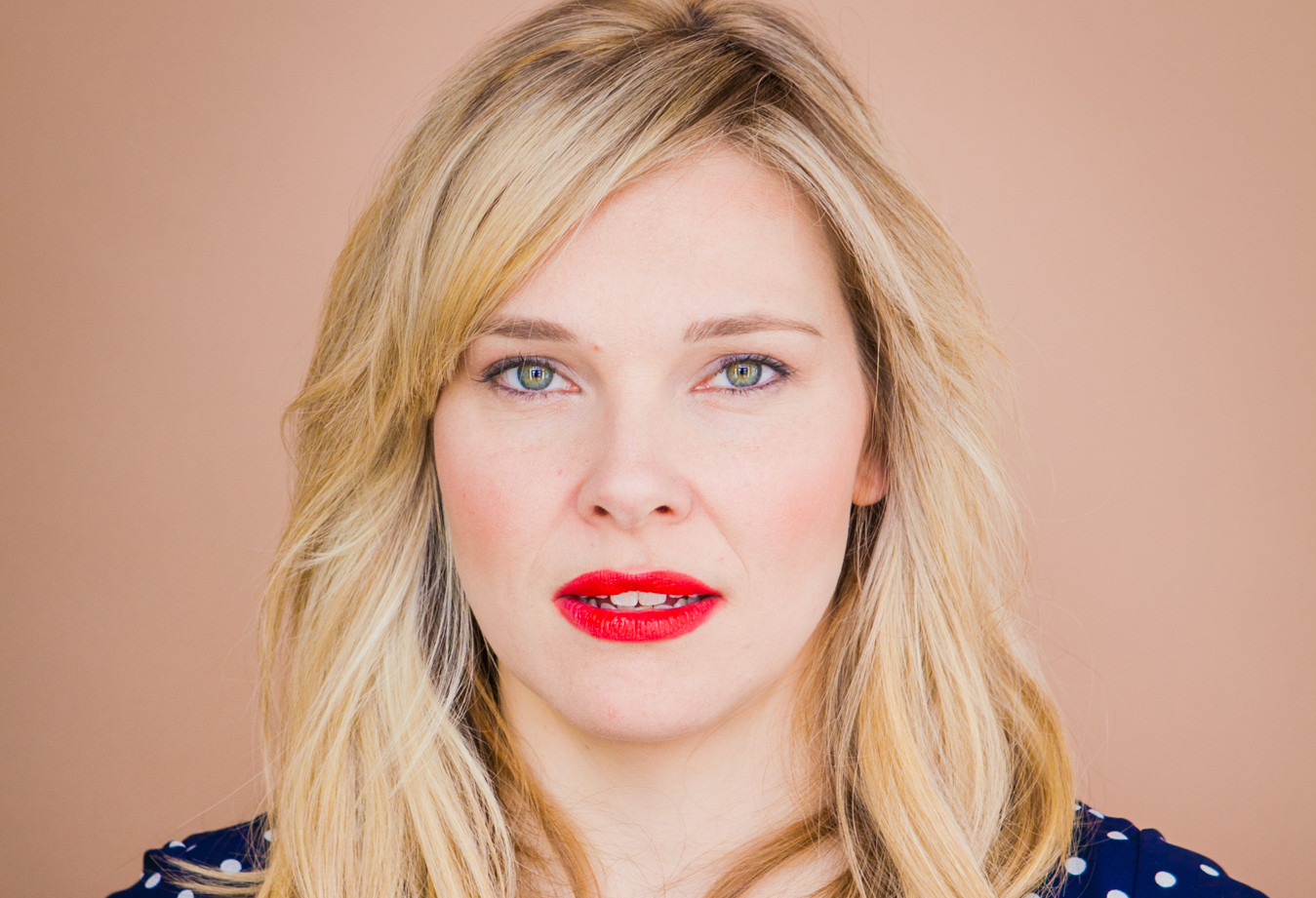 Our Fringe week began with a bang in 2014, taking in opening night of Alexander Offord’s Fringe New Play Contest-winning work Potosi, about sheltered North American corporate interlopers in a civil war-torn country. There we encountered one of the most indelible performances of the year- Nicole Wilson as a fierce and unflinching problem solver intent until her very last moments on letting nothing stand in her way.

We talked to the Best Actress nominee to get her take on the play, the part, and the controversy that quickly sprung up around them both.

Can you remember the first theatre production you ever saw?
oy…nope. I can’t. Wow, that’s strange…but I really cannot!

Where did you study/develop as an actress?
I started out as an improviser at Bad Dog theatre and Impatient Theatre Company. At that time I was performing or teaching improv every night of the week and still working a 9-5 job. Eventually, I realized that I couldn’t continue in my 9-5 world and I quit my job and went to George Brown Theatre school.

What’s your favourite role you’ve ever played?
Wowza. I have a few. LeBlanc in this show, Potosi, is definitely one of my favourite roles I’ve played. I also loved playing Catherine in Waiting for the Parade. The thing I love about both of these characters is that they are very smart, strong, and opinionated women on the outside but are extremely vulnerable on the inside. Both characters reach a tipping point during the play and it’s this turn that I love!

I also loved playing Nina in The Seagull at The Berkeley last year. This was a big stretch for me and it was really fun to tackle something so different.

Do you have a dream part you’d like to play one day?
Many. But if I had to choose one it would be Martha from Albee’s Who’s Afraid of Virginia Woolf?

Which directors have had a major influence on you throughout your career?
Robert Wilson – I love his aesthetic.
Jordan Pettle – he really allows actors to work how they need to work before he starts mucking around and I really appreciate that.
Alexander Offord – Alexander and I are partners and I work very physically where as he has an absolute gift for words. He understands the text much faster than I do but he allows me to work through improv and with physical and character extremes before he starts fiddling around. His trust in me as an actor has really helped me to learn to trust my own process and what I have to bring to the table.

Had you worked at the Fringe before? What are some of the best and worst parts of a festival as opposed to a more traditional run?
I have participated in the Fringe for 5 years in total and will be assistant directing the Best New Play contest winner for the 2015 Fringe Festival, Rukmini’s Gold. The best part about the festival is the support in the community. It’s a great way to meet people outside of your usual theatre friends and it’s a great place for experimental work. I hope to see more dramatic, challenging theatre and experimental work in the years to come.

How did you get involved with Potosi?
The writer of the show [Alexander Offord] and I are co-artistic producers of Good Old Neon. When he won the best new play contest, I assumed he would hire a big name to play the part. When he asked me, I insisted that he not ask me just because we are partners and he very adamantly said that he wrote it with me in mind, so I joined the project. We then brought on Sean Sullivan who I had worked with in The Seagull and who just absolutely fit the role of Beamish perfectly. Finally, we found Craig through open auditions. Did I mention that Craig also fit his character perfectly?!

What are some of the challenges of working on a new play?Did the play change at all in rehearsals?
This play was not only a new play but it was also a very challenging text and the characters were quite complex. Some of the challenges were that it had never been heard or played before. As a result there were certain parts that we really had to work through. There was one section in particular that we just could not make sense of on our feet and Alexander ended up rewriting that section to tighten it up.

Potosi has inspired a lot of conversation around the treatment of women and minorities in contemporary theatre. Do you have any thoughts you’d like to add as someone inside the production?
Indeed it has! Good Old Neon hosted a forum last November 2014 to try to discuss some of these issues in an open, safe space. Our resolution was “Be it resolved that theatre should be politically correct.” Guillermo Verdecchia, Aislinn Rose, Mike Anderson, and Matt Sergi spoke at the event. However, some of the people who took issue with the themes of the play did not want to address this in a public discussion. It’s tricky. I guess for me the most important thing is that we be able to talk about theatre and what people find problematic honestly and openly.

Personally, I think LeBlanc is a strong, intelligent woman and I was excited to have the opportunity to play such a part. As a blonde female in my early thirties, I am often being called out to audition for less challenging parts and it was such a gift to be able to explore this type of character. I know that some people think LeBlanc is racist and to some extent she is. I remember how frightening it was when I really worked through and understood her argument. It was scary because I didn’t want to understand her because she’s not a ‘politically correct’ character. The beautiful thing about her is that she is incredibly logical and is able to justify her views of the world in quite an intelligent way. To me, though, it is important that we be able reflect on stage what we see in life. Specifically, if there is a racist, rude, or misogynistic character in a play that does not mean that the actors, directors or writers are racist, rude, misogynists. It simply means that we are exploring the behaviour of that character under a particular set of circumstances. It’s difficult, and not very exciting, to imagine a theatre where all of the characters are written and played in such a way that they won’t offend anybody.

It’s a really intense and troubling piece of theatre. What were some of the strongest reactions you heard during and after the run?
The thing that struck me the most was the energy in the theatre at the end of the piece. It was often quite quiet and I think that was a good thing. It meant people were thinking. Many people would tell me directly that they either loved it or hated it. I appreciated that. I think challenging theatre yields extreme reactions and I totally understand and expected that. I know it’s a difficult piece to watch and I know that it’s not for everyone. What I valued was the discussion that came out of it.

Did you have a favourite moment in the play?
A few. I loved the turn at the beginning of the play when LeBlanc starts laying down her argument as to why they are not responsible for the rape of the women. The argument is so clear and so step-by-step that it was really fun to spell it out for Beamish.

I also LOVED the moment where Craig (the soldier) makes me undress in order to get a piece of bread. It’s completely humiliating but it’s a gift for an actor. If I was ever in my head or not present, this moment always brought me back because there was no faking it. Acting with Craig was a complete gift. We work similarly so things shifted each night, but we were always right there for each other. It was always very alive.

What are you doing now/ what’s your next project?
I just finished doing a show about ageism called I’m Still Here. It was a workshop production but we learned quite a lot from it and will hopefully remount it later on. I’m also assistant directing this year’s Best New Play contest winner Rukmini’s Gold.

In addition to this I’m trying like mad to find a space for a show that’s been in my head for the past two years about slaughterhouse workers. PLEASE if you know of anything that looks like a warehouse or factory, let me know! We are also hoping to do a remount of Potosi in the near future to clean it up a little and deepen the characters.

Do you have anything you’d like to add?
Thank you so much for the nomination. We really poured ourselves into this show and it means so much to have that recognized.