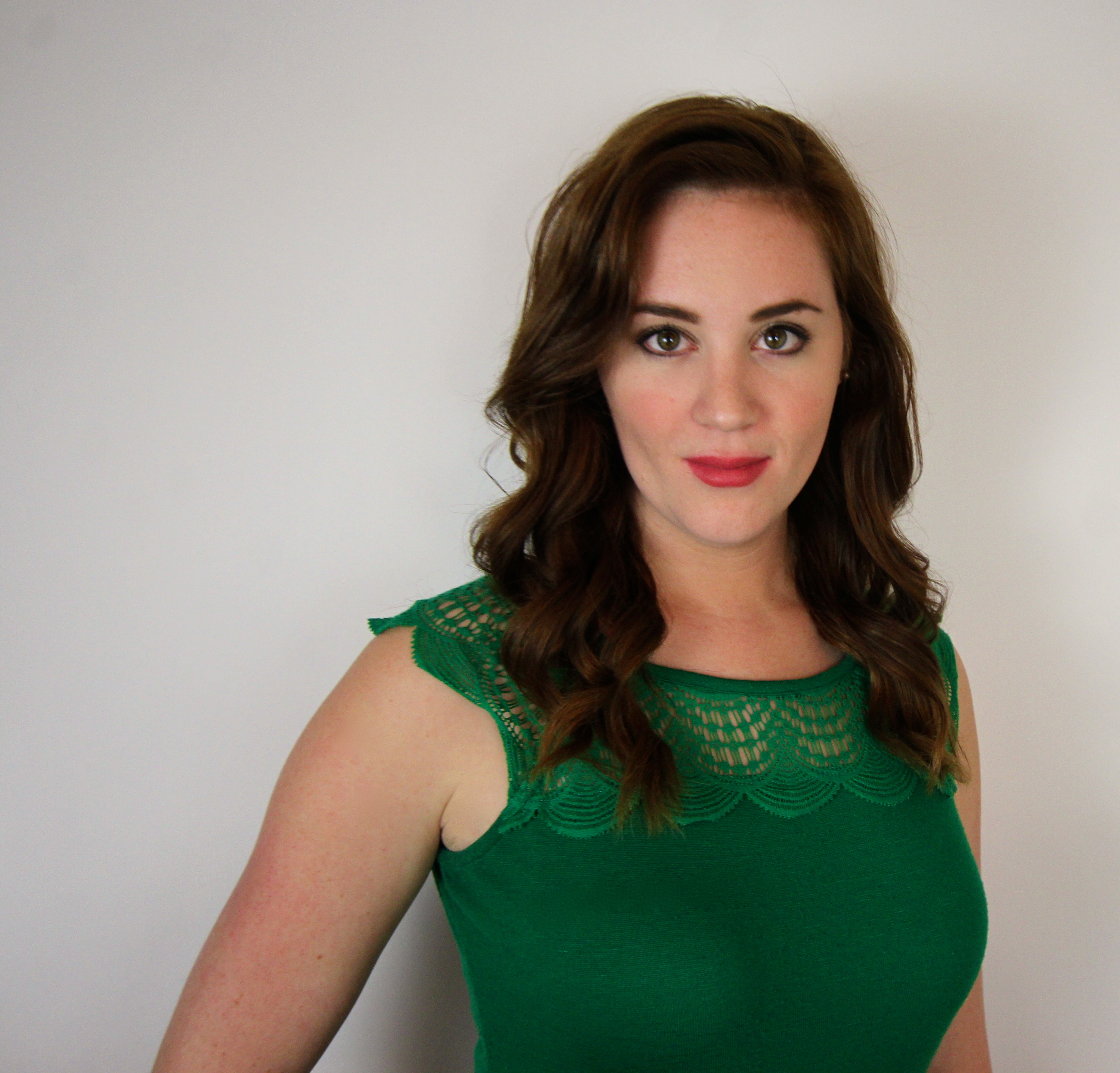 Kat Sandler’s corporate comedy Retreat was bonkers, one of those shows that escalated in comic absurdity long past what you thought was the limit. As a ruthlessly ambitious it-girl who falls down the rabbit hole at a bizarre corporate retreat, Nicole Buscema layered just enough tragic humanity into her brazenly fun performance that the harder we laughed, the worse we felt about it (which is a good thing).

Can you remember your first experience with theatre?
I grew up in a small town where you played sports when you were a kid, or, if you were as uncoordinated as I was, you had to take piano lessons. So, I don’t remember a lot of theatre experiences early on. I had one line as Donkey #3 in my school’s Christmas show when I was in Grade 3. I remember having my heart set on the highly coveted role of Donkey #1 (who got three lines) and being absolutely crushed when I didn’t get it. The first professional show I remember seeing was when my grade six class went to see My Fair Lady at Stratford. I loved everything about it and as soon as I got home I set to work trying to master Eliza’s ‘before and after’ accents.

When did you know you wanted to be an actor?
I decided to try community theatre in high school because I still couldn’t make it onto any sports teams. A friend of mine was auditioning for a show and I went with her and ended up getting a role and that was it. I was utterly fascinated, completely enamored and totally in love. Rehearsal became my favourite thing. I was ecstatic for the run of the show and then felt empty when it was over until something else started up again. I knew then that I wanted to pursue acting. It took me some time (and an entirely miserable Biology Degree) to get the courage to admit it.

What’s your favourite role you’ve ever performed?
Theater school is this beautiful little bubble where you get to perform a ton of amazing roles that you’ll probably never get to play in real life, at least not early in your career, with directors who are unbelievably talented, wise and knowledgeable. I was very lucky and got to play Mary Stuart in Mary Stuart by Friedrich Schiller and was luckier still to be directed by Jeannette Lambermont-Morey. It was a really special experience because that role is highly complex and intricate and her journey throughout the play is heartbreaking. In the real world, actress-goddesses like Lucy Peacock usually play that role, for good reason. Being able to attempt that role that early in my career with someone like Jeannette directing me was something I’ll never forget.

Do you have a dream role you’d like to play one day?
I love playing characters that are crass, sassy, witty, intelligent and contradictory. In other words, characters that remind me of the real women I know and come in contact with every day; women who encompass a full-spectrum of complicated, multifaceted and beautiful human traits. I’m attracted to the stories about the lives of such women, told from these women’s perspectives. Acting in these stories, producing these stories and seeing these stories happen with more regularity are dream roles for me.

How did you get involved with Theatre Brouhaha?
I’ve always been a really big fan of their work, even before they were Brouhaha! Kat [Sandler] and Tom [McGee] were a couple of years ahead of me at Queen’s University. When I was in first year they were the stars of the drama department and I was desperately trying to not fail calculus. Kat has no recollection of this (which is probably a good thing) but I auditioned for her production of Cabaret at Queen’s wearing a bright red spandex shirt, a matching spandex headband and red boots: because if that doesn’t say Sally Bowles, I don’t know what does. Later that year Tom played my father in a forth-year experimental directing scene where his character spent a lot of time hiding under a table crying and mine ended up in a bath tub full of water fully-clothed. While in theatre school I continued to love their work under Brouhaha and it became my post-graduation mission to work with them. I was in a Fringe show last summer and relentlessly and shamelessly asked Kat, Tom and Danny [Pagett] to come and see my show every time I ran into them at the Fringe Tent. They did and then I got the chance to work with them!

What’s Kat Sandler like as a director? How does working directly with the playwright affect the rehearsal process?
Kat is my favourite type of director. Her brain works very quickly and intricately to try to synthesize everything that is happening in the rehearsal room into the best possible version of the play and she does this up until the last possible moment. It’s relentless, fast-paced and very intense. I love it! Retreat was a whirlwind process where we work-shopped, rehearsed and opened a brand new play in about two and half weeks. The time restraints led to a type of urgency and adrenaline in the rehearsal room that was really productive, often because of pure exhaustion. Because Kat also wrote the script it meant that we could change things based on what worked well and what didn’t, as well as how the five actors worked together and how our sense of humour blended with Kat’s. We would try a myriad of ideas, lines, jokes and character approaches and then Kat would re-write things based on what we said and did (and then we would re-work it and change it again, and again!). Often we couldn’t read our scripts after coming back to a scene a second time because everything was crossed out and re-written multiple times. Our stage manager, Lindsay Jenkins, is a SAINT, and somehow kept track of everything and is the only reason any of us ever knew what to do.

What would you say is the most important conversation you had with Kat in developing your interpretation of the character?
My character was an alpha-female who did and said a lot of coldhearted things, which can be really funny but also abrasive. From the start Kat’s main worry, as well as mine, was that she would fall into a negative stereotype and the audience wouldn’t empathize with her or care about her. An early version of the script had Nicole slinging out a lot of really mean and aggressive (but very funny) one-liners and Kat decided early on to cut or change most of them. We had a lot of conversations about how to humanize her and show her vulnerability so that the audience would see the reason for her cold-hearted exterior. To do this we added bits where Nicole talked about the pressures she felt from her father, about all of the insecurities she had and also about times where she felt intimidated by co-workers. It was a constant conversation during the rehearsal process to try to find a balance.

Tell us about working with the actors who played your competitors.
They are pretty fantastic. Michael Musi, Justin Goodhand, Mara Zigler and Kat Letwin are all very talented, hardworking actors and are as generous and wonderful offstage as they are on. I learned a lot from them and feel very lucky that I got to work with them. It was a truly lovely rehearsal room despite the mayhem of putting the show together in such a short time. We got along really well from day one and were very supportive of each other, the process and the show in a special way that I’ve never experienced before. The show couldn’t have happened in that amount of time if that environment didn’t exist.

Did you have a favourite moment in Retreat?
The show started with the four interns running onstage in a blackout carrying the least intuitive folding chairs that have ever been invented. We would then (somehow) open the chairs and when the lights came up we would sit down and each start responding to interview questions in what we called the ‘re-mix’. The re-mix was basically four separate character monologues that had been written out like a musical score and were structured to be complimentary to each other and said simultaneously. We spent an entire day of our very short rehearsal period just working on that so I think we all were pretty proud of it. It always caught the audience off-guard in the best way and was a fantastic start to the show. It was also really, really fun to do; so I think if I had to pick a favourite moment, it would be the ‘re-mix’. My other favourite moment was anytime Kat Letwin’s character said or did anything.

Last summer you played a maniacal mayor at the Fringe Festival. Where did you find your inspiration for that character?
The character was the drunken, hypersexual villain of the show named Nicole Ling McPunjabistein who had a ‘good-girl’ alter ego named Millie. As you can tell from that description, she was a real gem. The show was collectively written by director Sarah Bruckschwaiger and the three performers: Steven Suepaul, Sean Ogle and myself. Everyone had a hand in crafting her and then once we got on our feet it was clear that this character would be most effective when taken to the extremes. The more ridiculous or taboo something was, the more I went for it. The show was a spoof on the recent mayoral race and the past provincial election so I watched a lot of televised debates to get the ‘politician persona’ and to master the set of ‘naturalistic’ hand gestures they all seem to use. The best script material I got was from these debates as well. I would honestly watch the debates, write down things the politicians said and then put it in the script, verbatim. These were some of the bits that the audience found most funny and ridiculous. This was equal parts amazing and sad because we were glad people were enjoying the show but also aware that the source of this material were strong candidates for running our province and city.

What are you working on now or next?
I’m excited to do my first show with Queen’s Players Toronto in June. I’m working on a couple of writing projects as well as producing a show in Sarnia, my hometown, later this year.

Do you have anything you’d like to add?
Thanks very much for the nomination and for supporting Retreat!