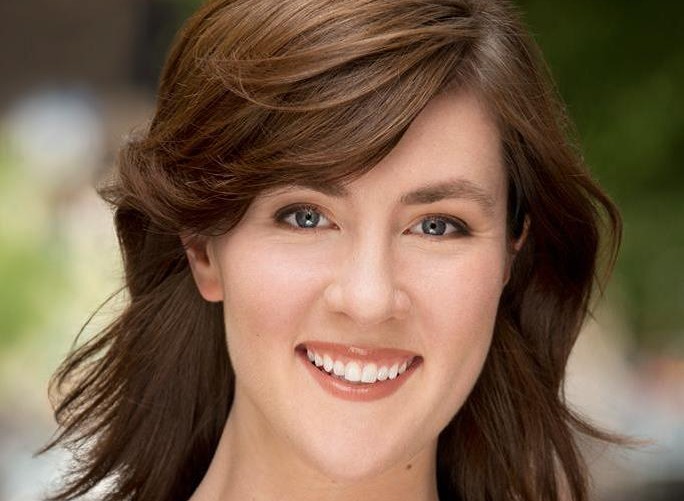 Elizabeth Anne Rimar played (and is nominated for the role of) the pilot prodigy Maxine in New Rep’s production of Tongue of a Bird; gifted at finding lost souls in icy terrains, she struggles to keep a hopeful outlook while battling the demons of a tragic early loss and the personal losses of others who surround her. I chatted with Rimar about the show, the need for more female influences in the theater, and about what actors sometimes do in optometrist offices:

Let’s start at the beginning: what drew you to the maelstrom that constitutes a life in the theater?
I think that I was always born to be an actress. I was and still am a quiet observer of life and those around me. I love to play pretend. Make characters. I was always a nightmare when getting glasses at the optometrist because I would try on all the glasses and change myself and my voice to match the glasses.

I am an introvert. At first, people were confused by my interest of going on stage. But I found that on stage I find myself in other people. I could express what I was incapable of, even scared of, when exploring a character.

Did any particular performances or plays prove influential to you?
Cats was the first show that shook me to my core. I was probably about 8 years old. For me, that was when the magic of theatre hit me. It was a show of joy, imagination, and play. Everything that theatre is to me.

You’ve made big splashes on the Boston theater scene with classic works like Shakespeare’s Pericles, ranging to modern pieces like McLaughlin’s Tongue of a Bird. Have you enjoyed this mix of old and new in your recent stage work?
I thoroughly enjoy the mix! I feel that being a well-rounded actor includes working with both the old and new. The old is still around for a reason and still has something to say, and the new needs voices to express where we are right now.

I can’t tell you how moved I was by New Rep’s production of Tongue of a Bird. What was it like taking on the role of Maxine?
It’s been a year since Maxine and I said goodbye.  And to this day I must say that she was one of the most challenging roles I have played to date. There was so much pain and loss in this one woman’s life. She repressed so much and teetered on the mentally ill. But the thing that held Maxine and me together was hope. There was always hope and we both latched on to it, spread our wings, and jumped.

New Rep is to be commended for staging a work by a female playwright, with a female director and an all-female cast. What do you make of the fact that such a choice is still an anomaly to be praised rather than a more common choice made many theater companies?
I find it mind-blowing. Considering half the world is women, I cannot grasp how our own stories are not being told. Living in NYC and going to audition after audition, all I see are hundreds of actresses vying for one role in a play while there are ten male roles in the play. Even in a scene study class, it was a challenge to find a two-women, 10 minute comedic scene – with both women in their 20’ – 30’s.

Is it still too much of a “risk” for companies to take?
I do not find it a risk at all! The fact that anyone could think there is a risk in people making theatre is ridiculous. Women have stories as well. Everyone has stories that need to be told.

Aside from acting, you also excel at voiceover artistry, and have experience with various dialects. This may sound like a silly or basic question, but I was wondering if you could explain, from your own experience, why vocal training is important to any actor and their craft.
Not a silly question at all. For me, it is like any skill. You have to practice to keep from getting “rusty,” and also in training and practice, you find and learn new things.

What’s next for Elizabeth Anne Rimar?
Well, let’s see. I made the big move from Boston to New York City right after Tongue of a Bird closed. I have been auditioning and taking classes. Little readings and jobs here and there. So, who knows?