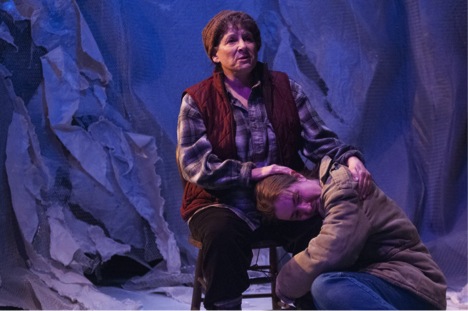 A pale, uneven, crinkled backdrop topped with white crocheted nets (like a fisherman’s? Like jagged clumps of snow on a cliff’s face?) hung on the right wall, viewed from my seat on one side of the traverse stage; a bright line lit up the opposing “wall,” a sturdy wooden chair resting at its base. The hues throughout the evening were an icy blue. On the wall, on the painted slice of the floor, the atmosphere felt like a meeting of sea and sky.

The intimate space of the Arsenal Center’s Black Box Theatre had been transformed into the wintry Adirondacks (scenic design by Courtney Nelson; lighting design by Dan Alaimo; projection design by Matthew Haber). A twelve year-old girl has gone missing, and her distraught mother has called in a young search and rescue pilot with a perfect record to find her. The play, Ellen McLaughlin’s Tongue of a Bird, is a story of mothers and daughters, of grief, of the ravages of mental and emotional scarring. Most of all, it is a story of loss; deep, searing, agonizing loss that cuts so deep and clean, it almost leaves no trace behind. Almost.

The search mission takes the pilot, Maxine (Elizabeth Anne Rimar), back to her childhood home, a home forever shadowed by the suicide of her mother Evie (Olivia D’Ambrosio) when Maxine was quite young. Maxine’s only familial tie left in the area is her grandmother Zofia (Bobbie Steinbach), a Polish refugee that survived the 1939 Nazi invasion, a woman who has known more than her fair share of tragedy. Despite the complicated love which grandmother and granddaughter have for each other, it is clear Maxine is only drawn back to these mountains for a special job. The woman who has hired her, Dessa (Ilyse Robbins), is ready to do whatever it takes to get her daughter, Charlotte (Claudia Q. Nolan), back. This woman is no weeping archetype of maternal grief; Dessa is hard, restrained, single-minded, contained. And that makes her pain so much harder to watch.

The same could be said of this whole production, excellently directed by Emily Ranii. I was mesmerized by these five women, as they weaved their narratives together onstage. I could not take my eyes off of Rimar, whose physicality was so powerful, expressive, and genuine that I found myself staring even during moments when she was still, listening to other characters, supposedly passive. Maxine is a fully fleshed-out character with plenty of moments for sarcasm and light humor amidst the processing of her own trauma and her observance of the trauma of others. Rimar hit each note, big and small, with precision and skill; despite the great ensemble cast, she is my main reason I would encourage everyone to see this production.

Robbins also embodied this strange and wonderful ability to be hyper-controlled and yet never dull. Even when Dessa finally begins to unravel in mourning, finally reveals the deep well of despair that she has been holding back, her anguished rage was infused with such dignity that it brought tears to my eyes. The performances of D’Ambrosio, Nolan, and Steinbach helped balance the body of tension Rimar and Robbins brought to the play, shifting moods and bringing softer yet equally potent elegiac and comedic tones to the stage. It was especially gratifying to see Steinbach (whom I had only heard speak in early modern verse in her multiple wonderful performances with Actors’ Shakespeare Project) embody the wry and wise Zofia so gracefully.

I’m a sucker for clean staging, and shows don’t get much more bare bones than this. How do you evoke the constant taking off of airplanes? Have an excellent sound design (Edward Young) and train your actors to evoke a take-off with a wooden chair (go see the play and you’ll see what I mean). Need to evoke dream sequences without the cumbersome use of a bed onstage? Shift perspective by standing on a chair on the far left wall. There were many other instances of such creative staging that kept the play going at a good pace and kept our focus on the acting.

And that was the most rewarding thing which New Rep left me with that night. McLaughlin’s play is more of a layering than a straight shot; her characters fill the gaps left in their lives with stories, their own retellings and reshaping and deliberate deletions. In this staging the characters often spoke across the stage to one another; were they unable to connect, or unwilling? In this world, to connect is to (almost) instantly lose, and this is a sacrifice we aren’t all ready to make (or make again). The way we handle grief may vary, but the paradoxical impulse to simultaneously guard and expose ourselves to our own painful past is a shared one. This production of Tongue of a Bird was performed poetry, infused with beauty, pain, and truth. I can’t recommend it highly enough.