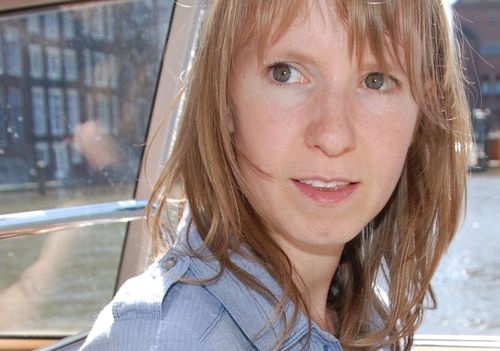 One of the standout productions of the annual SummerWorks festival was a bold and urgent adaptation of the myth of Antigone. Wrangling a huge ensemble cast and an intellectually and technically demanding text, Cole Lewis crossed practical direction (strong pacing, smart blocking) with thoughtful invention (the most memorable entrances in recent memory) to helm a play that toppled expectations of a festival production, played a large part in defining SummerWorks 2014 and earned her a Best Director nomination in this year’s awards.

Do you remember your first formative experience with theatre?
When I was a kid you could put some change in this vending machine that was a mini-theatre. It had one show in it’s repertoire: Punch and Judy. There might have been a crocodile too. All I remember is a stick waving, lots of yelling and laughing like crazy. I’d watch those puppets for as many allowances as I could save up. I’m not sure what this says about my six/seven-year-old self…

Why did you choose Anne Carson’s Antigonick? What intrigued you most about the play?
I admired how Anne Carson remained reverent to Sophocles’ spirit but not his exact words. She shortens and paraphrases the chorus. She comments on Antigone from a modern perspective. She uses language that is self-referential and sparse. Carson’s words tell a raw, emotional story. And I wanted to direct that story.

But even more so, I admired the graphic presentation of Antigonick. There is no font in the publication. Rather, text blocks are hand-inked by Carson. Text is sometimes crunched without spaces as though the characters’ thoughts are spilling onto one another. At other times, the pages are blank, devoid of thought — A landscape of white the reader must journey over to discover a character’s next thought. There are also stunning illustrations by Bianca Stone. Printed on vellum these drawings overlay the text in ghostly aberration, disrupting our experience of the text and our concrete understanding of the story. And I wanted to tell that story using that graphic presentation.

I guess you could say, Antigonick as a whole — in it’s entirety, as an artifact — intrigued me. I wanted to dare myself to direct something as bold as the book itself was.

Tell us about your vision for the play. How did you land on your aesthetic interpretation?
My overall vision came from the book. I wanted to stage the artifact which meant I needed to look at more than just the dialogue. And, maybe it’s just my temperament, but I’m always more interested in the action — what the characters are doing to one another to win a better fucking life — then I am in whatever it is they are saying.

In what ways did you diverge from and expand on what Carson put on the page?
I let myself be intuitive and random, which is really an expansion of how Carson approached the book design of Antigonick. And in that way, I thought a lot about war and class. What it is to come home after a war and see all the young men and able-bodied beings dead around you. The tension between celebrating a war’s end and the grief of the dead. Which led me to think about how a war would devastate my home — St. Catharines, Ontario — and what it would look like the moment after the war ended. What our lower middle-class backyards would [look] like. And what the tools of power would be like with unemployed GM workers after such a war.

I also went to Value Village a lot and looked for props that made me giggle.

And Nick. I tried to expand on Nick.

How did you assemble the large cast? Were any of the roles particularly hard to cast?
I held auditions and lucked out. So many amazing talented people showed up. I reached out to a few people. But all luck in the end. I’m always grateful to their willingness to play with me in a room.

Walk us through the rehearsal process of a play with so many moving parts.
Oh my goodness, I don’t even know how to walk you through that. Every play is a different process and every play/cast has it’s own needs. I brought in lots of toys. And we played for 2 1/2 weeks. Serious play. On our feet play.

What would you say is the most important conversation you had with your actors throughout the rehearsal process?
I don’t know if I said it in these words, but this is what I meant: Listening is more important than the how. Know what you want, listen and the rest will follow.

What were you hoping your audience would take away from Antigonick?
Creon’s pain. What it is to be cracked open.

Do you have a favourite moment in the production?
After Antigone’s final exit, the chorus turning every so slowly for “a nick of time”.

And the production where Dmitry threw all those flats to the ground for “you crack me open.”

Do you have any dream projects?
Yes. But all my dreams come in large-cast-size.

What are you doing now/ what’s your next project?
Sitting on my couch after catching my last show at Push/Fingers crossed for SummerWorks 2015.

Do you have anything you’d like to add?
I couldn’t have directed Antigonick without my phenomenal design team, ambitious production crew and sweetly talented cast. While I appreciate this nod, it’s truly a reflection of their passionately dedicated souls.