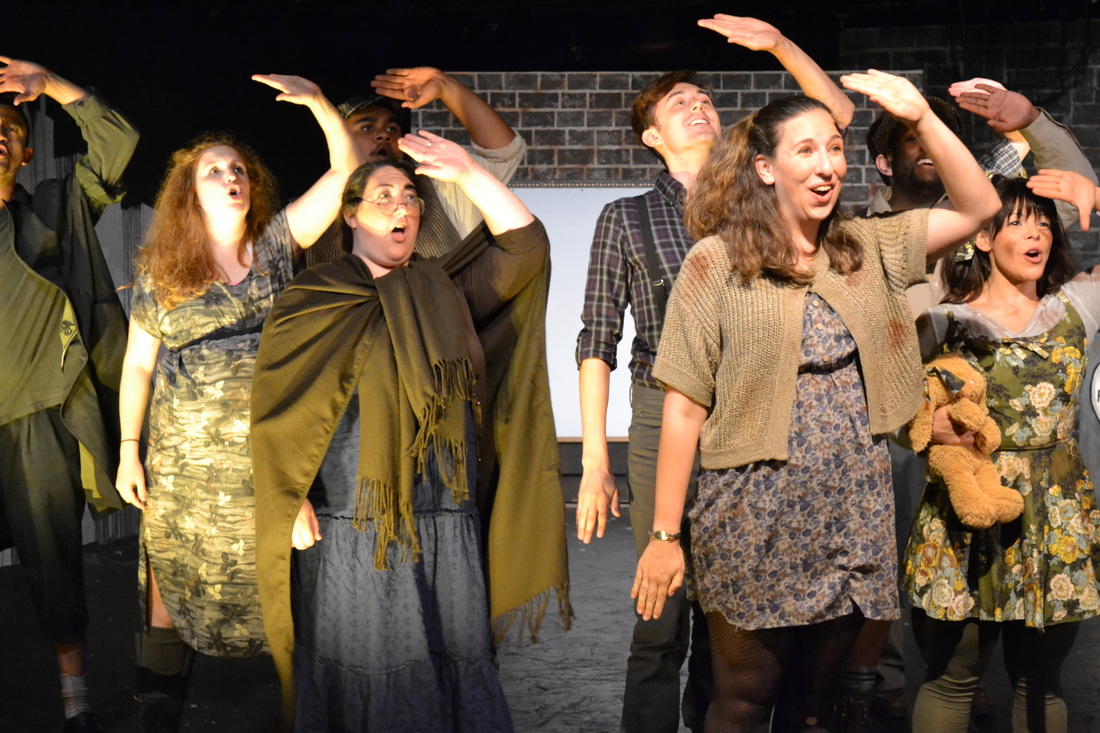 Urinetown is Not Quite Liquid Gold

Urinetown may be one of my favorite, yet under-appreciated musicals. You will rarely see a company attempt this parody of life and theatre (blame it on the piss-poor title). So, when I saw that Burlington Players was performing this laugh-a-minute musical, I had to show up. Unfortunately, they did not. Except for a few stunning performances by some leading actors, the production felt weighted by the musical’s hefty demands. For audience members familiar with the show, the Burlington Players’ production felt like a lukewarm and flat take on the vibrant show; for new patrons to the wonders of Urinetown, the laughs kept coming and they were impressed with seeing musicals parodied and life satirized. Don’t confuse good subject matter for good performance.

Urinetown begins with a friendly Officer Lockstock (masterfully played by Curt Fennell), along with the street urchin Little Sally (Jessica Dee), explaining the detestable circumstances of the town (twelve-year drought, lack of private toilets, megacorporation “Urine Good Company,” and the laws against peeing for free). And after this jarring introduction to this odd musical, we’re taken to Public Amenity #9, where our hero, Bobby Strong (David Lucey), works for the business-gal Penelope Pennywise (Grace Sumner). Unfortunately, today is the day when Bobby’s father, Old Man Strong (Michael Semonelli), just gots to go—and he does, for free, on the street—before getting carted off to Urinetown by the police (this is such an odd musical). We meet the man behind the plan, Caldwell B. Cladwell (Stephen Peters), the CEO of Urine Good Company, and the father to Hope Cladwell (wonderfully performed by Jess Andra), our beautiful and naïve heroine. Hope meets our everyman Bobby, and the sparks fly as they talk about big ideas (like the idea of peeing for free); they fall in love after a brief duet, true musical-theatre style.

And yet, big corporate life and the demands of the proletariat threaten to destroy the love and lives of these simple lovers. Act II brings kidnappings, mad-cap chase scenes, and the discovery of “What is Urinetown?” and a denouncement that no one quite expected. Except the Burlington Players production is pretty expected. Director Russell Greene seems to direct the play with enough humor for anyone unfamiliar with the show, but seems to recycle from YouTube videos and rarely adds his own stamp to this beautiful love song to the musical theatre genre. With plenty of opportunities to explore the many inside musical theatre jokes, the direction feels lazy, or at least weighed down by the other demands for this production.

Lucey and Andra are standout performers, each individually excelling in their musicality and vocal demands. Their characters’ chemistry falls flat, but they are both so charming as these underdog heroes that it’s easy to overlook the lack of a love story between them. It’s harder to overlook how out of their league Dee and Sumner are in their respective roles as Little Sally and Miss Pennywise. Dee focuses on the caricature of the little girl in this “adult” musical; Sumner focuses on trying to hit the right tone in her belting solos. Neither hit the right notes. Peters is mostly successful as Cladwell, especially in his dialogue and humor with his corporate comrades, but he never makes it looks effortless or simple. It’s a chore to be the man with the plan.

The Burlington Players are overwhelmed with the dynamic world of Urinetown on their tiny stage. However, Kai Chao’s set design is a beautiful blend of functional excellence. Each outdoor scene sets the perfect gritty tone, contrasted well with the gleaming shine of the You’re In Good Company headquarters. And it shines under the highlight of the production: Kevin Deane Parker’s lighting design. It is rare to see such high quality execution and thought put into a lighting design. Each scene was not only well-lit but also illuminated themes and ideas in color and tone. I was consistently surprised by such execution, and I look forward to Parker’s next work. The only issue was how much the exceptional lighting stood out in this otherwise mediocre production of Urinetown.

The fault comes partly in the weak ensemble in creating the over-the-top characters necessary to do the story justice as a dynamic world. The jokes and themes fell flat in these ensemble scenes, and Music Director Ian Chin had his hands full navigating these ensemble numbers. Chao’s choreography was excellently thorough and thought-out, but a struggle to execute with a cast who could barely move well; the largest struggle was a lackluster “Snuff That Girl,” an early Act II crowd-pleaser that failed to please. An ensemble which could tap dance and move in the way that Chao can choreograph would have done wonders to making the songs come alive with the brilliance and intrigue of which Urinetown and Chao is capable.

The Burlington Players’ production is not an entire piss and a miss. The audience was enthusiastically enjoying the many musical theatre and cultural jokes infused in the show. As someone who has seen more thorough and well-executed productions of Urinetown, I couldn’t help being disappointed with what I felt was a wasted opportunity to showcase such talents as Andra and Lucey, as performers, and, especially, Chao, as choreographer and assistant director. In a production with an ensemble and space to match such talents, this Urinetown could have been liquid gold.