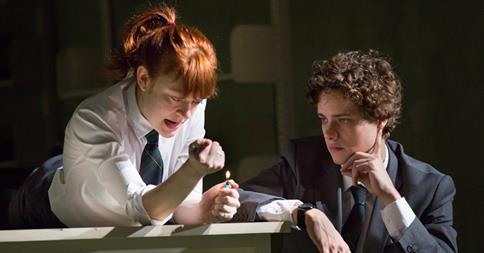 The large number of horrific events that have occurred in the U.S. during my lifetime is baffling. From the Oklahoma City bombing when I was in 2nd grade to September 11th when I was in 9th grade, acts of domestic terror rocked my developing years. Fortunately, school seemed like a haven shielded from the violence. At least, until April 20, 1999. Americans may not remember the date, but I am sure that they remember the school: Columbine. To this day, no one really knows what caused Eric Harris and Dylan Klebold to murder 13 people and injure 21 others at Columbine High School, but their actions shocked the nation. Red Lake, Nickel Mines, Virginia Tech, Northern Illinois University, Oikos University, and Sandy Hook are just a few of school massacres that have occurred in the U.S. since Columbine. After Columbine, tornado and fire drills were joined by “lock down drills” and police officers patrolled the hallways. For many students, the feeling of complete safety in school never returned.

Since Columbine, school shootings have worked their way into various art forms, including MCC Theatre’s newest production Punk Rock. When I say that Punk Rock was startling, unsettling, and generally upsetting, I do not say that lightly. Never before has a play caused me to cringe and cower in my seat. Then again, I have never seen a play that realistically portrayed the calculated murder of students either.

Punk Rock chronicles the lives of seven high school students studying in Manchester, England, their social and sexual interactions, and the disturbing behavior of one young man. Adolescence is a minefield, and Punk Rock throws audience members in the middle of it. The play opens as William Carlisle introduces himself to Lilly Cahill who has recently moved to town. The pair is soon joined by one of the most detestable characters ever written – Bennett Francis – and Francis’ girlfriend Cissy Franks who gives off a neuorotic valley-girl vibe. Rounding out the group are rugby-player Nicholas Chatman, Cissy’s overweight friend Tanya Gleason, and the nerdy and bright Chadwick Meade. Please excuse my labels. These are gross oversimplifications of playwright Simon Stephens’ characters, who are not so easily pigeonholed into classifications like “jock” or “nerd.”

William quickly falls for Lilly, getting up the courage ask her out – only to be rejected. Unbeknownst to William, Lilly has been dating Nicholas. As the school days pass, Bennett’s behavior towards his fellow students becomes more and more reprehensible. From casual taunts to explicit sexual harassment and physical assault, Bennett terrorizes his classmates and alleged friends. The target of most of Bennett’s attacks is bookworm Chadwick, but Chadwick deflects Bennett’s efforts to degrade him with the simple observation that Bennett is but one insignificant child in a world with a whole host of far more concerning problems (think global warming). As the student’s deal with the stress of exams, William’s behavior becomes more erratic and he begins to tell his friends extraordinary lies. After the entire group endures a particularly terrible outburst of sadistic behavior from Bennett, William warns Lilly to avoid school the next day. He returns with a gun to confront his peers.

The remainder of the play is tense. Those who want answers will find none. Is William mentally ill or were his actions caused by Bennett’s ruthless attacks? The catalyst for William’s homicidal turn goes unidentified, which is remarkably unfulfilling. However, the lack of answers reflects an unfortunate truth in life – answers are rarely forthcoming in school shootings.

Not everything works quite so well in Stephens’ play. Certain imagery and analogies are curious. For example, actors wear animal masks during interludes in the play, and William declares during his rampage that humans are the only mammals that require others to police their behavior. Does William have some special respect for individuals who, like animals, stand up for themselves? Are certain “animals” more innocent than others and therefore worthy of sparing? Also, while Stephens has created complex characters that grow and change, as humans do, some interactions are uncharacteristic. For example, Bennett and Nicholas have a quiet moment together and share an “almost kiss” which defies belief. Prior to that moment, Nicholas has very little direct contact with Bennett and is dating Lilly, while Bennett is dating Cissy. Sexual exploration may be one aspect of adolescence, but the sequence is puzzling given the depiction of Bennett and Nicholas throughout the rest of the play.

The incredibly talented young cast of Punk Rock sells this nuanced and dark plot in a way that I have not seen since Spring Awakening. Of particular note is Noah Robbins who delivers a masterful and sharp-tongued monologue on the state of mankind as nerdy Chadwick Meade. Annie Funke similarly shines as the strong-willed but self-conscious Tanya Gleason. The detestable character of Bennett Francis left such a vile impression on me that I might run the other way if I ever saw actor Will Pullen walking towards me on the street (to his credit!). Of the entire cast, only Douglas Smith, who portrays troubled William Carlisle, struggles on stage. Smith’s movements and mannerisms often appear calculated and unnatural – as if he is trying far too hard to convey his character’s emotional turmoil.

Mark Wendland’s scenic design is unwieldy, with large bookcases separating the stage. The bookcases unnecessarily limit the performance space and obstruct key sightlines. However, Japhy Weideman’s lighting design, particularly in connection with Darron L West’s sound design, beautifully captures the energy of the punk rock music played between scenes and the emotional state of the characters.

While Punk Rock is certainly not for the faint of heart, the show challenges audiences to contemplate the struggles of today’s youth and the state of society as a whole. Perhaps the most enlightening aspect of the entire play was the cumulative reaction to the final, disturbing sequence of events. As I half-watched the action on stage through my fingers, I noted the shocked yelps and startled movements of patrons as gunfire punctuated the silence, as well as the general unease of those around me as the house lights rose. I found this unified response, in a small way, hopeful. People still find violence appalling and horrifying. Despite the many occurrences of mass murder in my lifetime, gun violence is neither accepted as commonplace nor rationalized. Until we become desensitized and acclimated to such violence – until shows like Punk Rock fail to elicit responses of shock and unease – there is hope that social leaders, innovators, and educators will find ways to prevent the occurrence of brutal events like those depicted in Punk Rock.