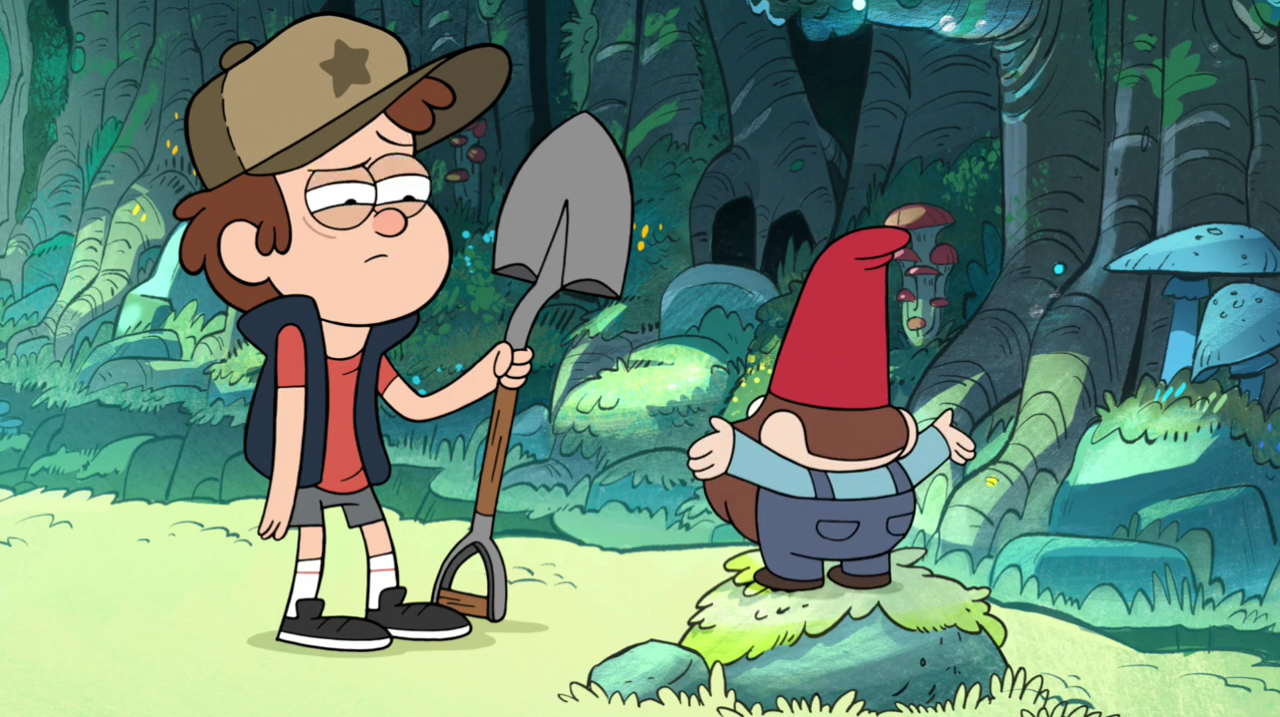 Our season begins with our two protagonists, Mabel and Dipper, already fleeing from some great threat. One key element of this episode that was ditched in later episodes is Dipper’s narration. I am glad they got rid of this, as it doesn’t really add anything to the episode and just seems to over-explain aspects of the story that could have been exposited more subtly. Well, Dipper goes ahead and tells the tale of how he and his sister Mabel were shipped off by their unseen parents to spend the summer with their great uncle (grunkle) Stan in Gravity Falls.

What this episode does rather effectively, is introduce the audience to most of the main characters. Dipper is sort of introduced with more of a blank character template and really only shows off some of his true colours in this episode. We get a chance to see his overly-suspicious nature regarding both Gravity Falls and strangers (albeit for good reason), and his loyalty to Mabel. His character is eventually better developed as time goes on. He also starts off with an awful brown star hat. Thank god it gets lost later.

Mabel, on the other hand, is more of the main feature of this pilot episode (which is another reason why Dipper’s initial narration is misleading, because, at any time, either sibling can feature as the central protagonist).

The plot centres around Mabel experiencing her first true summer romance (which is really a consistent plot element up to the current episodes in season two). Her drive for this romance is pretty amusing and seems to tap into her random nature, since her need for summer romance is borne less out of a search for true love, and seems to stem more from something she’s learned from movies.

We also get a pretty good look at two other characters, Soos and Grunkle Stan. Soos mostly features in the episode as comic relief, which, since the show is already showing signs of being pretty funny, doesn’t seem all that necessary. His character gets better treatment as time goes on but, in this episode, we at least get a glimpse of his gentle giant nature. He comes across as an off-center man-child who can be a close friend to the kids without seeming creepy (think of a not-high version of The Simpson’s Otto).

Now, Stan’s character truly allows the show to demonstrate its comedic chops. He has some of the best lines in this episode (which is fitting, because to me he contributes some of the best comedic elements to the series). We get a good look at his sense of humour and his drive to sucker the tourists. My favourite joke from this episode is his over-repeated shpiel about rock-that-looks-like-a-face-rock.

One unfortunate thing is that Wendy features in this episode but is barely glanced at. She’ll get a lot more development later, but she gets some pretty weak treatment in the pilot.

As stated earlier, the plot centers on Mabel’s wish to find true summer romance, which she finds in a nice teenage stranger. But the stranger acts weird, and Dipper begins to suspect that something might be wrong with the guy.

His notions only become supported when he discovers a secret journal hidden in a tree. This journal, marked with a hand and the number 3, becomes the granddaddy plot element for the series long arc. It contains information on the strange goings-on in Gravity Falls, and comes from some unknown author.

The information in the journal leads him to some detective work on the guy, and leads Dipper to believe that the man is a zombie.

What I think is the most clever moment in the whole episode is when Dipper goes to reveal to Mabel that her boyfriend is a zombie, he accidentally flips to a page on gnomes. Surprise, surprise, when the guy reveals his secret, it turns out that he is just made of several gnomes stacked on top of each other and they want Mabel to be their queen.

After a battle that ultimately leads to this,

Dipper and Mabel flee, which incites the gnomes to reform as a giant beast, nanotechnology-style. This leads to a final battle back at the Mystery Shack, which is won using Mabel’s random silliness.

After an awkward sibling hug,

our heroes are treated to some loot from Stan. Mabel chooses what will be the oft-referred-to grappling hook

And… Dipper gets his new pine tree hat (get it? Dipper PINES! GET IT!?)

The episode concludes with a look at Stan’s secret side, when he enters a secret room

Further reveals about Stan will not be seen until waaaay later in the season, which definitely manages to give the whole season some extra depth and mystery.

Overall, a half-decent opening to the show. It definitely has some kinks to work out, but it shows some real promise towards what it truly will become, and already builds some links towards an ongoing continuity that is lacking in some kids shows. The jokes are already good, and they only get better going forward. If the show hasn’t already hooked you with the first episode, it will almost certainly get you by the next few.

Now, on to the secrets. We have a few more of those illuminati eyes that I mentioned last review, revealed around the shack.

Alex Hirsch also decided to pepper following episodes with the birth-date of himself and his sister (618). The number appears as the Shack’s address, on the cash register when Wendy is introduced, June 18 appears as the date in the Journal, and a whack-a-mole machine in the bedroom has the score of 819 (618 upside down).

A character from a later episode named Blendin Blandin also makes what will eventually be a relevant appearance in some bushes.

Lastly, the decoded cryptogram at the end of the episode says “WELCOME TO GRAVITY FALLS”.