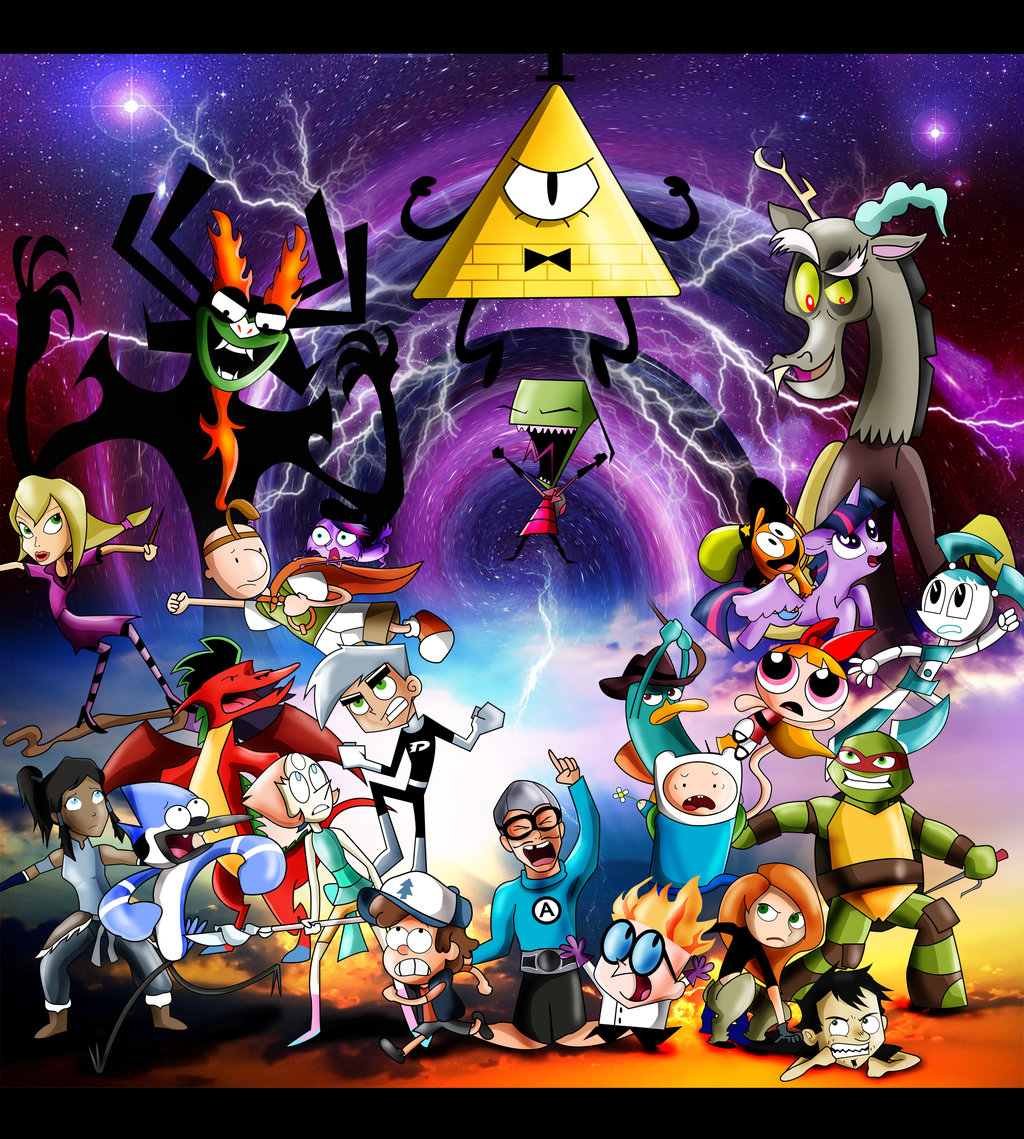 I watch cartoons a lot. I mean, a lot a lot. In the past few years this love has been rewarded handsomely with a slew of great new content. But, it hasn’t always been that way…

In the late 90s and early 2000s, there was a lot of creator-driven content coming out on various networks. Adult Swim was slowly coming to fruition, Cartoon Network and Nickelodeon both had solid and subversive content coming out, and adult shows like South Park and Family Guy were being born. If you’re my age, then you might remember some of the classics like Powerpuff Girls, Dexter’s Laboratory, Invader Zim, Samurai Jack, Johnny Bravo, Space Ghost, Aqua Teen Hunger Force… the list goes on and on. Cartoon-philes were being spoiled.

And then, all of a sudden, it died off. The mid-to-late 2000s were a wasteland where new content just didn’t seem to be getting produced. I was just moving into university life at the time, and there were incredibly slim pickings for good content. I mean, Adult Swim kept some pretty good shows going, South Park remained relatively solid (of course), and Futurama was still good (when it wasn’t being cancelled). Aside from that, all that seemed to be left were shows that were good in their heyday but had grown tired and lousy in their later years (see: Spongebob Squarepants, The Fairly Oddparents, Family Guy and, the show that has reached dead-alive status, The Simpsons).

Cut to the 2010s, and suddenly demand was high for good cartoons and an explosion of new stuff burst forth. Anime had filled the gaps of what was missing in western media, and Otaku culture had almost certainly helped to birth this new era. This is probably why a large portion of this new content has an almost anime feel to it.

Not only was the content new and good, but also an emphasis was made on creating new shows that were creator-driven, in a way that hadn’t been seen since the Cartoon Network’s push in the late 90’s. One of the big first shows was Pendleton Ward’s (once a no-name) Adventure Time, which has reached an almost god-like status among fans, even as it’s merchandise has over-saturated the market. This, coupled with the surprising popularity and brony-ism of the Laren Faust (Powerpuff Girls, Foster’s Home for Imaginary Friends)-created My Little Pony: Friendship is Magic, showed that cartoons that weren’t just pumped out by studios could still be immensely profitable.

Now there are more cartoons than people can count. Adventure Time helped birth several other shows with crewmembers making things like Stephen Universe. As well, Cartoon Network has had great success with several other new programs like Gumball and Regular Show. Disney got in on the action too, bringing back big names like Craig McCracken and Paul Rudish (Powerpuff Girls, Dexter’s Lab) to create Wander Over Yonder and the new Mickey Mouse. On the adult side, amazing shows like Archer and Bob’s Burgers (both involving Jon Benjamin. Coincidence? I think not) have been released, which both owe a slight debt of gratitude to Adult Swim for giving their creators a place to put out their prior shows.

The internet has helped a lot too, both with online networks pumping out shows like Bravest Warriors and fansites/blogs giving fans places to congregate. By doing this, aficionados have become incredibly devoted to their shows. Aspects of fandom, like fan conferences and adult-friendly merchandise, have given many shows (even ones with small cult audiences) multiple ways to make revenue.

With so much out there, after over a half decade of not being able to get enough cartoons, I can’t even keep up with the good stuff. I haven’t been able to keep up with Adventure Time with the rate it gets pumped out, and I haven’t watched nearly enough of great shows like Stephen Universe and haven’t even started watching most of the new good stuff being put out from Adult Swim like Rick and Morty. It’s a new golden era of cartoons that I hope lasts for awhile.

The one I’d like to talk about today has a cult following, but isn’t nearly as popular as it should be. Gravity Falls is a show created by fresh face Alex Hirsch. It follows in the old kid’s tv tradition of making funny shows that are also a little creepy (eg. Eerie Indiana, Nightmare Ned, Billy and Mandy, etc.) What makes this show so special is a mixture of great characters, some dialogue that’s so good it brings me back to the early years of The Simpsons, and a whole lot of heart.

Heart is actually something that I feel runs throughout the new era of cartoon making. After a long period of time where it seemed like most shows got their jollies out of being mean to their characters (Family Guy is the biggest example of this, but even The Simpsons had become decidedly cruel in its later years), a complete 180 has occurred. Shows, like Adventure Time, can be dark but characters are often compassionate and friendly to one another, even if they are enemies. One great example that I keep reading about is how people love the weirdness of Tina on Bob’s Burgers while also loving how completely accepting and loving her family is of her. This is almost always contrasted with the way Family Guy has turned picking on the nerdy Meg into a series-long joke.

Also, good morals have become a key aspect to a lot of shows. Fans, it seems, have gotten over wanting to be bitter and angry and are responding adoringly to shows that share themes of niceness and friendliness (this is actually one of the key reasons why I think My Little Pony has reached the pinnacle of popularity that it has).

Slight aside there, but back to Gravity Falls. This show balances adult humour and kid themes amazingly. Once again I’ll compare it to The Simpsons. When we all were kids The Simpsons had come out and everyone watched it. Some deemed it inappropriate for kids, but, aside from some cursing and sex jokes, it was often a show that was perfect for families to watch. Good morals and an amazing sense of humour pervaded every episode (until it got older). For all these reasons, I am constantly reminded of Simpsons when I watch Gravity Falls. It also seems to be built as comedy show that is dialogue-heavy but seems perfect for families to enjoy together.

Well, after trying to tell you in twenty fucking different ways that the show is funny, I’d also like to share what gives it some of its cult status. The show revolves around two kids who move in with their uncle in a weird area called Gravity Falls (more on the premise in upcoming reviews). This area, including a strange magical book, is full of secrets and codes. The show purveys this through hundreds of references to cults like The Illuminati and actual secret codes hidden in each episode. Each show, and even online video games as well as a cryptic website that no one has explained yet, contain many different secrets. If there’s one thing internet fans seem to love, it’s finding out secrets.

Additionally, the atmosphere of secrecy along with some of the seasons’ story arcs gives the show a bit more weight. It’s been a well-used tool in the past (Sonic the Hedgehog and for the hundredth time Adventure Time), but kid’s shows that slowly weave in backstory and formerly unknown secrets are able to give their tales a sense of grandness that most adult shows can’t seem to. Gravity Falls masters it well and turns what is essentially just a silly and funny show into something that feels epic and mythical.

Well, I think I’ve built this whole thing up enough; lets finally start talking about the show in-depth. My plan is to do short episode recaps while mentioning my favourite things about the episode. Additionally, I plan to mention, at the end of every review, the secrets from the shows. Most of the secrets and cracked codes are posted on various sites, like the show’s wiki, but I’ll post them all here so people won’t need to go searching around.

In this review itself, I’d like to start by talking about the program’s introduction. First of all, it does a better job of introducing the show than most typical introductions do. Audiences are shown weird passing images of a town and its water tower marked “Gravity Falls”. Then our two main characters, Dipper and Mabel, exit a bus. They are dropped before an old man standing out front of a place marked Mystery Shack. The ‘S’ drops off the sign, now saying Mystery Hack, which doubles as a sign that the place is a dump and as a comment on Stan’s character.

That’s already a great way of summing up the premise of the show. These two kids are sent to the odd town of Gravity Falls to live with their scrupulous Grunkle Stan (great uncle). The basics have been revealed in a matter of 8 seconds.

The rest of the title gives the audience to get a little feel for the characters, while also revealing their names. Dipper is shown investigating, Mabel is acting silly and cute and Stan is running away with money and wearing a false eyepatch (for mysteriousness). Along with this, we are given glimpses of monsters, paranormal activity and some characters that will eventually feature more prominently.

As well, we see myriad eyeballs. The symbol of the ‘eye’ is constantly repeated within the intro and the show itself. This makes more sense later, but also is a nod to lore of “The Illuminati” and other secret societies. The mythology of secret, all-knowing groups are regularly alluded to, giving Gravity Falls the feel of a town with many secrets (as well as people who know those secrets).

An even more direct allusion to the Illuminati appears at the end of the intro, when a flash frame of a pyramid with an eyeball, wearing a top hat and bow tie no less, appears surrounded by a code wheel and cryptograms. This character is a facsimile of the supposed illuminati symbol, and features more prominently in later episodes. Later on, this image will be revealed to be a close up image from a page in Journal 2. This flash frame contains several codes and secret allusions that will be detailed below.

We are also given a close-up glimpse of the secret journal Dipper has discovered (more on this later). As well, near the end of the intro, pictures are shown on a table that reference creatures from later episodes as well as other famous folklore creatures like Bat Boy.

One last thing to mention before the variety of intro secrets; I love this theme song. It fits the perfectly-timed intro (not too short, not too long) and gives off a vibe that matches the show. It’s a little strange and eerie, while keeping an upbeat tempo that makes it giddy and fun. As well, one of its main components is whistling, which is absolutely infectious. If you ever binge-watch this show, prepare to find yourself whistling the intro for weeks afterwards.

Secrets
Here are all secrets from the introduction. *Contains some spoilers*.

Okay, that’s it for the intro. On to episode 1!