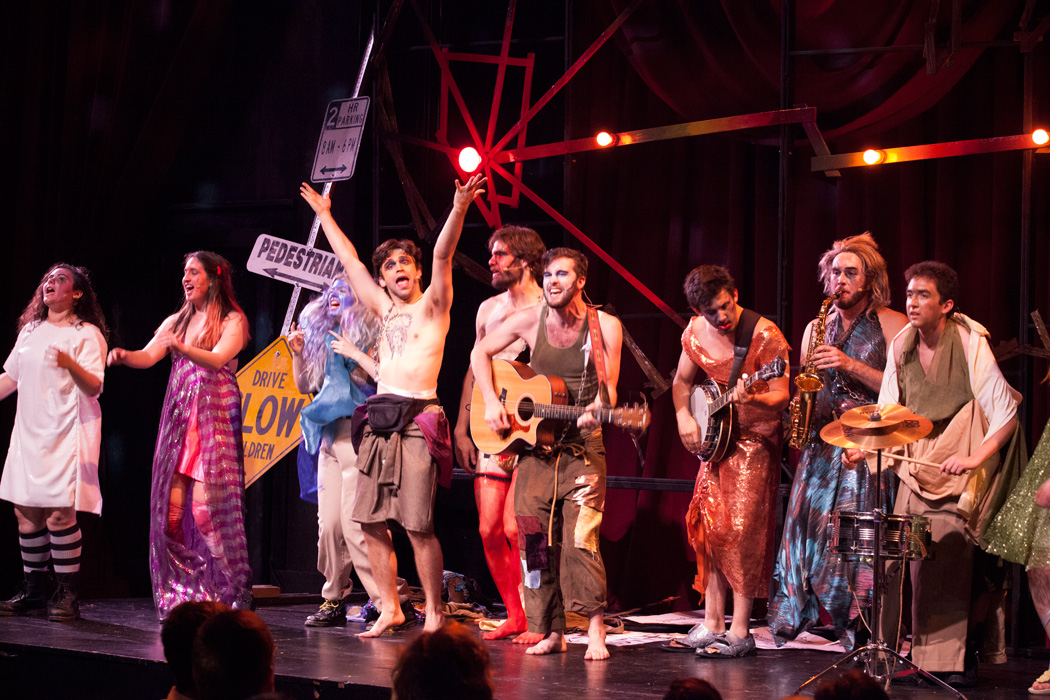 The Oberon was transformed. For this production of Taylor Mac’s The Walk Across America for Mother Earth, music by Ellen Maddow, directed by Christopher Annas-Lee, the Oberon’s main stage was the top of a T formed with an alleyway cutting through the sea of audience tables. A path circled around the two audience clumps. The backdrop of this T was a map of the U.S. flanked by road signs. Pre-show, very friendly servers weaved around tables taking drink orders, while some of the actors performed acoustic guitar musical numbers (“This Land,” “Creep,” “Rivers and Roads”). A cozy beginning to the madcap, drag mayhem that was soon to erupt in our midst.

Taylor Mac is an ambitious playwright, and this play is an ambitious undertaking. The plot seems straightforward: a group of activists band together to walk from D.C. to the Nevada Nuclear Test Site to protest. Protest what? Nuclear proliferation, consumerism, conformity, general injustice, political apathy, corporate interests, you name it. But their story is no more straightforward than a walk across a continent could be. Charles Isherwood put it best when he observed that “for idealists—and for artists—failure and success can look an awful lot alike.” As Annas-Lee put it in his director’s notes, “A Walk Across America will leave America much the same, but the walkers will be forever changed.”

The show is infused with high drama and physical high jinks, and the plot is in constant flux. One minute, we see the activists trudging along, voicing their personal philosophies and political anxieties (in which we hear some great and bizarre one-liners: “We were drowning in a 7/11 Big Gulp cup of yesterday’s coagulated soda!”). The next moment, we see Beeka, a wonderful cellist (and the musical director of the show) playing an appropriately mournful tune as characters recount their “sad” childhoods. Then an argument heats up and an appropriate committee must be formed to resolve it. Even anarchist activists are subject to bureaucracy and points of parliamentary procedure.

The show relishes in such ironies, as it also relishes in bodily effluvia (urine, menstrual blood, dysentery and cancer-induced diarrhea, toe jam, peeling skin, you name it, a character released/ate it). Patterns emerge, such as the hilarious musical and vocal interludes that usefully sign-post “sexy times” between characters, right there on stage. There are drugs (acid, E, speed), there is nudity, there is romance, heartbreak, police persecution, and rape. The humor soon curdles into something darker, something lurking beneath the altruistic impulse to “stand up.”

Some technical issues got in the way of this production. Sound delays in the middle alley made it hard to hear the performers when they were at their most intimate position with the audience. At intermission, in which we were served nutritional yeast popcorn, there was a “Talent-No Talent Show” that felt confusing since audience members were (rightfully) milling about while actors were performing. It would have been fine for the actors to continue to perform during the intermission, but expecting audience responses was not very realistic. And, unfortunately, the second half really lost momentum, and the mad energy of the first half soon dissipated. Still, the show proved a sprawling, dirty, witty (when you could hear the dialogue) piece, with great music, costumes, make up, and questionable morals.