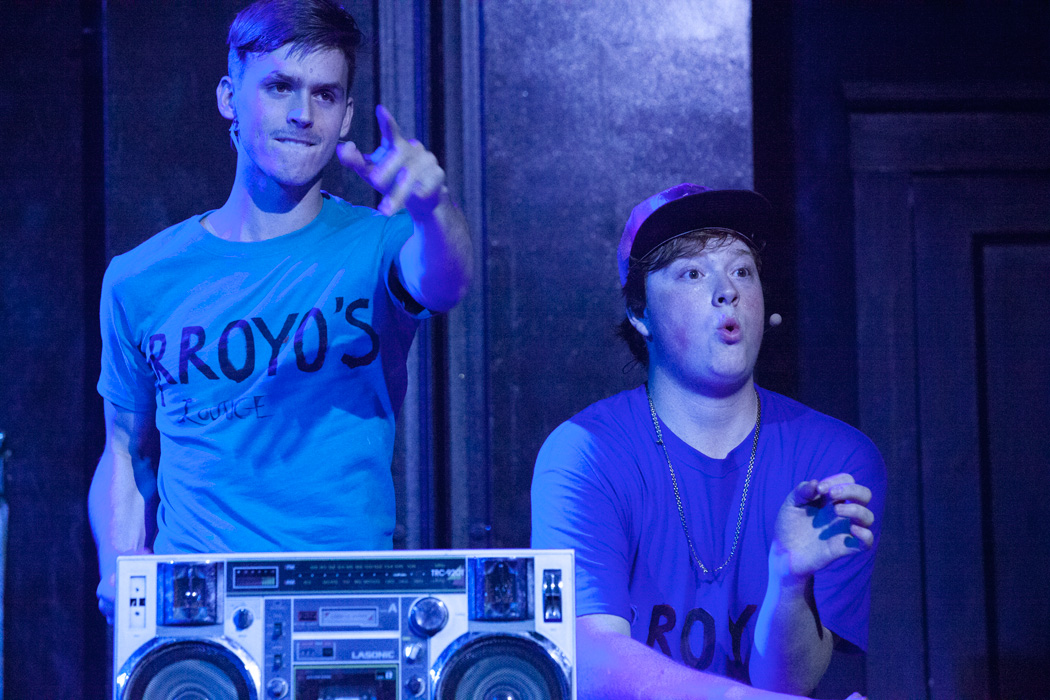 Circuit Theatre Welcomes Us to Arroyo’s

Welcome to Arroyo’s, written by Kristoffer Diaz and directed by Jen Diamond, presented at Club Oberon this past summer. Arroyo’s is a mash-up play and hip-hop show, exploring the roots of this music genre in the context of the lives of certain NYC denizens. Alejandro Arroyo (Dario Sanchez) and his sister Molly (Juani Feliz) have lost their mother, and with her their sense of place and direction. Alex tries to keep her memory alive by turning the Arroyo bodega into a Lower East Side Lounge. Business is not booming. Molly, meanwhile, acts out by spraying graffiti on walls and looking for trouble. She has a particular penchant for tagging the wall of a police station, eventually getting caught by Officer Derek (Justin Harris). Meanwhile, the Arroyo siblings puzzle over the constant and furtive visits of Lelly Santiago (Gail Shalan), a college student convinced she has tracked down the family of one of hip-hop’s most elusive female founders. Presiding over this drama are Trip (Caleb Bromberg) and Nelson (Fletcher Bell), two of Alex’s friends as well as our music-mixers. These resident DJs played and broke character, serving as narrators, remixing the action as well as the music.

The Oberon’s dance floor was divided to form a traverse stage, cutting through the audience and leading to a brick wall covered in graffiti on one side, the bar to the other (scenic design by Adam Wyron). It took me a minute to realize the Oberon’s bar was part of the set as well. A sign hung over it: Arroyo’s. Colorful lights flashed and hip-hop played on the radio as the audience settled around their tables and ordered their drinks before the show began (lighting by Christopher Annas-Lee, sound design by Bromberg and Bell).

While I can appreciate the potent originality of the idea behind this show, the execution was wan, mostly due to a lack of chemistry between most of the characters. The sibling interactions lacked natural fluidity and felt forced. The romantic scenes between Molly and Officer Derek felt repetitive, punctuated as they were with constant swearing and physical violence on Molly’s part, and constant attempts at connection on Derek’s part. I wouldn’t put too much blame on Feliz for this tediousness; for the most part, Molly’s dialogue felt recycled. After all, there’s only so many times you can hear a teenage girl talk about how she’s an “artist” and how she “doesn’t give a shit” before you feel like tuning it out.

Meanwhile, back at Arroyo’s, I felt my frustration with the plodding plot growing. While Sanchez played a convincing, gentle leading man, Shalan’s Lelly became real tiresome, real fast. The breathless, eager energy constantly played for laughs and cutesy awkwardness got very old, and seemed more evocative of an easily excitable twelve year-old than a “fine,” socially inadequate, poser college girl. Shalan played Lelly much more naturally when she apologized to Alex for her relentless research on his late mother’s life. That is, their interactions became much less grating when Lelly stopped gasping for breath, tugging on her hair, and running in and out of the space and instead tried to communicate her thoughts to Alex. Even so, many of the emotional high points in the lounge just didn’t seem earned.

Although we are provided with plenty of scene changes, the slicing and dicing of the action between scenes in Arroyo’s and outside the station failed to sustain interest or energy. When the plot picked up the pace, and there was less to-ing and fro-ing from police station to lounge, things got more interesting.

The “reckless and uninhibited energy” reverberating from the early days of hip-hop (as outlined by Diamond in the director’s notes), is really only embodied in this production by our two friendly, neighborhood DJs. Bromberg and Bell’s wannabe gangster posturing, which I thought I would grow sick of before the play was half-through, became instead the grounding force of the show. They sank their teeth into these roles, and the result was entertaining, amusing, and downright interesting. The awkward interactions between the rest of the characters in the play dissolved into easy punch and humor whenever Trip and Nelson showed up. “It’s cool, we’re comic relief,” one of them stated: I’d go so far as to say they provided general relief. The narrators not only had better pacing and energy, they honestly seemed to have the best dialogue. If the creativity, boldness, and freshness displayed in these two characters were extended to the rest of the roles and plot of this show, I would definitely be interested in sampling a new iteration of Welcome to Arroyo’s.