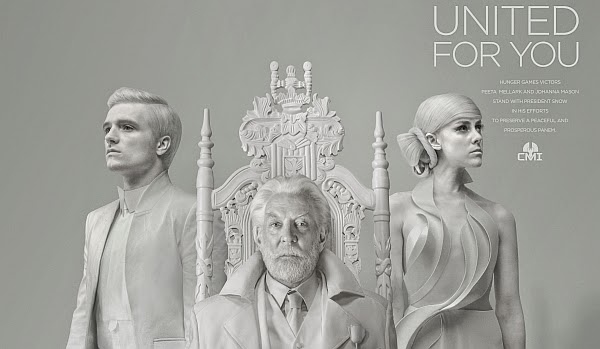 You already know the biggest problem with the newest installment of the Hunger Games, The Hunger Games: Mockingjay, Part 1. It’s right there in that ridiculously long title.

They took the last movie of the Hunger Games saga, and split it in half. This means that the finished film is half the final story, half of Katniss’s final character arch, halfway to the true climax of the series.

The stuff surrounding that half-movie, the rest of it, all the things that have made the first two instalments of the Hunger Games such impressive adaptations, remain there in spades.

We’ll start with the biggest problem with making half a movie: half a character arch. For fans of the book, we already knew this – Katniss spends the first half of Mockingjay crying a lot, slipping between catatonic and uselessly screaming. She’s a puppet of the new regime in District 13. She wails after Peeta, while everyone around her has moved on to accepting the new state of things. When everyone else is concerned with the fate of the world, it’s a little disheartening to have your arrow wielding bad ass whining over one boy.

The movie does its best to move around the fact that its normally active protagonist is a passive, shell-shocked whiner. Jennifer Lawrence remains electric, whether screaming or crying. The movie smartly grounds President Coin, making her a much more engaging presence than at this point in the book (the casting of Julianne Moore helps with this a lot). It really mires us in the minutiae that makes District 13, and uses the threat of the capital bombing to give the movie some much needed tension. It also layers on some pointed media satire that could have easily gotten lost had they decided to only make one movie. This provides for some of the movies funniest moments, and some great opportunities for Phillip Seymour Hoffman to prove why he was such a fantastic onscreen presence.

But the fact remains that Katniss Everdeen doesn’t do much here. The most climactic moment occurs almost entirely without her. This makes the movie feel a lot weaker than I think we will eventually consider it. When we can immediately follow up viewing it with Mockingjay: Part 2 — and remember that Katniss kicks ass, and she’s been through a lot, and everyone should just cut her some slack already – we will probably be a lot kinder to Part 1’s portrayal of the girl on fire.

With the caveat that it is clearly expanding parts that don’t always need to be expanded, I really liked the plot. The extended structure lets them explore the inside politic nature of building District 13 and draw out the pain of Katniss watching the waning Peeta displayed only by capital broadcast. This is great plotting, but it felt like TV.

There was a moment, staring at the erstwhile Margary Tyrell (Natalie Dormer) playing apocalyptic punk video director Castor, when I thought about how amazing this would feel on the small screen. One of the weird side effects of the decided uptick in EPIC television making is that our movies have had to ratchet up their own tension. With Game of Thrones regularly featuring epic battles and mindblowing intrigue, the battles in the Avengers better be UNIVERSE CONSUMING. Ending a Hunger Games movie with a purely emotional gut punch doesn’t feel like the ending of a multi-billion dollar franchise: it feels like the Episode 9 Cliffhanger of a Game of Thrones episode.

That said – this half-movie was great. Emotional, political, daring – the movie surprisingly doesn’t shy away from just how damn dark this story gets. The subplot about the former victors being literally whored out for the capital? It’s there, in all its heartbreaking glory. The rain of bullets? The mountains of dead? The moments of sheer, claustrophobic, terror? They’re all there, making you wonder just what “PG-13” even means any more. It’s ambitious, smart filmmaking that sacrifices none of the book’s bite in making its transition to the big screen.

And while the ending may feel unsatisfying for those of us not aware of how it all ends – it sure as hell is a gut punch. Han frozen in carbonite style gut punch. And it leads brilliantly into the last installment, which I am beyond excited for.

So again. Take a deep breath. Remember your mantra. Buy a ticket. Do it right, and you wont be disappointed.

* And try not to spend too much time thinking about what a blatant money grab it was to split this movie into two parts.