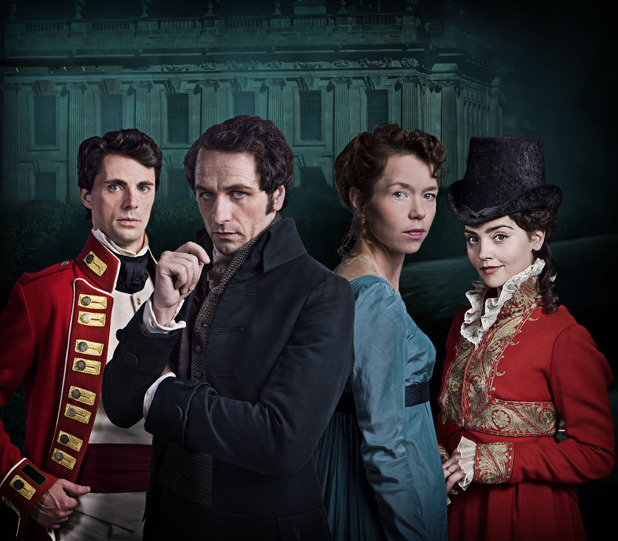 While Part I of Death Comes to Pemberley was a suspenseful thriller that had characters who were not necessarily defined, Sunday’s finale had the opposite problem. It delved into many of its characters, given them some more dimension, but the crime portion of the show fell short. The result is an enjoyable, if uneven series. (Vague spoilers ahead).

Last week’s episode focused more on the crime, this one more on the trial. It meant there was a lot more time to show how the characters dealt with the scandal enveloping Pemberley and the Darcy family. At the center of the scandal, as should be no surprise to fans of the original Pride and Prejudice story, was Captain Wickham (Matthew Goode), who was accused of murder. Wickham and Lydia (Jenna Coleman) were two of the more interesting characters in the series. Last week, Coleman provided superb comedic relief, but with this episode, showed there was some more depth to her seemingly shallow character. Lydia and Wickham were portrayed so their original characters were clearly recognizable, but Coleman and Goode were given the opportunity to give them more dimensions.

Anna Maxwell Martin and Matthew Rhys, (Elizabeth and Mr. Darcy) were also given a chance to expand their characters this week. As the trial went on and tensions rose, Elizabeth and Mr. Darcy started arguing, and finally, the audience was able to get a glimpse of the more fiery sides of their personality. It was very much needed, because while although relationships can make people grow, they don’t change people’s entire personalities, especially in such a short time. Having Elizabeth and Mr. Darcy quarrel was necessary to show marriage hadn’t turned them into completely different people. They are still flawed characters, which is good, because last week, when they were together, they verged on boring. This week though, they were interesting not only in their scenes as individuals but also when they were a united team.

Some of the characters that were supporting ones in the first episode became important pieces of the murder mystery puzzle. And the problem is a lot of them – mostly characters introduced in Death Comes to Pemberly – weren’t all that interesting. If you want to tell a Regency era crime story, that’s a cool concept. But if you’re going to bring a work as well known as Pride and Prejudice into the equation, it’s a little strange that to have so many original characters play such a prominent role in the reveal. A lot of the audience tuned in because they wanted to see familiar characters in a new set of circumstances, not because they were particularly interested in learning about the newly introduced Bidwell family. The Bidwells were at a disadvantage, having to compete with characters many people are already familiar with and in many cases, like. The show didn’t quite manage to drum up enough investment in these new characters.

In addition to the sometimes disappointing characters, the plot felt a little slow. There was a lengthy inquest, then a lengthy trial scene. Unless it’s a legal drama, I’m of the opinion that if you absolutely must show an inquest and a trial, one of them should be very short. What made the show was a lot of strong individual scenes, but as a whole, it things dragged. In addition to the slow plot, the reveal of who the killer was at the end was definitely a let-down.