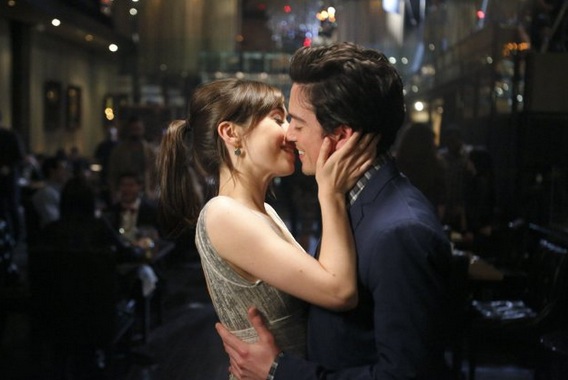 Pilot Watch: A to Z

While we’re all still groaning over what happened to the Mother, her portrayer, Cristin Milotti, has moved on to find love with the guy across the building from her. While Zelda is a completely different character than Tracey, this rom-com once again introduces a mystery. The show is narrated by Katey Sagal, who tells us that Zelda and Andrew, played by Ben Feldman, date for eight months, three weeks, five days, and one hour. But what happens to them after? Do they get married or do they break up? Do one of them die? Hey, you never know, Cristin could be consistent with her characters.

The episode tells us all about our main couple, starting with Andrew. Andrew is the perfect mix of “guy’s guy” and hopeless romantic. He thinks of his parents as the ideal couple and works for an Internet dating site, hoping to connect more couples. But alas, he is alone. Zelda has a soft side, liking cocktail parties and pedicures, but she’s also got a tough side, being a lawyer. Her parents relationship was not like Andrews, since she doesn’t really know who her dad is and her mom seemed to be an adventurous hippie. Which means she’s little more sceptical about the whole dating scene. But alas, she is also alone.

In the pilot, Zelda and Andrew finally meet in the lobby of his building. But twist! They have already met, which Zelda vaguely remembers. Andrew leads her to the relationship labs, where she meets with his boss and informs her that she was set us with another woman but is not, in fact, gay. It does confuse Andrew for a good twelve minutes, and adds a bit of hilarity from his other wise creepy friend Stu. Zelda thinks she remembers where she saw Andrew before, at his desk, as she calls him to let him know it’s messy. Although I’m not entirely sure how she (1) had time to go back to her desk that quickly to (2) discover that it was his desk she was seeing from the building adjacent seeing as he wasn’t there when she called and (3) figured out his number so quickly. Is it possible that she’s also a magician? Because that’s some Criss Angel mind freak stuff she’s got going on.

Their story continues as they have drinks together and an all to eager Andrew remembers where they had really seen each other before. Turns out they were both dragged to the same concert, and Andrew saw a girl who was his type and he wanted to ask her out but couldn’t and now he thinks that girl is Zelda. His all to honest confession of destiny scares Zelda off and she can’t run away fast enough, even lying when she claims she wasn’t the girl he saw in the silver dress.

Andrew then enlists some programmers to prove his theory. He runs into Zelda again and they drop the Baader-Meinhof phenomenon into casual conversation, which is super weird, but also great because I never knew what it was called before. The programmers have bad timing as it turns out because they spoil Andrew’s secret right in front of Zelda. She gets angry again and he discovers he was wrong about her and the silver dress, and even the night the met.

Or was he? When Zelda’s best friend Steffy gets erratic and decides to do the lemon cleanse, Zelda realizes no guy has ever tried that hard for her. She calls him to make up and admits that she went to both shows, and happened to be the girl in the silver dress. And so begins their love story, or breakup story, or, well we really don’t know at this point.

My theory? She gets pregnant instantly, and then they marry. Eight months, three weeks, five days, and one hour is the perfect amount of time to have a baby, just saying.

Verdict? This show has great potential. The actors have great chemistry, and I love that Andrew is a romantic because it reminds me that boys have feelings. Something I often forget. Now if they could just figure out a way to get rid of Stu, A to Z would be a can’t miss show for the romantic in us all. Even boys, because they apparently can be romantic. I have yet to discover this phenomenon though.