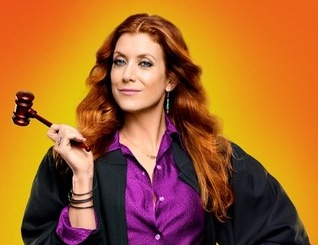 It may not have a great title, or even a great premise, but Bad Judge is off to a good start. The new sitcom follows Judge Rebecca Wright, played by Kate Walsh, as she balances work and binge drinking. It sounds ridiculous, thinking that a well-respected judge could also live a lifestyle similar to those she puts behind bars, but the show balances the absurd with the sweet.

The show starts with Rebecca hung over and late for work, where she eventually walks in, gets the results of her pregnancy test, negative, and asks someone to get her a Gatorade. Not the kind of woman you would want presiding over your legal matters. But something about Kate Walsh makes Rebecca charming and the fact that she’s sleeping with Dr. Gary Boyd, played by the ever-handsome Ryan Hansen, makes me envy her a little. She’s kind of got the best of both worlds going on, the only problem is, there’s no way she could have this many life issues and still be a judge. They aren’t just giving those positions away to anyone that will ask. At least, that’s what I gather from watching How I Met Your Mother and Franklin and Bash.

The softer side of Rebecca is revealed when, after putting both his parents in jail, she helps out a young boy named Robbie when he gets in trouble at school for drawing his teachers in a less than flattering light. Much to the chagrin of Judge Hernandez, she keeps helping out the boy, even though she promised to file a motion for him. She claims she’s getting lost in her speech writing as she’s been tapped to give the Dunham Law Commencement speech. Judge Hernandez becomes so excited for her, he forgets all about the motion. The only person less than impressed with Rebecca’s behaviour is a prosecution lawyer, Tom Barlow. He seems to be playing the foil to Rebecca, but his erratic behaviour makes him seem more like the fool.

The show already has some problems, what with losing their show-runner before the pilot even aired, but it has promise. Perhaps I had lower expectations than I do for my father’s cooking, or maybe I have a soft spot for Kate Walsh and Ryan Hansen, but something about this show just works. The jokes weren’t hilarious, but they worked when delivered from Kate Walsh. If the show can overcome the bad title, and bad premise, Bad Judge has all the makings of a good series. I hope it says a while, if only to see a little more Ryan Hansen on my screen.

[Editor’s Note: I’m so confused; how is this not a sequel to last season’s Bad Teacher, also starring Ryan Hansen? Can Ari Graynor please be on this show too?]