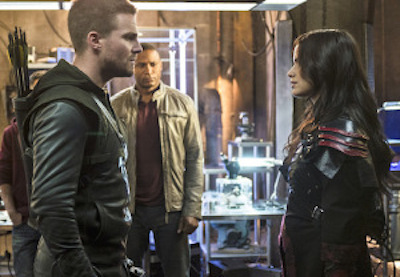 The League of Assassins vs. Malcolm Merlin

Nyssa is back to try and find Sarah, but Oliver tells her that she was killed. Nyssa knows that it was arrows that took her down, and it is Oliver’s mission to work with Nyssa to figure out who killed Sarah; she was in Starling City to track down an enemy of the League, Malcolm Merlin, and Oliver is finally told Malcolm is alive, something we know, but he did not!

Did Malcolm kill Sarah? That would be an interesting twist on things. The League was hunting Merlin, but his death closed off tracking him. Did Merlin know they were onto him?

Sarah was looking for Jansen; she got the information on this man from her dad. Team Arrow plus Nyssa go to track down the Buddhist monk, whose defense on crimes was bank rolled by Merlin. While at his temple, team Arrow finds an even bigger surprise, Malcolm Merlin. I mean I saw it coming, but it adds to the build up.

John Barrowman is a great actor, and I enjoy having him back in the mix; he is just fun in this role.   The big question is whether he killed Sarah or not, and Merlin killed Sarah, but he swears on Thea’s life that he did not.

Thea is Back in Starling City

Thea is finally back in Starling City, and she is re-opening her nightclub with her “investors” aka Malcolm. While Oliver is hot on the trail for Sarah’s killer, family matters get in the way. Thea is making sure that Oliver holds true to his vow of not lying, but Thea is not telling Olver that it was her father who rescued her, trained her, and turned her into the person she is today.

As Thea and Roy continue to bond, not in a sexual way Nyssa takes her, in order to taunt Merlin. Nyssa uses a smoke signal to alert Merlin, and Laurel helps team Arrow track her down too.

Arrow, Nyssa, and Merlin have a three-way fight, and Merlin eventually taunts Oliver to break his vow, but he does not. Oliver states Merlin is under his protection while in the city, and Nyssa states he made an enemy of the League. Leave it to Felicity to show up in the last few minutes of the episode to add much needed levity by asking “What did I miss?” This made the episode even better.

Yet one moment that tops it is the first reveal of Ra’s al Ghul, and his declaring war on Oliver Queen.