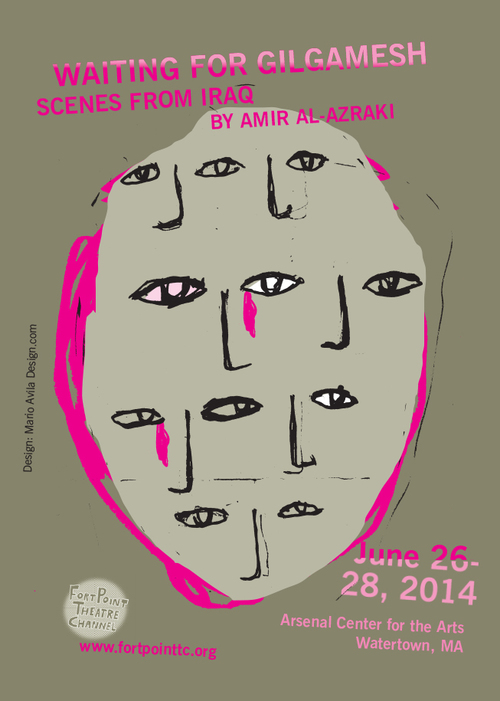 Waiting for Gilgamesh, But Not Counting on It

The audience enters the Arsenal Center Black Box, and is instantly greeted with music. Faraz Firoozabadi (percussion), Stephen J. Lamb (guitar), and Jacques Pardo (composer and sound designer), set the mood as we prepare to enter Iraq, the real and reimagined space offered by Amir Al-Azraki in Waiting for Gilgamesh: Scenes from Iraq, directed by Marc S. Miller. Green and blue painted mosaics decorated the black box floor, and a large sculpted face hung menacingly between thin “trees” to the right of a platform backed by a honeycomb-like wall (set design by Anne Loyer). I was very excited to see this show, presented by Fort Point Theatre Channel, the Joiner Institute for the Study of War and Social Consequences, and the Odysseus Project, and cosponsored by the Center for Arabic Culture. I was eager to discover how it would examine the conflicts that formed contemporary Iraq, specifically the legacy of the Iran-Iraq war (ending in1988), and both the lead-up and aftermath of the American invasion of 2003. Unfortunately, this production did not effectively fulfill its admirable ambitions.

Waiting for Gilgamesh, as the title suggests, contains a mash-up of influences. I already knew the Epic of Gilgamesh is the ancient Sumerian poem that recounts the life of the eponymous king of Uruk; this Mesopotamian work is considered the earliest literary masterpiece in human history. But I struggled to find reference to this rich cultural legacy in the action of the play. Perhaps it was too obscured: it was not until the audience talk-back that I discovered that the face in the trees represented Humbaba, the guardian of the Cedar Forrest, the demigod ultimately destroyed by Gilgamesh. Sadly, I’m not sure that knowing this would have helped me find more cohesion in the work.

The title also refers to Samuel Beckett’s Waiting for Godot, so I expected absurdist influences. The play takes the form of a series of vignettes, avoiding a linear narrative, brought to life by an ensemble cast: Preston Graveline, Sally Nutt, Bari Robinson, Kria Sakakeeny and Kari Soustiel march in formation, sing songs, trudge through adversity, crawl in a mire of want, cower at the hands of torturers and prison guards, and take proud stands as various victims and villains in the ongoing conflict, wonderfully costumed in fatigues, war-torn cloaks, dessert-colored tunics and heavy boots (costume design by Julie Dauber). Behind all this action, various titles (words, photographs, arabic script, etc.) were projected on the honeycomb wall (mask and projection design by Hana Pegrimkova and Mario Avila). A few examples: “1987: War Zombies”; “A Baath Office”; “Baghdad 2003.” These titles, coupled with various songs, made me suspect Al-Azraki was also writing some heavy doses of Bertolt Brecht into the mix.

This new play seeks to educate audiences about what is happening in Iraq, why it is naive to assume American military action is the cause of all of Iraq’s maladies, and how education is the key to moving forward from past bloodshed and current misdirection. As I sat in the audience, I thought about the fact that just a few weeks before, ISIS, the Islamic State of Iraq and Syria, had taken over the city of Mosul, causing the Iraqi government to lose control of its border with Jordan and Syria. These were tense times, and American audiences could use all the background and artistic nuance they could get.

But this show did not rise above the level of allegory. As we say in Venezuela, the play neither did the washing nor lent the basin: it avoided creating dramatic sympathy for its many characters (in true Brechtian style, meant to alert us to real issues), but it also failed to inform coherently or potently (also in Brechtian style) about what has happened to Iraq. Certain musical numbers did evoke an alienating dissonance along with social commentary (e.g. presenting the different Iraqi political parties as clown acts, effectively re-enacting the circus of puppet politics), but other moments felt light-weight and a little obvious (e.g. having soldiers break into a round of Marley’s “Get Up, Stand Up” to show their desire to, well, stand up for their rights).

Conflating Brechtian epic theatre with Beckettian absurdism led to pronouncement after pronouncement (e.g.: “Don’t preach to us, preach to the foolish Americans!”) without build-up, resolution, or much coherence. The dialogue got more fragmented as the performance went on. I began to wonder what one could learn from this performance piece if one was the least bit knowledgable about the inner factions of the Iraqi conflict, and the role America played in exacerbating, not creating, those factions. While I would normally not evaluate a theatre performance on its effectiveness as a “school lesson,” I didn’t feel this performance was focused on offering much else to the audience. The play didn’t work either as entertainment, agitprop, or satire; there was tragedy, to be sure, but I didn’t know where to anchor it. While I commend the actors for embodying a multiplicity of voices and perspectives (special mentions for Sakakeeny and Nutt, the strongest performers), I felt frustrated at my inability to make sense of it all.

One of the few vignettes that felt coherent and moving and not allegorical was a scene in which a mother steps out from a crowd of mourners to bewail the loss of her son, murdered for his role in offering translation services to “the wrong people.” The fact that many are punished, not for acts of violence but for facilitating communication and further understanding, was a painful realization meriting discussion.

The pun in the title Waiting for Gilgamesh was not lost on me, but while many audience members may be familiar with Godot, not everyone is familiar with the Epic of Gilgamesh. In the after-show discussion, I was dismayed to hear one of the actors thank the playwright for explaining Gilgamesh’s backstory (right then and there) and how it related to the work. If the actors were not required to learn about how the poem related to this new work, I guess it wasn’t surprising that the ultimate result of reading Iraqi culture and history through the frame of epic and absurdist theater was equally opaque. I hope Al-Azkraki continues to portray Iraq’s rich history to broader audiences: I just hope his future work is more grounded and less diaphanous.