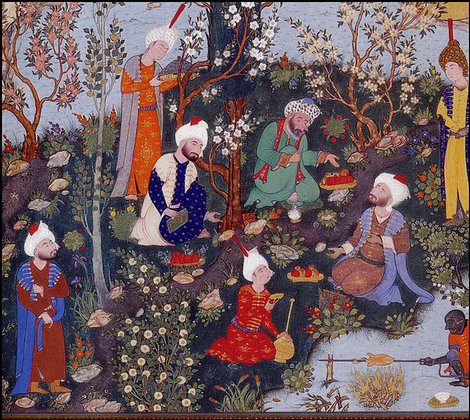 Hidden in the middle of a quiet, tree-lined street in Cambridge, there lies a secret gem of artistic work. Touch Art Gallery, an intimate gallery of contemporary international artwork, specializes as a haven for Iranian art and culture. Lush and bewitching paintings line the hall walls and provide a backdrop for lectures, film screenings, and, this past weekend, a theatrical event. The Boston Experimental Theatre Company (BETC) presented its adaptation of the great epic poem Shahnameh: The Persian Book of Kings. The gallery cements the atmosphere for this brief but enrapturing piece of theater.

The lights dim and we hear low groans and the faint ringing of a bell from the back of the hall. Slowly, four people in masks walk toward a cushioned platform, glaring at us through the holes in their masks. The masked creatures gyrate and moan with a hypnotic pulse and rhythm. One tight, grinning face blends into a taut, white mask. Three of the creatures unmask and wander to instruments, scratching the surface of a cello and strumming the keys of a piano, as a fourth figure in red contorts and convulses, gaining strength and energy as she rises to speak.

This goes on for several minutes before we get anything resembling the story of Shahnameh. But its enrapturing theatricality fascinates and lures us in, fueling a mythic, otherworldly sensation of a distant land. And these sounds and movements continue after the narrative begins. The Shahnameh of the poet Ferdowsi, known universally in Iran but largely unheard of in America, is the Persian equivalent of the Odyssey or the Iliad in scope and reputation. It recounts the story of Persian civilization through the mythologies and histories of fifty monarchs, from the first man on earth to the end of pre-Islamic Persia. BETC’s  production enacts the first three stories of the Shahnameh, in which Keyumars, the first king of earth, loses his beloved son to a demon. The grandson of Keyumars avenges the killing by leading the animals of the world to destroy the demon.

Deniz Khateri, playing the figure in red, tells the story of Keyumars with the text of an English translation of the epic poem, continuing throughout her performance those enticing movements and noises from the prologue. Khateri recites a bit of text, and then moves with the story, flowing through extended sequences of body and vocal work. She never outright acts the story she tells, but rather captures the spirit and emotion of her narrative, cackling as an animalistic figure upon a period of excitement or slowly caressing a bag of fabric when tragedy strikes. Alongside her, three musicians play semi-improvised music in response to her actions, with Pouya Shabanpour on percussion, Eden Rayz on cello, and Bahar Royaee on piano (Royaee also music directs and composes the score). Under the direction of Vahdat Yeganeh, the performers flow with each other’s energies and intuitions, collaborating on a semi-improvisational, ever-hypnotic performance. Despite its improvisational quality, every step, every grace or twist of a limb, every utterance of sound rings with specificity and purpose. For all the non-literalism of the piece, I follow the story exactly, since every motion emerges organically from the performers and ideally suits the emotion of its moment.

After the hour-long performance and a reception in the art gallery, BETC offers another hour of scholarly discussion on the original Shahnameh and a talkback with the artists as the second half of the evening. It’s a wise balance to have this much time dedicated to processing such an experimental piece, creating a well-rounded evening that is part theater performance and part community engagement. At the talkback, Yeganeh describes BETC’s Shahnameh as a work-in-progress, in continual development. The company will expand and develop the work, exploring more of the stories in Ferdowsi’s poem and soon developing the play into a two-to-three hour work. Enticing as the project is in its current state, Shahnameh does feel brief, owing to the early stages of an experimental development process. But it’s exciting that BETC allows us the unique opportunity to witness their developmental journey as they continue presenting stages of the work and watch it unfold into its progressive forms over the coming months. With the atmosphere and engagement of this evening, it should be exhilarating to see the next steps of the work.

The Boston Experimental Theatre Company is scheduled to perform their next version of Shahnameh on October 11 and 12 at Touch Art Gallery, 281 Concord Ave, Cambridge, MA 02138. For more information, visit http://bostonexperimentaltheatre.com/.