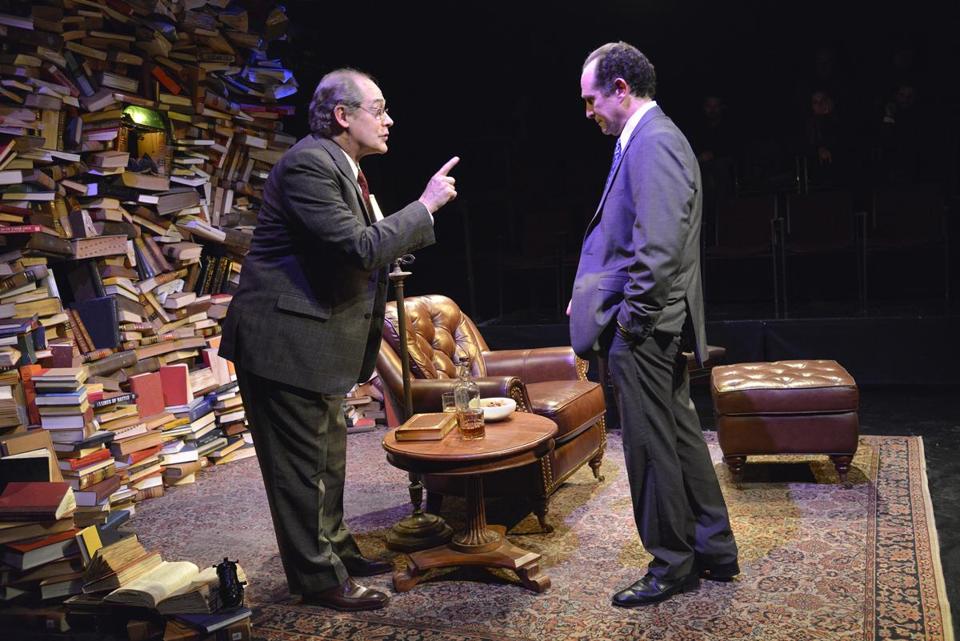 New Repertory Theatre presented a Special Encore Extension of their hit production of Imagining Madoff. I couldn’t imagine myself not seeing it for the first time, the second time around. Written by Deborah Margolin, the play explores the intensely intimate (but fictional) encounter between Ponzi-schemer Bernie Madoff and fictitious Jewish Solomon Galkin. The result is a wild ride of theatrical success in the visceral but highly intelligent discourse on difficult moral issues. In her Message, Director Elaine Vaan Hogue illuminates why one should “imagine” Madoff. In this play, she hopes that certain complex moral questions “possess the potential to thrust each of us into a deeper investigation of our own humanity,” with the possibility to liberate through what Margolin terms the “startling things within the human complement.” And these ambitions succeed brilliantly; I couldn’t imagine a better night at the theatre.

It’s impossible to go into this production without preconceived notions about this man and his work, and under Vaan Hogue’s highly capable and detailed direction, New Rep succeeds in enchanting and thrilling us by showing us the face of evil from the inside out. Leading the cast, Jeremiah Kissel brings a breathtaking and turbulent reality to his Bernard L. Madoff. He is at once defiant and oddly child-like in his portrayal of the self-absorbed and intelligent mogul and schemer. Kissel’s charm as Madoff is disturbing, even terrifying considering Madoff’s success in orchestrating his infamous and horrible Ponzi scheme. Vaan Hogue and Kissel humanize Madoff such that you let down your guard as an audience member, only to be reminded of the billions of people defrauded by his Übermensch philosophy. Joining him, Joel Colodner’s Solomon Galkin is more than a voice of reason and intellectual curiosity; he is Madoff’s comrade, and Colodner personifies a fictional friend who Madoff defrauds and swindles. To add insult to injury, Galkin is also a Holocaust survivor, a surprising twist that adds Old Testament nobility and modern interests such as baseball to the mix.

While some of the play comes across as too philosophical and religious, the heart of the matter is a beautiful and chilling conversation among Colodner’s Galkin, Kissel’s Madoff, and the audience. It’s hard not to feel like part of the action in the intimate theatre. The stage is littered with piles of books, ingeniously hung by Scenic Designer Jon Savage, conveying the intelligence of these two men, but also displaying Madoff’s lack of humanity—a man stuffed with book-knowledge but lacking the empathy to consider the ramifications of his actions. Or does he perhaps know the effect that he will have on others? Kissel’s Madoff is brash and confident, obsessed with power and comforted by money. Adrianne Krstansky’s Secretary gives Kissel’s Madoff some humanity, but she slowly reveals the truth of the monster hidden behind his arrogant comments. I wondered if Madoff’s secretary is really the best character to include in this intimate story; while her confessions during the indictment are heartfelt and beautiful, they also drag under filler exposition. With a mere 90 minutes of performance, every moment feels weighted with importance, and interruptions feel poignant, even when such dialogue or monologue feels strained.

New Rep’s Imagining Madoff is everything that I love about live theatre: intimate, important, intellectual discourse, brilliantly imagined by a talented troupe and orchestrated by a finely-tuned director. I applaud New Rep’s ambitious undertaking with this devilishly difficult play, and I am thankful for the encore performances which allowed me to catch the much-acclaimed production before it was gone forever. Despite closing months ago, the themes and staging linger with lasting messages and artistic brilliance.