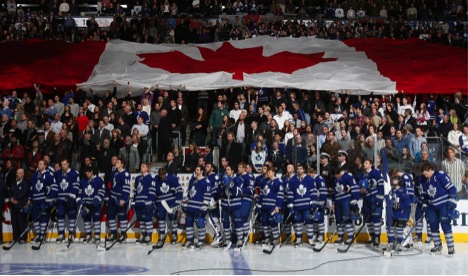 The Rest of the Tour:
The Winnipeg Jets
The Calgary Flames
The Ottawa Senators
The Edmonton Oilers

The Leafs
We’re back to Hockey in Leaf Land and plenty of skepticism still remain in the biggest hockey market in the world. Will Kadri stay consistent? Will Clarkson bounce back? Will Carlyle make it through the entire season as coach? How long before the Riemer/Bernier controversy begins? Although the biggest question of all… is this a playoff team?

Let’s start with the goalie controversy. Last season everybody was counting on a strong 1-2 punch in net. Johnathan Bernier ended up running away with the starting job a couple months into his first season as a starting goaltender in the National Hockey League and posted respectable numbers in the 55-games he played posting a 26-19-7 record with a .923 save percentage along with a 2.68 GAA, clearly trumping the poor season of James Reimer who went 12-16-1 with a .329 GAA after bringing the Maple Leafs minutes away from beating the Boston Bruins in the 2013 playoffs. However, once Bernier solidified the starting job Reimer plummeted and his “trade stock” drastically fell in most circles around the league.

Reimer is still a young quality goaltender who has proven he can win in this league. Furthermore, the Leafs are banking on him bouncing back this year so that if they decide to move him, he holds more value. The only problem is that behind Reimer, there is no depth in the organization at his position. If they were to move Reimer the next man in the rotation would be Garrett Sparks, (barring a signing/trade) a 21-year-old goaltender who spent the season with the Marlies last season posting an 11-6 record in just 21-games and has not played a single minute in the NHL. Goaltending depth is sub-par and judging Bernier and Reimer’s injury issues, they should keep both tenders and add another veteran with NHL experience just in case an injury or two occur. Assuming Timmy Thomas, Marty Brodeur, Thomas Vokoun or Nikolai Khabiboulin wouldn’t be willing to play in the AHL until and injury occurs, the Leafs best bet would be the trade rout- Possibly call Marc Bergivan and kick the tires on Joey Macdonald given their incredible goalie depth?

Next up let’s talk about the blue line. The past few seasons there has been a lot of competition in Leafs camp for the final two or three defensive spots on the roster, most being older castaways i.e. Paul Ranger. Although this season the top-six defensive pairings seems almost solidified prior to training camp with holdovers Dion Phaneuf, Cody Franson, Morgan Reilly, and Jake Gardiner, along with free agent signing Stephane Robidas, and former Leaf, Roman Polak, who was traded from St Louis. Furthermore, there will be a competition for that final seventh defenseman spot. However, the remainder of defencemen among the organization lack NHL experience. Other than Korbinian Holzer, no other defenseman has played a game in the NHL. Thus, GM Nonis felt singing veteran defenseman Henrik Tallinder to a professional tryout contract hoping for him to emerge as the veteran defenseman they need to battle for that seventh spot. Among others that will be competing for that last depth position would be their 2011 first round draft pick, Stuart Percy, Petter Granburg, and Andrew Macwilliam, yet that would be a controversial decision at that would most likely hinder their development. Using them as an injury call up would best serve these younger defensemen and the future of this organizations defensive depth.

As for the offensive side of the puck depth is once again a problem, but a good problem. With an established top-six group led by top scorer Phil Kessel, the Maple Leafs made it apparent that they wanted a much deeper bottom-six and they achieved that through free agency by singing an abundance of bottom six forwards: Mike Santorelli, David Booth, Daniel Winnik, Leo Komerov, Petri Kontiola, Troy Bodie, and made a trade to re-acquire Matt Frattin from Columbus. That is eight new players vying for five or six roster spots. Nonis has exaggerated his reasoning of all these depth signing is to not only be a deeper team, but to increase compete levels within the organization and have legitimate position battles through training camp and all season long. However, the names mentioned above are just the new faces arriving in town. Holdovers, Colton Orr, Brandon Kozun, Carter Ashton, Spencer Abbott and Peter Holland, Tyler Biggs and Trevor Smith are also looking to crack the Leafs roster. Having fifteen+ players compete for six jobs is certainly going to bring the best out in some players and create competition within the organization.

Certainly William Nylander could be put into conversation as well but unless he wins a top-six role, he would better develop with a year in the minors to get a feel for the pro game. Currently, barring injuries or trades, the top-six looks full with Tyler Bozak centering the top line with James VanRiemsdiek and Kessel on the wings. Kessel excelled last season burying 37-goals and scored 80-points and didn’t miss a single game. Although recent reports talk about Kessel having an issue with coaching, he is poised for another fine season as he is the face of the biggest hockey market in the world. As for the second line, Leafs nation is hoping Nazem Kadri can be consistent all season long and become a quality top-two center in the NHL. With Joffrey Lupul on his wing, he should have a tough time finding a player to give the puck to who can score. David Clarkson rounds out the top-six and is slated to play alongside Kadri and Lupul. After singing a seven-year $36-Million contract Clarkson had his worst season since he broke into the league putting up an awful campaign which consisted of just 5-goals through 60-games. Now, Clarkson has the burden of that contract raining over his head and being awarded a contract as hefty as his, he is expected to produce. Front office and Head Coach Randy Carlyle will give Clarkson every opportunity to prove he is worth the contract, but if he doesn’t play well in training camp, Nylander will be given a shot to prove he can be effective in a top-six role while relegating Clarkson to the third-line.

Nonis and the Maple Leafs front office clearly have some big decisions to be made before final roster cuts occur, but looking at this team in comparisons to last year, it certainly looks more competitive and deeper up front, but could use a veteran defenseman or two as insurance, and most definitely use another veteran backup goalie in case of an injury. A possible scenario would be to offload one of their bubble forwards to a team lacking depth for a veteran goaltender or defenseman.

Next team up on the Canadian Tour: Winnipeg Jets