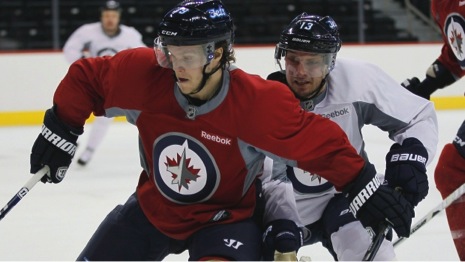 The Rest of the Tour:
The Toronto Maple Leafs
The Calgary Flames
The Ottawa Senators

The Jets
The next stop on our Canadian tour is in Winnipeg. The Winnipeg Jets are the newest edition to the National Hockey league since moving from Atlanta just four years ago. The Jets have not endured much success since the move, but are optimistic going forward. Can Mark Schiefele take his game to the next level and be a top center in the NHL? Will the Evander Kane saga end? Many questions burden this young franchise as they head into the 2014-2015 season, but one question everyone is asking… Will they finally make the playoffs?

Let’s start with the goaltending situation. Ondrej Pavelec was supposed to be their next star goaltender when Atlanta traded away Kari Lehtonen to the Dallas Stars in February of 2010. Since the trade Pavelec has not lived up to his full potential thus far with just a career 2.96 GAA and a 9.06 save percentage in his 288 career games for the Jets/Thrashers organization. Not overly horrible numbers, but not top tier statistics, and not statistics that win many games. Last season Pavelec started just 58-games due to his lackluster performance in goal. He boasted a 3.01 GAA and a .901 save percentage last season for the Jets with a record of 22-26-7, all of which are worse than his career numbers. Eventually the Jets gave back-up goalie Al Montaya a shot in net, and he ended with a 2.30 GAA and a .920 save% along with a winning record of 13-8-3 on a team that was not offensively gifted. However, the Jets were unable to reach a deal with the UFA this season and he took off and signed a two-year deal with Florida. That leaves the door wide open for Michael Hutchison to claim his spot on the team. Hutchison played in just three-games last year but posted outstanding statistics with a 1.64 GAA and a .943 save percentage with a 2-1 winning record. Needless to say, he looks to be the favourite to back-up Pavelec, and possibly replace him, unless Pavelec can finally turn the corner and start winning hockey games.

The Jets have spent a few high draft picks on the back-end as a way to solidify a young and strong defensive core. Winnipeg is counting on Zach Bogosian to be the leader of this defence; when healthy he’s a great defenceman, but that has been an issue so far in his young and promising NHL career. He was the 3rd overall selection in the 2008 NHL entry draft and made the team right out of camp. However, as previously stated health has been a major concern for Bogosian as he has yet to play a full 82-game season. This past year he was limited to just 55-gamesand was not entirely effective. He too, along with Pavelec, needs to turn the corner and play up to his full potential. Another defenseman the Jets organization spent a high draft pick on was Jacob Trouba in the 2012 entry draft selecting him 9th overall. He got his first taste of the majors last season compiling a 29-point rookie season in just 65-games. Trouba will be expected to grow this season and become one of the young leaders of this Jets franchise. A player who will be at camp fighting for one of the last spots on defense is 2013 first-round pick, Josh Morrissey. Morrissey spent last season in the WHL where he compiled a 73-point campaign while tallying a staggering 11 power-play goals for the Prince Albert Raiders, and should be a viable contender and compete for a spot on the Jets Roster. Among other notable defenceman who should be competing with Morrissey for a job with the Jets are Grant Clitsome, Adam Pardy, Keaton Ellerby, and Paul Postma. However, an extra spot has been freed up as big bad Dustin Byfuglien has been switch back to forward and should play a top-six role for the Jets. For a team with question marks in goal, and a team who lacks the scoring touch, they will be relying on this young defensive core to lead the way this season.

It would be rather difficult to talk about the Jets without mentioning Evander Kane. Kane has a nose for the net and has tremendous scoring touch; enough for the Thrashes to take him 4th overall in the 2009 draft at least. However, ever since last season there has been rumors that Kane wants out of Winnipeg and has become a cancer in the locker room. But are the Jets willing to give up such a highly talented offensive weapon? Kane came into the league in his draft year and put up decent numbers for an 18-year-old with 14 goals and 12 assists in just 66 games. He set career highs in 2011 with his first and only 30-goal campaign. Last year though he managed to only score 19 times as he struggled mightily to find the back of the net. If the Thrashers have any hope this year, this kid better break out. Although Kane is not the only young gun forward the Jets will need to rely on this year to be successful, Mark Scheifele will need to continue to develop into an offensive threat. Scheifele was the first pick of the Winnipeg Jets franchise and they’re banking on him to be a leader on this team and the next face of their franchise. Scheifele was awarded with a seven game rookie showcase in 2011 and a four game showcase in 2012 before finally sticking with the team last season. SCHEIFELE played in 66-games and managed to score 34-points. He held his own last season against some of the league’s top shut down guys last yeah, but with a year under his belt the Jets organization is going to lean on Scheifele to break out and have an impactful season.

As for the top line of the Jets it’s slated to have Scheifele in middle, and Kane with Wheeler on the Wings. Wheeler has been the teams’ best offensive weapon the past few seasons scoring 69-points in the full 82-game schedule last year. 41-points in a short 48-game lockout year, and 61-points in his first year as a Jet. The second line looks to have captain Andrew Ladd centred by Bryan Little, along with big bad Byfuglien as he returns to his natural forward position. Byfuglien is a mammoth of a man standing at 6’5 260-pounds, and he uses that entire frame to bully opponents off the puck. Byfuglien will be returning to his natural forward position he developed as in the Chicago organization. Byfuglien was traded to the Thrashers in their final year in Atlanta and was instantly switched to a defenseman. The transition worked out fairly well seeing as he recorded 20-goals in his first season on the blue-line and has followed it up with decent years to follow having his best season last year topping 20-goals once again and scoring 56-points from the backend.

The Jets didn’t necessarily make any moves major moves this offseason but they added depth by signing Matthieu Perreault to a three-year $9 million contract in hopes he can solidify their third line center position left void of the KHL bound Alexander Burmistrov. Perreault played for the Ducks last season, and contributed an impressive 43-points in 66-games as a depth centerman, and that’s exactly what the Jets are hoping he can bring to them this season. TJ Galiardi was another wise depth signing by GM Kevin Cheveldayoff as the forward depth of the Jets, unlike the defensive depth, is rather thin. Another guys expected to fight for a roster spot is first-round pick Nikalaj Ehlers. Ehlers was considered one of the best offensive minded players in the draft and the Jets expect for him to compete for a spot in their top-six. Ehlers had 49-goals last season playing in the QMJHL and will look to show off his talents to his new team in camp and boost out a projected top-nine forward and take earn their spot on the roster. Others expected to compete for a job on the Roster include holdovers Michael Frolik, Erik Tangradi, Anthony Peluso, Chris Thorburn, and Matt Halischuk.

There is a lot of controversy in Winnipeg, but if some of their young stars can make the leap from having potential to producing, then maybe Head Coach Paul Maurice might be able to get this team into the post season for the first time in their young franchise’ life.