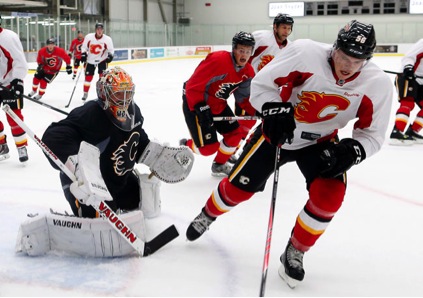 The Rest of the Tour:
The Toronto Maple Leafs
The Winnipeg Jets
The Ottawa Senators

The Flames
The next stop on our tour will be in Alberta. The Calgary flames exceeded expectations last season despite finishing 4th last in the standings. The Flames ended the year with a 35-40-7 record. That was 10-points more than the next worst team, Edmonton, who finished with 67-points. The Calgary flames have a new GM, Brad Treliving, and he went out this offseason and gave the organization a chance to win by making some depth signings and bringing in a goaltender who can allow the Flames to compete.

Goaltending was the biggest issue last season after the sudden retirement of Mikka Kipprusof. Kari Ramo, Joni Ortio, Reto Berra, and Joey Macdonald all stood between the pipes last season for the Flames- a fairly unstable bunch. Goaltending was the number one priority list for the Flames this off season. The Flames gave disgruntled goaltender Jonas Hiller a contract on July 1st to address the situation. The Flames are fairly confident they have two quality goaltenders that can play in the National Hockey League. Hiller has spent his entire seven-year career with the Ducks and has been their starter for the past five-seasons after winning the job from Ilya Bryzgalov, keep in mind that Bryzgalov was a quality goaltender earlier in his career up until the big money deal in Philadelphia. However, the Ducks decided to go in a different direction in net with the sudden emergence of both John Gibson, and Frederik Anderson, thus, Hiller became expendable and left for free agency where the Flames signed him to a two-year $9-million contract.

Last season Hiller posted respectable numbers in goal for the Ducks. In 50-games Hiller posted a 29-13-7 record along with 5 shutouts– these are the numbers the Flames organization are hoping to find this upcoming season. As for the back-up position it is up to Ramo to lose. Ramo had a pretty good season considering the team playing in front of him as he was able to find himself in the winning column more times than not posting a 17-15-4 record with a 2.65 GAA and a .911 save percentage– so he is more than capable of back-up duties in the NHL. However, Ortio will have an opportunity to fight for a spot on the roster but given he’s only 23-years old he would best serve starting in the AHL on a nightly basis rather than playing every five-games or so as a back-up to Hiller.

On the blue-line there won’t be much change from last season, essentially the Flames have replaced the minutes of Chris Butler for Deryk Engelland. The Flames signed Engelland to a lucrative three-year contract worth $8.75 million. A big pay increase from the league minimum he was making last season. Health was a big cause of the Flames’ back-end last season as they lost every defenseman, with the exception of Butler and Brodie, for an extended period of time last season. The Flames captain Mark Giordano’s season was hindered by a lower body injury that forced him out for 18-games. Despite missing a portion of the season Giordano still put up career highs scoring 14-goals and contributing 47-points from the back-end. If the Flame want to compete this year, they will be leaning heavily on the steady and consistent play of their captain. Dennis Wideman was another defender for the Flames who couldn’t stay healthy last season after signing him to contract that will pay him $26 million over the next five years (three remaining). Wideman was supposed to be bring leadership to the line-up, but was limited to just 46-games. He too will be leaned on by this young flames team to contribute from the blue-line.

TJ Brodie comes into his 2nd full season with the Flames and he was undisputedly their best defender last season. He missed just one game all season and was the only Flames defensemen to not have a negative +/- rating despite playing over 24-minutes on average every night. The Flames will be looking for him to make the leap this year and become a stud defenseman alongside Giordano and solidify a shutdown defensive pairing to scare opposing teams in the league. Kris Russell and Ladislav Smid should round out the defensive pairings for the Flames to start the season.

Scoring wasn’t something that came easy for the Flames in most games. Sean Monahan was a pleasant surprise being able to come out and play after being the 6th overall draft pick in last year’s NHL entry draft. Monahan scored 22-goals last season and contributed 34-points for the Flames playing just under 16-minutes a game. Monahan needs to avoid the sophomore slump if they plan to contend this year. Monahan’ 22-goals stands as the team lead from last season due to the departing of Mike Cammalleri who scored 26-goals for the Flames. The flames made it apparent that they wanted to be a deeper team and addressed that this offseason with a few free agent signings with Mason Raymond, Devin Setoguchi, and Brandon Bolig.

The Flames also have some young forwards in the system that are ready to compete for a roster spot also. Sven Baertschi has been the prospect that has been poised to break out for the past two seasons and hasn’t been able to make a clean transition to the NHL. Baertschi has was the Flames 13th overall selection in the 2011 draft and has played in 51-games over parts of the last three seasons. In just five-games in 2011-2012 Baertschi scored 3-goals and hype begin to increase for the young Flames prospect. But since then he has not been able to contribute to the Flames. Last season he scored just 2-goals in 26-games before being demoted back to the minors. If Baertschi can get his game figured out in the NHL, he can push for a roster spot this season.

Another player who may have one of the best chances at cracking the roster is “Johnny Hockey,” Mr. Johnny Gaudreau. Gaudreau scored his first NHL goal in his lone NHL game he played last season after signing with the Flames prior to an enigmatic season at Boston College in the NCAA league scoring 80-points in 40-games winning himself the prestigious Hobey Baker award distinguishing himself as the best player in the NCAA. The Flames organization are absolutely thrilled to have an offensive weapon like Gaudreau in the system and will be looking for him to compete for a spot on the roster this season and replace some of the offense lost in the Cammalleri departure. Max Reinhart, a 3rd round pick of the Flames in 2010 is also looking to solidify a spot on the Flames. He had a breakout year last season in the AHL improving from 21-points in 2012, to 63-points last year. Reinhart has seen limited NHL action but he has played 19-games of experienced, and hasn’t looked too out of place.

Possibly the biggest question mark plaguing the Flames during training camp will be whether or not Sam Bennett will be able to transition into the NHL this year, or will he have to spend another year in Kingston with his OHL team. Bennett was the 4th overall selection in the draft this past June, and was at one point in the conversation for 1st overall. However, after not registering a pull-up in the evaluation camp questions arose of him maybe not being strong enough to play in the NHL just yet; although, his hockey sense is impeccable and he has the number to prove it. Bennett scored 91-points with the Frontenac’s in just 58-games earning himself a spot on team Canada at the Ivan Hlinka tournament where he scored 3-goals in just five-games. There’s no doubt this kid has the skill to play with the big boys, but he will be watched heavily by the Flames front office to see if he can compete and stay on his feet and be effective in his own zone.

The Flames organization need a new face of their franchise and Monahan is poised to be just that. However, a 1-2 punch of Monahan-Bennett seems like a legitimate threat in the league– just not for a couple years. The Flames have pretty good depth all throughout their organization except in the goal scoring category and the Flames are going to be looking for a number of key players to step-up this season and fill the void left since the departure of Iginla and now Cammalleri; Raymond, Baertschi, and Gaudreau will be heavily looked at during pre-season to do just that.

*Bennett may get himself a 9-game tryout if he’s a bubble player and challenges Stajan or Colbourne, but unlikely due to depth at center position.