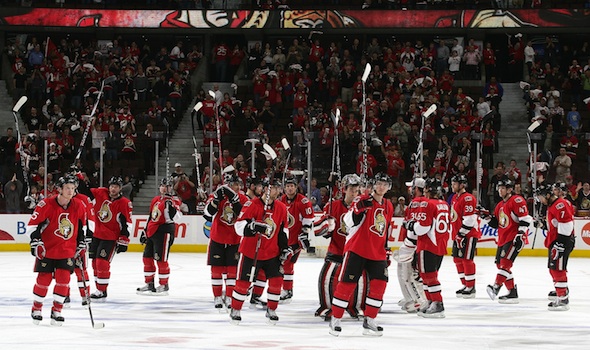 The Rest of the Tour:
The Toronto Maple Leafs
The Winnipeg Jets
The Calgary Flames

The Senators
Other than maybe Vancouver, there is no other team in Canada that has endured more than enough of their fair share of roster changes and different leadership roles than in Ottawa. Just one year remove from the devastating Daniel Alfredsson departure, they had to witness another captain leave their organization in Jason Spezza; although, Spezza was traded where-as Alfie left all on his own. As of now the Senators are left without a “C” on anybody’s jersey but will be looking for a few key players to step up this season and show they can lead this team into the post season. Aside from the leadership changes, the Senators organization are hoping for a youth movement to occur this season and have some of their draft picks turn the corner and make the NHL club.

Let’s focus on the goaltending tandem in the nation’s capital. Both Craig Anderson and Robin Lehner received contract extensions this offseason and are both capable of being the number one goalie in Ottawa, but Anderson will most likely play the majority of games unless Lehner can steal the job and emerge as the top goalie in Ottawa. Two seasons ago goaltending was a bright spot for the Sens in the lockout shortened season which forced the hand of GM Bryan Murray to trade away a goaltender and they ended up trading Ben Bishop to the Tampa Bay Lightning who turned in a stellar season for the Lightning this past year. Meanwhile, the goalie tandem in Ottawa did not turn out a great season which resulted in them missing the playoffs last season. On paper, Anderson’s 25-16-8 record looks a lot better than Lehner’s 12-15-6 record. However, Anderson still allowed a 3.00 GAA which was only slightly better than Lehner’s 3.06 GAA. Comparing those numbers it is highly noticeable that Anderson received much more offensive support from his team in the 56 starts he had. If the Senators want to get back into the post season Anderson and Lehner are going to have to play much better this season as they endure growing pains with a much younger and less experienced team.

The top defender that will try and make Anderson and Lehner’s life as easy as possible is Norris candidate Erik Karlsson. Karlsson was the 8th defenseman picked in the 2008 draft at 15th overall but has blossomed into one of the premier defensemen in the league. Karlsson has been the most consistent offensive defenseman since coming into the league in 2010 where his rookie campaign consisted of 26-points in just 60-games and has followed that up with 211-points in just 255-games. That is a staggering .82 points per game average over the course of the past four seasons and he is only 24-years-old and continues to grow as a leader on and off the ice for the Senators. Besides Karlsson they will be leaning heavily on the leadership from the most tenured Senator, Chris Phillips. After being taken 1st overall by the Sens in the 1996 draft Philips has enjoyed his entire 16-year career in Ottawa and is their number one shut down guy defensively, and once again will have to be a machine in his own end for the Sens to be successful.

When referring to a youth movement in Ottawa defense is a position where some younger players are ready to step up for the organization and become a full time NHL defenseman. Jared Cowen was the 9th-pick for the Senators in the 2009 draft– one year removed from drafting Karlsson – was once regarded as a top shut down defenseman but Cowen has not been able to stay healthy playing just 158-games over his first three years in the league and hasn’t distinguished himself as dominant in his own zone just yet, but he is now 23-years-old and should be able to play a lot of minutes for the Senators this season. Despite the poor season by the Sens last season Cowen was able to end the year with an even +/-; Only Cowen and Methot were the only regulars to accomplish that feat. Cody Ceci, Patrick Weircoch, and Erik Gryba, and Matt Boroweicki seem to be the other young defenders competing for a spot on the club’s final roster. Wiercoch, Gryba, and Ceci seem to be the early favourites to come out of camp due to their relatively strong play last season. Ceci, just 20-years-old, is a solid puck-moving defenseman– not that Ottawa doesn’t have a couple of those already– but at such a young age and a fairly deep offensive-defensive core, he may be best suited to start the season in the AHL with the affiliate team in Binghamton and get more minutes to develop into a more well-rounded player. However, ultimately he may be able to push Gryba for his spot in the top-six which would make Gryba the last defenseman on the roster.

This Senators team is going to have a much different look this year compared to last season with the departure of Jason Spezza and the acquisitions of Alex Chiasson, and David Legwand. The biggest question in the nation’s capital is whether or not Kyle Turris is ready to take on the job as the team’s top center. Once regarded as a franchise player Turris hasn’t quite lived up to that hype just yet, however, Turris put together the best season of his young career last season leading the team in goals with 26. The Sens organization is banking on Turris to grow on the season he had last season and ease the loss of Spezza. Bobby Ryan was acquired on July 1st 2013 via trade with the Anahiem Ducks which included the 10th overall pick (Nick Ritchie), Jacob Silfverberg, and Stephan Neosen. With a year of chemistry under his belt with Turris, the senators are praying that they become an offensive force this season, much like the Spezza/Alfresson tandem of a few years ago. Ryan scored 24-goals last season but is a four-time 40-goal scorer as a member of the Ducks and is hoping to get back into that type of goal bracket this season.

The man acquired in the Spezza trade, Alex Chiasson, just 23-years old, had a successful rookie campaign with the Stars last year scoring 35-points through 79-games. He will be looking forward to an expanded role in the Sens offence, most likely on the 2nd -line with free agent signee, David Legwand, and Milan Michalek, who look to bounce back this season after a poor season last year scoring just 17-goals after scoring 35-goals in the leagues last full 82-game season. Chiasson started his NHL career off with a bang scoring 6-goals in just a seven-game audition at the end of the lockout season, and then made Dallas’ roster and played the entire season. Chiasson does need to work a little bit of is defensive game in his own zone to be a considered a really good talent in this league, but he certainly has the offensive upside to have Ryan-like production with 20-25 goals in his first season with the Senators. Another young prospect looking to make an impact with the Sens this year is Mika Zibanejad. He scored 16-goals in 69-games last season as a 20-year old and will look to improve on those number this year as he will have every opportunity to make this club out of training camp. After a couple of solid seasons in Binghamton Mark Stone will be looking to push for a roster spot and with a fairly weak bottom six he be able to crack the roster. Last season Stone appeared in 19-games where he compiled 8-points in limited ice-time for Ottawa, however, Stone put up superb offensive production in the AHL scoring 41-points in just 37-games before being called up to play for the Sens. The youth movement in Ottawa could very well be in full effect as the Senators have a plethora of young talent that they’ve been developing that are ready to make the leap to the NHL.

The biggest issue Sens management will be enduring the next week is which prospect to send down, and which ones to give a roster spot to. There are a few jobs up for grabs if the youngsters can produce in camp and earn their spot. As long as this team can stay healthy and be more consistent than last season then the Ottawa Senators should be in playoff contention come April and should be battling a few teams for those final playoff wildcard spots.