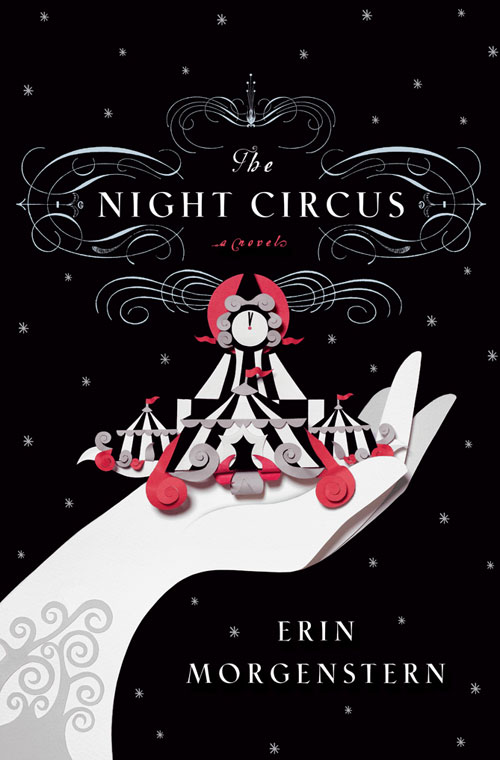 Sometimes, you want a little magic in your life.  Erin Morgenstern crafts a National Bestseller with her The Night Circus, chronicling a circus that arrives without warning.  Amidst the wonder of acrobatics, contortionist, tarot card readers, and kittens that jump through hoops, we follow two magicians raised almost since birth to compete in a mysterious and intricate competition.  The rules are unknown; the consequences dire; and the events are mystical.  Celia and Marco are about as different as you can get in their upbringing and personality, and we are treated to their thoughts at every turn.  More importantly, we are given the chance of discovery, at that Morgenstern excels, through a beautiful journey into this black-and-white striped circus.  I only wish that things weren’t so black and white for this novel’s story.

The novel opens with an introduction to Le Cirque des Rêves, The Circus of Dreams, made entirely of black and white.  Morgenstern uses the second person “you” to take us to the circus’s arrival.  This decision is a beautiful touch because it forces the reader to imagine himself not only into the story but at the wonder of the circus, a mysterious entity with much magic and little answers.  From here, we begin with a lengthy introduction to Prospero the Enchanter; such a long explanation of his talents and performances put this cantankerous and morally-suspect magician to the front of our thoughts.  However, Prospero (who is called Hector Bowen off-stage) is not one of our leading players, but simply serves to introduce us to our heroine, a talented and passionate young girl named Celia Bowen, his daughter and protégée.  I wanted Prospero to play a larger role in the novel.  Prospero/Hector is flawed and has a substantially undisclosed backstory that informs his present in a way that we never experience for Celia.  Nevertheless, we are stuck with Ms. Celia Bowen, and we move on, despite her severe lack of character flaws, making her an unrealistic and generally uninteresting heroine, especially if this novel is supposed to pass as Young Adult fiction.

The only person less interesting than Celia Bowen is her competitor, Marco.  Marco has a markedly more interesting childhood, having been raised in an orphanage until he is “adopted” (read: abducted) by the man in the grey suit—this mysterious man shouldn’t even serve as a real character because he has such little backstory or personality, and he serves as a virtually unknown antagonist.  Once Marco begins training with the man in the grey suit, he seems to lose any semblance of a personality and instead becomes obsessed with books and divorces from the real world.  Morgenstern does such a wonderful job of crafting a spellbinding and enchanting story that she misses the mark on character development, instead relying on her protagonists’ feats to accomplish her storytelling magic.

And what feats?  Well, these characters are both magicians, trained in different ways by their masters, to compete in a winner-take-all challenge for which Morgenstern provides few, if any, rules or constraints.  This approach is lazy because it allows her to maneuver with the novel with no expectations or ground rules with which her characters to comply (or from which to break and face the consequences).  The novels picks up once both characters start manipulating the circus, but the pace is sluggish, at best, and exhausting, at worst.  She struggles to develop a compelling love story for her characters, instead relying on the adolescent-instant-attraction trick.  Their interactions feel stifled, thereafter, compelled by only one emotion: lust (I mean this word in the fully emotional as well as carnal sense, though much physical romance seems to happen off the page, leaving this novel with a PG rating).  Celia benefits from this relationship because she is clueless about Marco’s true identity, and she doesn’t develop these all-consuming feelings until later in the novel; Marco is not so lucky.  For a story that relies on high stakes and this tumble-into-love, the consequences feel low, the story feels simple, and the pace feels, well, elongated.  Time is an important element for Morgenstern’s The Night Circus; both time of day and the year play predominant roles in the storytelling.  I was surprised, therefore, to feel like the story never stretched as long as it could have.  Celia and Marco complain about the never-ending challenge, but without clearly defined rules and escalating stakes, the challenge feels manageable and time feels like a magician’s hat: bottomless.

Late in the book, we meet a slightly more interesting character, Bailey.  What makes Bailey compelling is that he feels like one of us; he feels like a boy who stumbled upon the circus on page 1 (which has an awesome opening line: “The circus arrived without warning,” rivaling some other iconic openings).  However, Bailey never really goes anywhere; instead of acting of his own accord, he has action and decision thrust upon him by others, mainly Widget and Poppet, two of the more dynamic characters in the story.  Widget and Poppet, mystical twins born during the circus’s tour, are introduced and highlighted just enough to justify a sequel to The Night Circus—we know who they are, but we don’t really know anything particularly exciting that happens to them (compared with Marco and Celia who we know very little about because they’re dull, but everything “exciting” happens to them).  But finally, the most interesting character is Tsukiko.  I think this effect is entirely unintentional on Morgenstern’s part.  The contortionist is barely featured in the novel until the very end, but the doozy of a plot twist is enough to make you want the entire backstory on this deeply hidden character.  If only her story could bend and twist into the original narrative, perhaps we would understand the nature of this competition and its protagonists’ stories better.

Morgenstern tries too hard to make her story neat and proper.  In an effort to mimic the success of her magical predecessors (I’m looking at you, J.K. Rowling and J.R.R. Tolkien and C.S. Lewis), Morgenstern creates a black-and-white story with easy answers, quick resolution, and contrived conclusions.  The ribbons tying up the end of the novel and the accompanying preachy discussions make Morgenstern feel less like an illusionist, and more like a magician who reveals her tricks.  She shows her sleight-of-hand and tried my patience as I suffered through explanation after explanation for what the Circus means (to me, to the characters, to her, to the world).  The Boston Globe called the novel a “showstopper;” I only wanted to stop the show from continuing by the end.  For me, this book seemed stuck in black-and-white and never showed its true colors.*

* As an addendum: I kept thinking that this novel would make a particularly strong movie, given the novel’s wonder and magic; coincidentally, Wikipedia suggests that the film is being produced by David Heyday and Jeff Clifford, with Moira Buffini writing the screenplay.