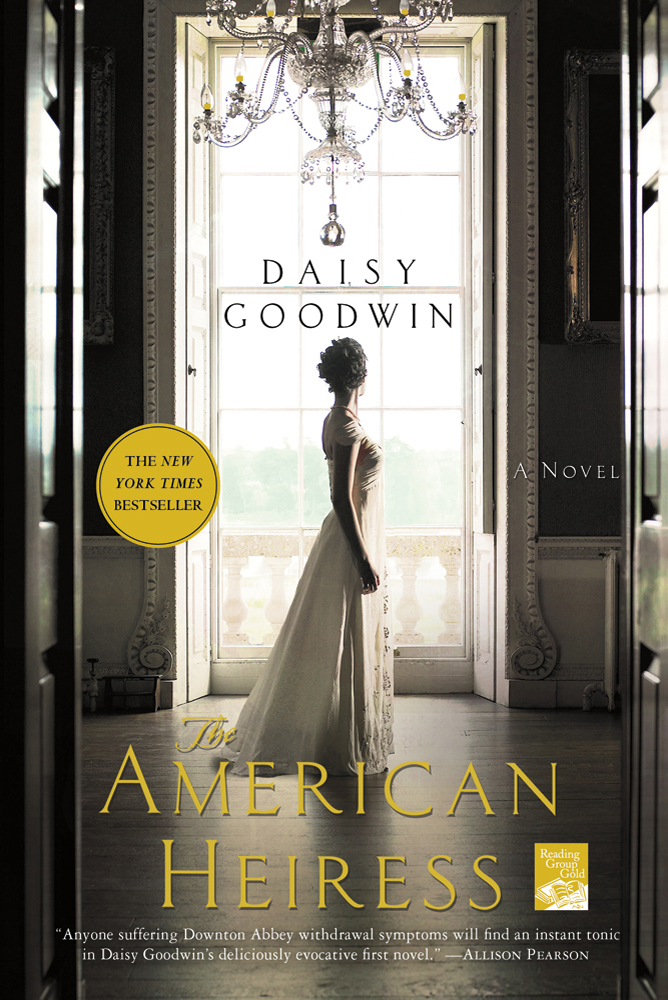 With a Cape Cod vacation ahead of me, I browsed the bookstore for an equally satisfying beach read.  My eyes caught the title: The American Heiress.  Well, this book had everything that I wanted; it had historical romance, loads of money and class, and a smart writer with the brains and spunk to infuse in her heroine.  While parts of Daisy Goodwin’s first novel disappointed me, I found the book to be overall a classy read for readers looking for a light-hearted novel of choosing one’s destiny and finding love and strength in the most unlikely of places.

The novel excels through Goodwin’s extensive knowledge and homage to some great literary predecessors: Austen, James, and [INSERT AUTHOR].  She takes an idea which is alluded to in other literary classics, the rich American girl marrying into the aristocracy for the one thing that money (normally) can’t buy: class.  And here is where things get interesting.  The novel focuses on the different classes, offering an upstairs/downstairs dramedy akin to Downton Abbey.  We begin in Newport, Rhode Island, the perfect beach town, but also a wonderful introduction to the turn-of-the-century American socialite scene.  Here, American heiress (oh, see the title!) Cora Cash is locked away in her home, ready to be sent off to England for extravagant marriage plans by her mother.  Cora has other plans, most of which involve marrying a well-off (though not excessively so) young man of good American heritage, Teddy Van Der Leyden, despite both of their parents’ disapproval about the match and Teddy’s fascination to go off to Europe to paint.  Tragedy strikes, and, before we know it, we’re thrust into the English stuffy society, a few months later with a guilt-ridden Cora.  This guilt feels forced but provides the necessary backdrop for many of Cora’s decisions while in England and searching for a husband at her mother’s bequest.

Barely acclimated to the English countryside, Cora finds herself bedridden (oh, the Jane Bennett parallels) in the estate of the handsome, charming, and oh so moody Duke Ivo (a kinder version of Mr. Darcy and Mr. Rochester).  The story should start to pick up here, but it never does.  Cora and Duke Ivo’s courtship is brief and uninspiring.  Goodwin focuses on creating a dramatic arc for after their speedy marriage, giving her readers hints for forthcoming emotional disaster.  Unlike Jane Eyre, and even Pride and Prejudice (to a lesser extent), which feature numerous moments of discovery and excitement, The American Heiress gives us glimpses of drama hidden behind a curtain, scenes of discovery that we are privy as omnipresent eavesdroppers but for which Cora does not know until too late.  The ending is equally unsatisfying and infuriating, perfect for a gaggle of female readers to debate in an equally annoying book club.  Unfortunately, the rest of the novel fails to excite in the same way; the historical context is too brief and fleeting, the romance and sex is lackluster and methodical, and the conflict brews behind the scenes like a well-behaved tea kettle.

The best part of the story is not this “dynamic” love story, but the clash of cultures and societies.  The novel could have been much more engaging and interesting to read, especially given Goodwin’s extensive knowledge and scholarship, if the novel included more of the way that the Americans (Cora and her mother, along with Teddy) tried to fit into, and ultimately changed, English culture and society.  The parallels between Downton Abbey’s the Dowager Countess (Maggie Smith) and Martha Levinson (Shirley Maclaine) as English nobility and American socialite and heiress, with Double Duchess Fanny and Mrs. Cash, made for an engaging read; their conflict felt like a real struggle of personalities and upbringing.  Their subtle (and often silent) contentions provided a wealth of information about the time period and its people, more so than the narration’s forward attempts to describe the scenes, which felt more like a #humblebrag by Goodwin.

Despite these criticisms, I enjoyed the novel for what it was: a tasteful beach read.  I could sit at a beach or pool in Provincetown and read the book with little shame, despite its more “feminine” title and subject matter.  Do I agree that the novel is worthy of the credit as a New York Times Bestseller? Not quite, but I do believe that Daisy Goodwin has the knowledge and writing style to produce award-winning novels worth our time and attention.  Right now, The American Heiress feels like a spoiled rich girl without much personality or verve behind the pretty exterior, relying on the wealth of her predecessors’ stories to create a readership and necessary literary allusions.