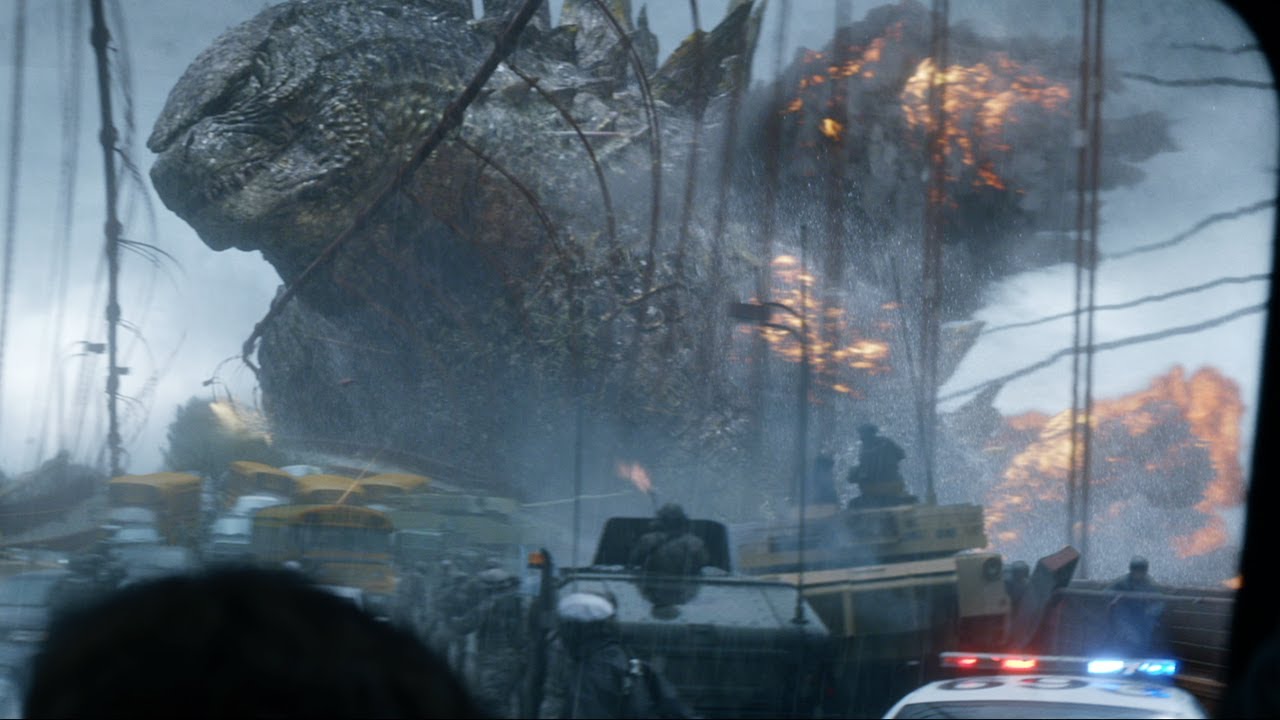 The Where’s Waldo edition of Godzilla

It’s inevitable that Godzilla will be compared to its former American incarnation. The 1998 Roland Emmerich film of the same name followed the same tropes established by his other disaster films, but paid little to no attention to what made the Japanese Godzilla films so entertaining and beloved in the first place. Now, 6 years later, American studios have managed to make a film that does not fail on quite so many levels. Whether or not it manages to stand up to the rubber-suited originals is a bit of a different story.

To start off, I feel it’s important to mention the past work of a no-name director who ended up in charge of a $160 million dollar summer blockbuster. Gareth Edwards has one previous full-length title to his name, but that film managed to create a lot of buzz, in spite of the little money it made. His indie film Monsters followed two very different people who discover each other while trekking through an infected zone that contains, well… Monsters. What made this slow, yet poignant, film so remarkable was that Edwards managed to make both his movie and his giant monsters look amazing on a $15,000 budget. So putting this man in charge of a giant monster movie made a lot of sense, to a certain extent.

What doesn’t naturally fit into a Godzilla film, butis very prominent in this current film and his movie Monsters, is the emphasis on people. Not to say that the Japanese films are perfect, but in general, the human characters often serve as plot exposition devices that lead up to the main spectacle of the films, the fight scenes. What this film does is bring the action down to a human level. The documentary-esque camerawork focuses our view right on this film’s real main character, unfortunately not Godzilla, but the character-less military man Ford Brody (Aaron Taylor-Johnson).

On the other hand, this point of view works very effectively in a few scenes. Most notably, the parachuting scene, which is accompanied by the score from the obelisk reveal in 2001: A Space Odyssey (SUBTLE!), which features soldiers descending along the seemingly infinite height of Godzilla, is absolutely chilling. Unfortunately, this only seems to work a handful of times and often instead ends up leaving the audience with an obstructed view of what they paid to see. Views that are far more reminiscent of previous films are often seen as cut-aways on TVs that the film seems far too amused with teasing the audience with.

Also, by centering the plot on one soldier, the movie creates two additional problems for itself. First, it has to constantly find ways to place our hero right next to the monsters and have him survive. This also happened in World War Z, and this movie, at times, comes off as being just as silly. Second, anyone who has ever watched a Godzilla film knows that the military is incredibly ineffective and that remains the case in this film. In fact, most of the major plot points in this movie revolve around the military screwing up to an almost laughable extent and then having to attempt to clean up their own mess.

What does work in this movie are the monsters. Godzilla, although he does arguably look better using practical effects, looks sweet and his full size and scale are viscerally felt in this film. Also, some of his more famous attacks make appearances and they were both surprising and awesome to see. The filmmakers also made the smart choice of not centering an entire movie on Godzilla’s origin story for the umpteenth time, and instead give him some monsters to fight. Godzilla’s rivals, unfortunately, are not as impressive-looking (possibly because every Hollywood invented monster lately ends up looking like Cloverfield for some reason) but it is still a relief to see a monster fight that manages to recapture the nostalgia of the classics to a certain extent (even if it is rendered in CG).

One problem in the monster category is which monster this movie chooses to focus on. Although it was good to see something for Godzilla to fight against, he actually takes a backseat, in regards to the narrative and screen time, to his rivals the MUTOS. This is not a major issue, seeing that Godzilla does still get to play the hero, but it’s a little misleading to see Godzilla alone in the title when he plays a more minor role than he has in previous works.

Aside from the film’s flaws, not mentioning the fact that Bryan Cranston was a major part of the marketing, yet plays only a minor part in the film, there are some gleaming points of light that show through. This new way of portraying what, events and narrative-wise, is essentially a stereotypical Godzilla movie, may not necessarily be my cup of tea, but it certainly does give a new spin to an old genre.

What this film does give me hope for is how these movies will be treated in the future. Now that the first film has had its chance to play coy and reveal glimpses of Godzilla and monsters throughout the first film, future movies should have the chance to get crazy right away. Rumours have started that the next movie may feature Mothra. Considering that Godzilla vs. Mothra may be the finest of the Godzilla films, I eagerly await the sequel and wish it good luck trying to fill those (rather large) shoes.