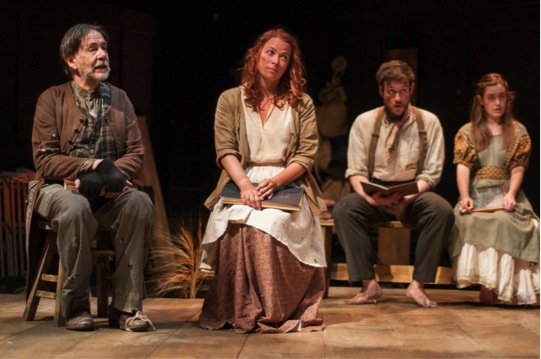 Brian Friel’s Translations is a tough code to crack. The 1980 three-act play by the Irish playwright is a piece about language, and while it has many other themes and ideas, it’s ultimately about how we communicate. However, Friel communicates in such heavy-handed tones that you can’t help feeling like you’re a child listening to your big brother’s class in linguistics, or, even worse, a college English class with an infusion of commentary on Irish oppression. Nothing feels subtle, nothing feels like it lacks purpose. Understanding Translations is annoying at best, and painful at worst. Thankfully, Bad Habit Productions assembles a top-notch cast and outstanding crew to salvage a dated script and an odd production choice for this emerging, talented company.

Set in the fictional village of Baile Beag (“Small Town”) in 1833, Translations follows the local hedge school, run by alcoholic schoolmaster Hugh (Victor Shopov) and his son, the lame aspiring teacher Manus (Gabriel Graetz) and their academic and rag-tag disciples, including Maire (Sarah Elizabeth Bedard), a pretty young woman; Sarah (Margaret Clark), a quiet young girl; Doyalty, a lively village dolt (Greg Maraio); Bridget (Gillian Mackay-Smith), a passionate woman; and Jimmy Jack (Kevin Fennessy), a funny local fool. The action begins with the appearance of British troops in the small town, and with them is Owen (Matthew Barrett), the younger son of Hugh and brother to Manus, who returns after six years in Dublin. Two other British soldiers join Owen—who mistakenly call him Roland—Captain Lancey (Bob Mussett), a pragmatic cartographer, and Lieutenant Yolland (Patrick Varner), a young and idealistic orthographer. Owen acts as a translator between the English and Irish.

As Captain Lancey and Lieutenant Yolland attempt to survey this Irish countryside, Yolland also falls in love with Maire, who was originally a sweetheart to Manus. This love triangle is further complicated by Yolland only speaking English and Maire only speaking Irish. Despite these complications, the two young lovers share a kiss, overseen by Sarah and reported to Manus. Manus is heartbroken and vows to attack Yolland, but, before he can do anything, Yolland goes missing overnight. Manus’s flight cements his guilt for the British and we have an international diplomacy issue on our hands. The ending is the most complicated and confusing part with much ambiguity about the play’s (and this town’s) resolution. I’ll leave you to sort through the puzzle pieces and draw your own conclusions.

The play focuses on miscommunication between two countries and their people during a time of turmoil, high stakes, and mistrust. The turbulent times turn to desperate measures, and, over the course of the play, we see the dissolution of language and the loss of a willingness to communicate. So, why does it make for such bad theatre? Perhaps the play drags in parts (the Irish love their three-act plays despite their waning popularity among theatre patrons). Perhaps the play is too intellectual and not emotional enough; the characters seem to talk in themes and metaphors rather than taking concrete action, often commenting on some of the play’s major actions in overt tones. Perhaps I’m just sick of Irish theatre and I failed to see its relevancy in twenty-first century Boston. Director M. Bevin O’Gara is extremely talented, evident in the way she creates a village with her cast through their interactions and stories. She keeps the play moving in most places, and she knows when to slow down the action to reinforce certain moments for excellent effect. However, I was missing Director’s Notes. I desperately wanted to know why this play, why now, and what I was supposed to understand from it. In a word, I wanted a Rosetta Stone for this play’s action.

But the play’s action is mostly performed with talent, albeit with some minor casting issues. For starters, it was hard to believe that Barrett’s Owen and Graetz’s Manus were even close to being brothers; they bore no resemblance and they looked solidly 20 years apart, even with facial hair. Barrett’s accent irritated, but, underneath the Irish accent fumbles, he is a talented actor with much potential in other works. Graetz’s Manus grew on me but he lacked any visible chemistry with Bedard’s Maire, making that love triangle a mere fiction. In other roles, these actors would speak volumes, but, here, they seemed to speak another language than their characters.

Bedard’s Maire was a fiery woman with almost hysterical passion underneath that gorgeous auburn hair; she had just the right amount of purposeful energy to propel the action forward in the sluggish scenes. However, Bedard really shone with Varner’s Lieutenant Yolland, creating an electric final scene of Act I that seemed to light up the dim stage. Their interactions where both hilarious, touching, and heartbreaking, with the ability to alternate between all three emotions in a single beat. Varner is an actor to watch in the future, displaying much charm in the earnest young solider. Equally earnest was Clark’s Sarah; this role could easily be campy and forced, but Clark manages restraint and finds the fear and hesitation in the young woman’s inability to communicate. Clark’s simple smile and silent interactions perfectly grounded Sarah’s emotions and thoughts with the other villagers.

Shopov’s Hugh is a man well beyond his years, but he rises to the challenge with a scholarly and aloof tone, and affected gait. Mussett’s Captain Lancey is just the right amount of pragmatism and no-nonsense, a wonderful departure from his prior comedic roles. Fennessy’s Jimmy Jack performed some of my favorite moments, funny and light with sincerity and truth in each line and interaction. Mackay-Smith’s Bridget and Maraio’s Doyalty bring life to the villagers with their thankless roles, infusing more character and personality than expected in the glorified ensemble roles, a testament to their acting ability. Hopefully, these actors will have future opportunity to showcase their full acting breadth in larger roles in the next productions (look for Maraio in Necessary Monsters with SpeakEasy Stage in December!).

P.J. Strachman’s lighting design is truly a masterpiece in color, variation, and mood. Whether a bright wash of the stage reminiscent of the bright Irish sunshine, or a moonlit field with brush and a lingering and shrinking moon, Strachman creates a stunning picture for the stage. Megan Kinneen’s scenic design is also strong, gritty with a dirt floor and clean slats of wood to create the off-kilter hedge schoolhouse. O’Gara also makes excellent use of the grid above the stage for some key scenes, including the ending. Nina Zendejas’s dialect coaching is also particularly strong, especially with the consistency among most of the characters.

Translations is the kind of play that I want to read at home—a closet drama that I want to dissect and write a scholarly paper on, about one of the character’s roles and its archetypal relevance in Irish literature and culture. I wish that I knew why Bad Habit Productions, a talented and clever theatre company, chose this play to start their Eighth Season: Identity and Discovery. While this play fits the season’s theme, the play lacks some translatable relevancy to today’s Boston community, leaving me scratching my head.