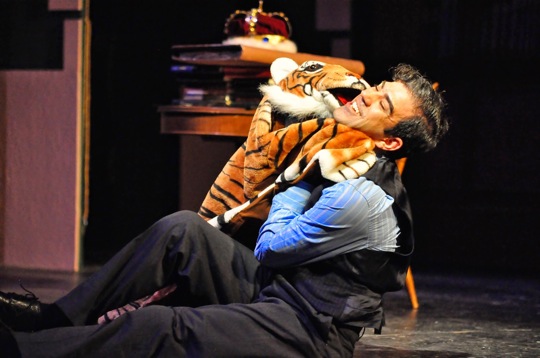 Me and My Girl at Reagle Music Theatre of Greater Boston in Waltham is a whimsical look at the by-gone days of lords and ladies, titles and toddies, coats of arms and family crests. Underneath the silliness of the plot, Reagle Music Theatre’s impressive cast finds heart in loyalty, love, and lots of laughter. While the script drags, the leading actors and energetic ensemble keep the show moving at the perfect pace, delighting audiences of all ages for a fun night at the theatre.

Billed as a show akin to the popular TV drama Downton Abbey, Me and My Girl is much more (and less) than its dramatic counterpart. Set in the 1930s (at least a decade after Downton Abbey), in Hampshire, England, the Hareford Family receives news from their Family Solicitor, Herbert Parchester (delightfully played by Chris Charron) that he has found the long-lost heir to the Hareford fortune and title. The Honorable Gerald Bolingbroke (charmingly acted by Devon Stone) is stunned that he may not inherit a sizeable fortune to repay his debts, and his sweetheart, Lady Jacqueline Carstone (lustfully played by Shonna Cirone), threatens that she must think of her own financial well-being as a woman and future wife.

However, with the rest of the family assembled, Bill Snibson (remarkably performed by quadruple-threat Joshua Holden) arrives from Lambeth in London, and he is nothing like what is expected by the Hareford Estate’s executors, the stuffy Maria, Duchess of Dene (icily played by Carole Healey), and Sir John Tremayne (stiffly portrayed by Rishi Basu). Even worse, Bill brought his girl, Sally (gratingly played by Jamie Buxton), who is the Eliza Doolittle of this fairy-tale musical. Can Bill convince his newly-found family that he is noble of birth and character, worthy to inherit the Hareford fortune? Will Sally rise to the lofty standards of the pretentious Maria? And will Gerald and Jacqui, and Bill and Sally find love and each other before it is too late?

Reagle Music Theatre finds the perfect mix of charm and skill to make this rarely-performed gem of a musical shine as bright as the Hareford jewels. The performance starts on an awkward note because of the automated introduction; while the staff and administrators’ time is valuable, few things can replace a warm introduction to the theatre, the production, and the afternoon or evening’s performance by a live and glowing face. That criticism aside, Me and My Girl bursts at its seams in its charming and energetic opening number, which perfectly sets the stage for the performance’s light-hearted gaiety. The choreography and movement by Director and Choreographer Cynthia Thole (featuring a recreation of the original choreography by one of the original Broadway cast members) is simply a delight to watch onstage. The ensemble members move effortlessly amongst each other, turning with grace, kicking with style, and beaming with joy. With a flourish, I fell in love.

Few performances have matched the grace, the charm, and the excellence of Joshua Holden’s Bill Snibson. Me and My Girl seems to be stuck in the high school musical theatre category, but Reagle Music Theatre manages to find some outstanding leading actors, expertly lead by Holden, to transcend any preconceived notions of mediocrity in the musical’s history. Holden uses his entire physicality to become the foppish cockney man, showing that he is incapable of propriety, as his character, and worthy of our respect, as an actor. His shining moments are the title song, “Me and My Girl,” and the “Hold My Hand” (featuring outstanding choreography and excellent execution by the select ensemble of dancers). He glides across the stage effortlessly when he dances, but he also succeeds in the many scenes of dialogue without a hint of song. Holden’s impressive use of puppetry, especially a hilarious bit with a tiger rug, proves that Holden is a quadruple threat: song, dance, acting, and puppetry. Described as a “Modern Day Mr. Rogers with hipster appeal,” Holden is one performer that I want in my neighborhood on a daily basis, cardigan or not.

Fortunately, Holden also has a strong supporting ensemble; while it is Bill’s show, some of the outstanding supporting cast members show that more than one hero exists onstage. Early in the show, Devon Stone’s Gerald and Shonna Cirone’s Lady Jacqui stole my heart in their “Thinking of No One But Me.” This performance is the best that I’ve seen from Cirone, who seems at home in the sexual restraint of the Edwardian musical comedy; her strutting hips, her pouty lips, and her sultry voice make her a sight for sore eyes and the kind of performer that you pay to see again and again for another thrill. Stone matches her with his over-the-top charm, complete with pratfalls and gapping mouth, which leave you aching at the sides and longing for more of his jovial smile and snarky one-liners.

Not all the musical is as consistent as these leading performers. The musical suffers from a poor Act II book, which scrapes by with weak reprises, awkward side-plots, and lengthy scenes of dialogue. One of these problems is partly due to the weak leading lady. Jamie Buxton brings little appeal to her Sally Smith, a character with whom the audience should adore despite her Eliza Doolittle roots. To have an actress who fails to bring few likeable qualities to Sally leaves the audience members scratching their heads in Act I (wondering why Bill insists on sticking by the silly Sally), and positively annoyed in Act II (because the story has been stretched to its breaking point, and you prefer Bill find a snobby aristocratic girl instead because at least it’ll add comedy to his dull life). Holden tries to find the cute tender moments with Buxton but she continued to smash through them with her bold and hammy choices, brash mannerisms, and obnoxious accent. Buxton has a beautiful singing voice which fails to reconcile with Sally’s humble roots; suspending disbelief only goes so far with pure vowels and clear tone switching back to a rough-and-tumble cockney way). A better leading lady could have saved Act II, though Holden continues to drive the production forward with his effortless charm.

The musical has its additional silly moments, some of which are exasperated by the direction and some of which are saved by the outstanding ensemble. Me and My Girl has a ridiculous song about the family solicitor, cleverly titled, “The Family Solicitor,” which thankfully gets repeated for gags rather than an actual reprise. “The Lambeth Walk” is an iconic song from the show, and features some excellent dancing, but the choreographer or director decided that they should break the fourth wall by forcing the dancers into the aisles of the audience; my groans did not deter the actors from smiling 60-watt smiles. The song also closes Act I on a very conclusive and happy note; I felt no reason to return for Act II’s story because Act I concluded so concisely. It didn’t help that Act II opened on a similarly silly note with “The Sun Has Got His Hat On” (I applaud the actors for singing these overly sentimental and quirky lyrics with a straight face).

So where does that leave us? Well, Richard E. Schreiber designs one of the more impressive sets of the season, switching from a large English hall complete with staircases, to the inside of the downstairs kitchen, to the streets of Lambeth, with ease and functionality. David Wilson’s lighting design is simple but effective, and Kansas City Costumes continues to flatteringly dress the actors (especially the many ensemble members’ multiple roles). Dan Rodriguez’s musical direction is crisp and bright as the Mayfair day, though his talents were underutilized in this musical. Thole manages to keep the action moving at the perfect pace, not allowing us to dwell too much on Act II’s faults, though she can’t speed through Buxton’s blunders as Sally. Overall, it is Holden, Stone, and Cirone, along with the many outstanding ensemble members (many of whom are young local talent), who save the show and make it a worthwhile gem to adore and treasure.