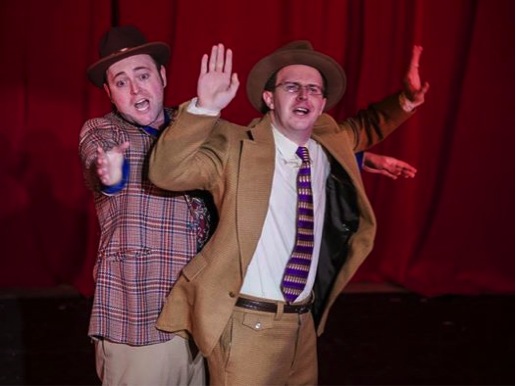 Brushing Up My Shakespeare with The Longwood Players

Kiss Me, Kate is a tough piece. It requires actors not only to pull off Shakespearean text, but also to dance with expert skill and stretch their range with Cole Porter’s operatic score. It’s not beginner’s musical theatre. Therefore, The Longwood Players’ choice to present this classic is a bold choice. While Director Anna Waldron made some equally bold (and mostly effective choices), the cast did not have the chops to carry the show beyond mediocre community theatre.

Waldron makes the interesting choice to call attention (at least in the Director’s Note) to the musical’s “love letter to the theatre.” An astute observation and an apt analysis of one of Cole Porter’s best shows; however, it fails in execution. Waldron is a smart director who kept the scenes moving at a steady pace, seamlessly transitioning from onstage drama to backstage dilemmas. A large amount of credit is due to Waldron and Technical Director (Sets) Kevin Deane Parker; recognizing the inherent difficulty of switching between onstage and offstage, they minimized the adjustments. The lighting design by Samantha Ledoyt was predictable community theatre, limited by resources and expertise. The orchestra, however, led by Music Director Karin Denison and Orchestra Manager Jason Luciana, assisted by Assistant Music Director and Rehearsal/Show Pianist Bethany Aiken, was notably a notch above other similar productions in the area. The orchestra resembled and performed the crooning style of a 1940s big band, effectively showcasing their talents while allowing the focus to remain on the singing ensemble.

And the singing ensemble surprisingly had its work cut out for them. Kiss Me, Kate centers on the rising production of a musical version of Taming of the Shrew (a clever device to allow the characters to break out into appropriate song while onstage and give them the dramatic flair to burst into song backstage, too). Miss Lilli Vanessi (played with some skill by Katherine Fuller) stars as Taming of the Shrew’s Kate, Kate the curst, the shrew of the Shakespeare’s play’s title. Lilli longs to leave the theatre because she has recently married the successful Harrison Howell (a too-brief cameo by Anthony Mullin), after a failed relationship with leading man, Fred (played with surprising mastery by Tom Frates), who coincidentally plays Petruchio, the man who must tame and marry Lilli’s shrewish Kate.

When Bill (C.J. David), another lead in the play-within-a-play, forges Fred’s name in order to gamble, two gangsters, Man #1 (Andy Lebrun) and Man #2 (James Aitchison) arrive to make sure that Fred pays their boss, much to the admiring Lois Lane’s (show-stealing Lea Madda) dismay. When Lilli has had enough of Fred’s womanizing ways, she threatens to walk off the show, in the middle of a performance, and the two gangsters are forced into the show to make sure that the “The Show Must Go On” (so that Fred has the ticket sales to pay their boss). All the way, Cole Porter’s music soars through the rafters with some of his best music and most iconic love songs, which remind us all of falling in love again, along with Fred and Lilli.

The show is surprisingly well-written, despite Cole Porter’s silly attempts to include hit songs around a whacky plot (see Anything Goes for a classic example), much thanks to Bella and Samuel Spewack’s book. The problem comes when a community theatre must tackle some of Porter’s most challenging music. How hard could it be? It’s not Sondheim! Again and again, Lilli and Fred must range from alto to coloratura, and bass to belting tenor, respectively, often in the same song. So? There are plenty of other musicals that require their leads to have outstanding singing talent. Okay, but how many of them also require their leads to perform Shakespeare onstage, in a show that revolves around mounting a successful Broadway production of a Shakespeare musical comedy? I’ll leave you to rack your brain for some examples while we continue with how this production failed to tame its Shrew.

Fuller is just not the leading lady to play Lilli; she shouts and yells her way through the majority of the dialogue, failing to capture the warmth and sensitivity of the aging leading lady. Perhaps Fuller has too much fire-and-brimstone youth in her, which fails to give the proper sentimentality to the lost love of her life. Surprisingly, Frates picks up many abandoned pieces and delivers them in spades—surprisingly because he is much older than anticipated for Fred, especially as a peer and contemporary (and love interest) for Lilli (and Fuller). However, perhaps Frates’ age and experience adds the necessary gravity to the role, including the singing and acting chops, which Fuller fails to grasp at times. Their chemistry also lacks the verve to survive this long musical comedy. Instead of singing to each other, the actors often feel like they’re singing over the other’s shoulder or even across the theatre to the balcony seats.

Equally awkward is the relationship between Madda’s Lois and David’s Bill. While the show does not rise and fall on their interactions, David’s Bill (Lucentio in Taming of the Shrew) felt like he was a foppish lover for Madda’s Lois (Bianca in Shakespeare’s original), and his “I Sing of Love” does little to help his manliness or worthiness of Lois’s love. Madda, however, steals the show with a glance and pout; she is a triple threat onstage (though the longer that she performs as Lois, the more she feels like a one-trick pony). Her numbers “Why Can’t You Behave” and “Always True to You (In My Fashion)” bring down the house. Waldron, however, makes the directorial blunder of taking David’s Bill offstage during the middle of the latter song, leaving Madda to hold the stage, something that she is more than capable of handling, but which makes little dramatic sense in the story’s arc. Leaving David onstage allows Madda someone to instruct, persuade, and console with her song.

Waldron is a capable musical theatre stage director, but she always feels like she lets go of too much control or initiative when actors start to sing. She makes the novice mistake of not treating the songs’ lyrics like dialogue which further the plot along; while Cole Porter wrote some silly songs for this particular musical, they propel the story forward better than other songs in similar musicals of its time. Not treating each song as an opportunity for growth and change for the characters deprives the actors, the story, and the audience for a better experience. Now, I must prove myself wrong and a windbag: Man #1 and Man #2, affectionately termed The Gangsters, excellently perform “Brush Up Your Shakespeare,” which left this Shakespeare fanatic rolling the aisles with laughter. Lebrun and Aitchison do their English homework, thanks to Dramaturg Lydia Anderson (kudos to The Longwood Players and Waldron for including a dramaturg), and their result is an A+. These two performers almost seem to cheat because they steal the show so effortlessly in each of their scenes. These two men were worth the ticket price, and more, and I hope to see more of them in the future.

Kiss Me, Kate was an ambitious choice for the Cambridge community theatre group. While their cast boasts some impressive resumes and some of their leads give some noteworthy performances, ultimately, the show rests on the relationship (and talents) of Lilli and Fred. Fuller and Frates attempt these difficult roles, but too many factors distract from their ultimate success, leaving the musical as an unfulfilled question: “Kiss Me, Kate?”