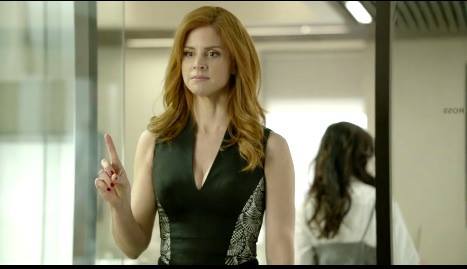 Remember the song “Why Can’t We Be friends?” I feel as though the characters on Suits should give it a good old listen. Maybe just the chorus though, those verses don’t make any sense. I all seriousness, Suits got all kinds of serious in “Leveraged.”  The most recent episode had all our favourite boys scrambling and yelling and reminding us that being pretty only works until you’re a jerk. It also had all our favourite women reminding the boys why they themselves are fantastic, and dumping the boys for being jerks. Don’t worry, the only thing that broke this week was my heart. No relationships were shattered just yet. We did however see the feisty side of Donna, and got a whole new look at Mike’s secretary, Amy (do we like her yet?).

Damn Right, Donna: Donna spent the episode scolding the boys for being idiots. First, she tore Mike a new one after he used a private conversation as leverage in his fight against Harvey. She even barred her feelings a bit when she said she wasn’t sure if they were still friends. Even his “guilt gift” couldn’t make her forgive him, mostly because she knew it was really picked out by Amy. Cue Amy saying what we all already know, “She’s even better than I imagined.” Well duh, Amy, you’re only three seasons behind. Later, Donna plays conscience to a guilty Harvey when she tells him to forgive Louis for letting his emotions get the better of him in court. But not even Donna could predict that Louis would mess up again and have Harvey bring him to near tears for the second time this episode. Remember when Louis was the villain? Now I find myself feeling for the guy in every scene. Do the Academy of Arts and Television know about this show? If so, how does Rick Hoffman get overlooked so often? Sorry, this was about Donna, I’m just not over the Emmy’s snubs yet.

Are We Sure About Amy?:  I’ll admit, I’ve warmed up to Amy after this episode. We finally got to see her for more than two minutes, and while she is getting better, I still don’t love her. She had me at “I’m getting my PhD in psychology, money bores me.” Ugh, I wish money bored me! But after Forstman said Mike could have his $230 million, I just want to be rich so I can say that one day. Only figuratively though, who gives that much money to someone just because they can’t drop a grudge? Amy started to lose me when she flopped on Mike though. Forstman wants him to cut Jonathan out of the deal when it closes. Sure, Mike was making a shady deal with Forstman, but earlier in the episode she said if he leave she leave. But then she also said that another banker wants to poach. So I really don’t know where she stands and that worries me more than anything. I don’t like vague Amy, pick a side, and just yell at the until they do they right thing, like Donna.

Really, Rachel?: Rachel spends the episode in relationship limbo. She lashes out at Mike for betraying Louis, and then spends the whole episode with her ex, Logan Sanders. Logan asks Rachel to evaluate five companies he’s looking to take over. She brings him five more, thinking that if he hates them, she won’t have to come to the board meeting with him. He does and he calls her out for not being professional. She does her jobs and lets him figure out for himself that his ideas suck because he’s not very good at this. This being everything. After Logan admits that he didn’t call the board meeting, Rachel remembers what modesty is and is taken down a peg when she realises he didn’t just call a meeting to spend time with her. She isn’t entirely wrong about his motives though, since after staying up too late, Logan tells her he loves her, and then tries to kiss her. She remembers who Mike is and walks away, wishing him luck. Good job, Rachel, that’s why we like you.

I’m Sorry, What Jessica?: That tag line took me forever, and it doesn’t have any alliteration because I have absolutely no idea what is going on with Jessica’s storyline. Ever episode so far she has started out hating Malone, and proving that her name is on the door for a reason. I love that, but why does it always end with her and him being romantic at the end? How do you wake up every day hating someone, and love them by the end of the day? Seriously, they could set their Facebook relationship status to “It’s complicated” and that’s the only thing that would make sense about it. Anyway, she tags along on Malone’s SEC case, only to find out that he was about to be fired before he begged for a job at Pearson Spector. Honestly, kudos to him, that was a great move. That’s totally a time for a Ron Burgundy “I’m not even mad, that’s amazing.” Jessica, however, did not see it that way, and went to the anger stage. Malone explained that he was only going to be fired because he wouldn’t go after Pearson Spector himself. Then he dropped a line that would later be reinvented by Mike. “Good lawyers negotiate from a position of strength, not weakness,” says Malone. “I’m not here from a position of weakness, I’m here from a position of strength,” says Mike. I understand reusing lines in order to reiterate the fact that a character has understood something another character has said, but Mike wasn’t even around Malone said it. You can’t tell me that two people that haven’t even met but run in the same circles just happen to use the same analogy on the same day? I’m not buying it. I smell lazy writing. Unless they’re going the Malone is a physic route, then I’m all for it.

The episode ended on a bitter note. I’m not entirely sure how it’s going to play out, but apparently the SEC isn’t targeting the firm, they’re targeting Harvey. Perhaps the whole grudge theme was foreshadowing Woodall’s grudge against Harvey for getting him fired.  Also, everyone was mad at each other, and Donna wasn’t in it enough. The scenes from the next episode seem to be spoiling some tragedy on the horizon. Here’s hoping there’s better days by season’s end.