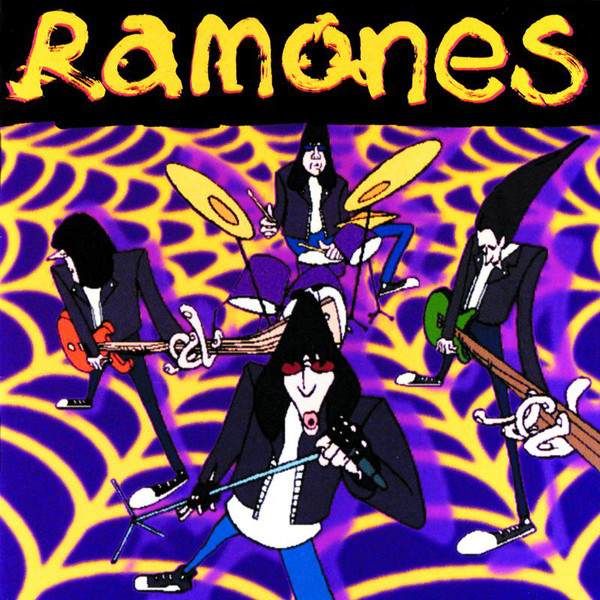 An Ode to the Ramones

A lot of people probably think I’m too young to be a Ramones fan.

I’m 30 now, which means I was about 12 when the Ramones broke up in 1996. I discovered the Ramones around that time and fell in love with them, but I never got to see them perform. Going to concerts was a bit beyond my purview at that age. But even though I never saw the band live, they still managed to change my life.

I grew up in Toronto listening to a radio station from Hamilton—Oldies 1150 CKOC. There was some contemporary music I enjoyed in the ’90s, but nothing moved me like the tunes of Chuck Berry, Fats Domino or Little Richard. I guess that kind of stuff seemed a little quaint to me even then, but there was no denying its primal power. Those songs were catchy and they went straight for the jugular. No extended guitar solos or even bridges. The blueprint went something like this: a 1-4-5 chord progression; verse; chorus; verse; chorus; 12-bar guitar/piano/sax solo; verse; chorus.

Just get in there and then get the hell out. Sure, the songs were mostly the same, but why mess with a winning formula?

At an early age I discovered what I wanted from music: short, fun songs that didn’t overstay their welcome. I wasn’t interested in tunes that lasted longer than two minutes, and I had no use for wanky guitar solos or musicians who felt a need to flaunt their virtuosity. I knew that being proficient on an instrument didn’t necessarily lend itself to good songwriting, and I wanted to hear fun songs, not music lessons.

I probably discovered the Ramones in 1995. They recorded a track for a tribute album called Saturday Morning Cartoons that came out that year—a cover of the Spiderman theme song. I saw the video for the song on MuchMusic and, my god, I loved it. That experience led me to think of the Ramones as cartoons. They were, of course, covering a song from a cartoon, and the music video itself was a cartoon, not to mention the fact that the Ramones sounded like a cartoon. They just seemed way too fast and energetic to be real.

So I proceeded on the assumption that the Ramones were in fact cartoons, and I’d tune in to MuchMusic all the time hoping to see the “Spiderman” video. I saw it a few more times, but one day I saw a different Ramones video. That’s when the fun really began.

This time the song was “I Wanna Be Sedated” and the video was even cooler. The Ramones sat almost motionless at a table while a wild house party unfolded around them at lightning speed. The whole thing was over in about two minutes, but man, what an awesome two minutes.

Now, as I mentioned, the Ramones barely moved in the video, and I was somehow convinced that the guys in leather jackets sitting at the dining table were just mannequin-like stand-ins for the real Ramones, who were, of course, cartoons. The song was just as cartoon-like as the other I’d heard, but this was even more special because it was an original Ramones song. It reminded me so much of the oldies I loved listening to—it was just a simple 1-4-5, no bridge, a couple verses and choruses, and it was over before you knew it.

I was so intrigued. At the time I didn’t realize the Ramones were a band from the ’70s who were on their last legs—I thought they were a hip, contemporary band who had the same musical sensibilities I did.

So I went off to the closest music store to buy a Ramones album with my allowance money. I didn’t have any concept of which album to buy—I didn’t even know the names of their albums. I just figured I’d get to the Ramones section and pick what looked like the best album (based on what, I’m not sure).

It turned out that the pickings were slim. There was only one Ramones CD at the store I went to—Greatest Hits Live. Not the best Ramones album—not by a long shot—but it was the only one available to me at the time. The front cover showed the Ramones as cartoon characters, further cementing my belief that they really were cartoons. I looked at the back cover for the track listing, saw “Spiderman” and “I Wanna Be Sedated,” and thought, Perfect—this is just what I need!

I got home and peeled the cellophane off the CD case, opened it up and took out the front cover booklet to have a look at the liner notes. There wasn’t much text—just a bunch of full-page images of the Ramones in cartoon form. My long-held suspicion was confirmed—there was no way the Ramones were actually real guys.

At 12 years old, I probably had only the vaguest concept of what a live album was. Certainly the Ramones couldn’t perform live, since they weren’t real. This must just be some cutesy, faux-live album.

Suffice it to say that nothing could have prepared me for what I was about to hear.

I put the CD in the stereo and hit Play. I listened to a few seconds of crowd noise intermixed with the rousing theme from The Good, the Bad and the Ugly, and then with minimal warning the Ramones launched into a breakneck rendition of “Durango 95.”

It was unlike anything I’d ever head before. The songs were so unbelievably fast. The band seemed to plow through everything without even stopping for air. As soon as one song ended, another would start. The band would only stop for the briefest of moments so some guy could shout “ONE, TWO, THREE, FOUR!” into a microphone before the next song started.

I had no idea what to make of it. It was so alien to me that I listened to the album again and again out of sheer fascination. I wasn’t even sure if I liked it—it was just so weird.

But it must’ve grown on me, because I soon went out and bought All the Stuff (And More), Vol. 1, which contained the first two Ramones albums—Ramones and Leave Home. That’s when I became hooked. The songs were so zany, catchy and primal. I would never have imagined that tunes about sniffing glue, beating on brats and shock therapy could fill me with such giddy delight. And yes, the songs were cartoonish, but to my amazement I discovered that the Ramones were not cartoons—they were actually real people.

Not long after that I had an epiphany. I remember it well. I was standing in the shower, playing air guitar to “Blitzkrieg Bop” (which must’ve been playing in my head) when it hit me—I could do this. These songs didn’t sound too hard to play. I could pick up a guitar myself and rock out just like the Ramones.

So that’s what I did.

I was fourteen when I got my first guitar. It didn’t take long to be able to play like the Ramones. Before I knew it, I got together with a friend who also liked the Ramones and we formed a band called the Sprinkles. I sang and played guitar, he played drums, and we occasionally had a bassist. We’d play Ramones songs and we also wrote our own primitive tunes. This was before Joey Ramone died and the Ramones became as popular as the Beatles, so most high school kids didn’t even know who the Ramones were. They probably thought the Ramones songs we were playing were our own original songs.

The years wore on and my Ramones collection grew (I now own every album, a bunch of DVDs, VHS tapes, posters, T-shirts and even Dee Dee Ramone’s rap album—which I love—on vinyl). As I got older I started to sing and play guitar in bands that were much better than the Sprinkles, but I could never shake the Ramones’ influence on my songwriting (not that I ever really tried to). The first real band I played in (by “real” I mean we played shows for money—usually not very much) was the Screamagers. Tell me they don’t sound like the Ramones. Today I play in the TrollBlazers. Also very Ramonesian, no? I even played in the Raclones, a Ramones tribute band (I was Dee Dee).

I did develop other musical tastes as I got older. I’ve played in several bands that sounded nothing like the Ramones. But the fact remains that if it hadn’t been for the Ramones, I never would have played in any band. The Ramones were my inspiration.

I tend not to get overly emotional when celebrities I admire die. If I don’t know someone personally, I just don’t feel that much of a connection. When Joey Ramone died in 2001, I remember being surprised because he was so young. I’d heard he was battling cancer, but for some reason I thought he’d be OK. I knew then that I’d never get to see the Ramones live—any faint hope of a reunion was laid to rest with Joey.

Dee Dee died of a heroin overdose the following year. When Johnny died of cancer in 2004 it seemed like the band was cursed or something—everyone was dropping like flies.

But it would be another 10 years until the last original band member died. Tommy passed away last Friday—also too young to die, but at least he made it to his 60s, which was longer than any of the others lasted.

Without having known the Ramones personally, it’s hard for me to get too distraught over their deaths. I didn’t know them, but I do know this: I’ve played in some really cool places with some really cool bands. I never would’ve had any of those experiences if the Ramones hadn’t inspired me to pick up a guitar. If it weren’t for the Ramones, I wouldn’t be the person I am today. I can’t even imagine what I’d be like. Who knows—maybe I’d be better off. A wealthy investment banker or something. But I’m happy with what I’ve got today, and I wouldn’t have it if I hadn’t discovered the Ramones.