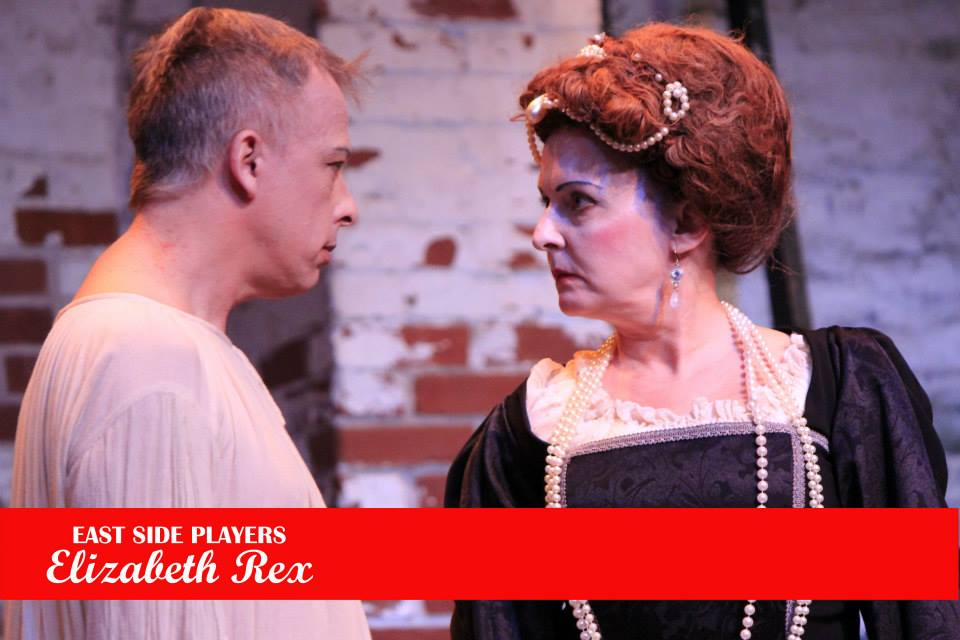 An Evening with Elizabeth & Ned

At the Papermill Theatre last week, the East Side Players premiered one of the most ambitious and beautiful works in the Canadian theatrical canon- Timothy Findley’s Elizabeth Rex. The complex hypothetical places the “virgin” Queen rather outlandishly in the barn where Shakespeare’s troupe The Lord Chamberlain’s men are lodging after performing Much Ado About Nothing on the eve of the execution of Elizabeth’s traitorous lover the Lord of Essex (aka Robert Devereux who is having a bit of a moment in Toronto). Over the course of 10 hours played in 2, her majesty takes solace in the wit and wisdom of the players, in particular those of Ned Lowenscroft the actor who played Beatrice (a feisty character to whom Findley imagines the Queen could easily relate).

The playwright’s premise is a little nutty but his play is actually deceptively simple- just two people in a room learning about the world and themselves by learning about each other. Other people are there too (the wasted framing device of Shakespeare recounting the story on the night of his own death even suggests that the piece is supposed to be a trio) but they needn’t be. This is the tale of Elizabeth and Ned, and no one else.

The East Side Players’ current production is, though somewhat accidentally, an apt encapsulation of all that Elizabeth Rex is- both great and flawed. Within the very large ensemble, overacting is so prevalent that my instinct is to blame it on director Jan Francies, though it’s just as likely an issue with the casting pool since Francies otherwise does a fair (if a little stagnant) job of navigating the action, aided greatly by the helpful levels in designer David August’s excellent set. The accents are all over the place (if everybody can’t be believably British, no one should attempt to be British; we’ll suspend our disbelief) and the supporting characters are all either cartoons or complete blanks. But that’s the first glance reaction, the “hold up, the Queen is hanging out in a barn?!” side of the story.

As I said, this is the story of Elizabeth and Ned; who cares about the rest of it. And Elizabeth and Ned are marvellous in their present incarnations at the Papermill. 2012 My Theatre Award nominee Michael Harvey and the sublime Lydia Kiselyk are an entirely different class of actor than the rest, proving once again the power of smart script selection- these are roles of a lifetime in a rarely produced piece, that’s how you attract talent to a community company. Wonderfully, Harvey and Kiselyk are every inch worthy of their deep and demanding roles. Harvey is a magnetic, energetic delight but also delicately heartbreaking as the dying actor Ned, aptly justifying the Queen’s fascination with him. But it’s Kiselyk whose entrance really picks the play up. With the ever-impossible task of embodying an icon and a wholly unique character simultaneously, Kiselyk dives deep into Findley’s insightful interpretation of Elizabeth and delivers a fully realized human portrait of a woman we thought we all knew. Both are remarkable performances, made all the more better by their complex interplay. It ultimately doesn’t matter that the theatrical world around them doesn’t live up to their standard, in fact, it makes a strange and beautiful sort of sense.

Other Things the East Side Players Got Right:
– Calvin Combdon nails it with the makeup from the players’ stage white to Ned’s lesions to Elizabeth’s desperate powders.
– Over-theatrical as his line deliveries all are, the tenderness with which Youness Robert-Tahiri tends to Ned’s wounds as his helpless lover Harry Pearle is a silent moment of sad loveliness.
– Chris Quirke succeeded in improbably charming me with the very awkward cuteness of his background wooing of a cardboard cutout of Lady Mary Stanley (not actually played by a cardboard cut-out).
– It’s ridiculous that there is a bear in this play. That’s just asking for all productions ever to look stupid, no matter how thematically crucial said bear may be. But by god if some lucky combination of the right costume and carefully nuanced performer Adam Connor didn’t totally pull it off. *Slow Clap*