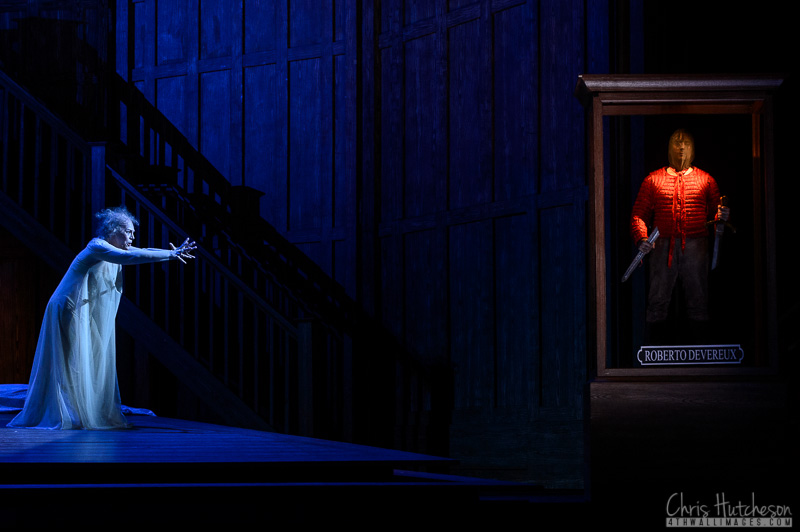 All Hail the Queen: The COC’s Roberto Devereux

Out from the looming shadow of Peter Sellars’ agonizing Hercules, The Canadian Opera Company is crawling back to the light as they close in on the end of their generally strong 2013/14 season. Said light is shone by thoughtful director Stephen Lawless onto Donizetti’s emotionally mature and structurally sound opera about the great and confounding Queen Elizabeth I.

The piece may be named after the doomed tenor but Lawless makes it utterly clear in his director’s note that he believes this to be Elizabeth’s opera. Unlike many an idea dynamically argued in a director’s note, this one has legs. Lawless begins with a prologue that tells of Elizabeth’s reign and current predicament, played out in admirably restrained pantomime as though on Shakespeare’s stage (a clever nod to the artistic boon and legacy of the Elizabethan era). The frame of the Globe theatre remains throughout the opera, adding visually appealing physical levels and intellectually intriguing thematic ones as the chorus oversees Elizabeth’s actions (oh how I love a useful frame). Lawless keeps the focus on his conflicted heroine of choice, sprinkling poignant notes humanity and history into the romantic drama to remind the audience that there’s more tearing at Elizabeth’s nerves than unrequited love (her wigless appearance in the prologue and finale are particularly effective, as are the looming figures of her mother, father and younger self in glass museum cases).

In my estimation, Lawless’ sole misstep is his obscenely awkward approach to scene transitions. Designer Benoit Dugardyn’s set is sparing and clean, the stage filled out by dynamic, grounding performances in little need of ocular aid. It’s strange, then, to have the audience sit in strained silence as a remarkably slow run crew transitions the space to signal a new location. The changes are slight but somehow seemingly impossible to execute in a timely fashion and only one shocking twist at the close of III.i makes the differentiation of space worthwhile. Even the most tightly paced of operas doesn’t benefit from being drawn out any further and the bizarrely uninventive transitions here thus feel interminable.

As for the performances, a generally good, though largely unmemorable, group are present to support our heroine and it’s always a relief to see performers bring their acting A game, especially when playing a story this strong. Canadian Russell Braun makes a strong return to the COC as the conflicted Duke of Nottingham though I’m not sure that Leonardo Capalbo’s well-sung title character has quite enough chemistry with Allyson McHardy’s strong-willed and sympathetic Sara to really sell the necessary romance. Ultimately it all falls to Sondra Radvanovsky to make Devereux fly and she does so heartbreakingly with a beautifully felt performance as Elizabeth. A few questionably placed breaths aside, Radvanovsky’s powerhouse soprano (which I’m tempted to call a mezzo because the part is dramatically lower than standard soprano) perfectly conveys the desperation and determination in Lawless’ chosen protagonist.