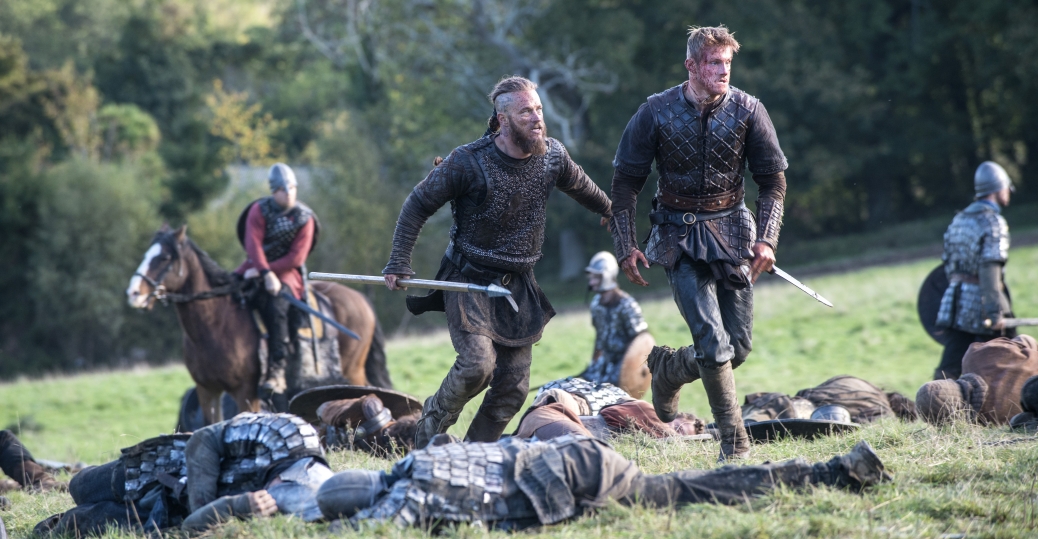 The first half of Vikings’ second season was incredibly strong, with each episode building and gaining momentum. The second half of the season hasn’t lost its momentum, but it’s kind of like a runaway cart, where it has gained so much momentum that it leaves the audience running to catch up.

The biggest problem is rushing character development. The most obvious of gaps in character development belongs to Floki. His decision to turn on Ragnar was incredibly abrupt. He went from being Ragnar’s right hand man to not-so-secretly plotting against him. I thought I had missed an episode somewhere, because this change completely blind-sided me. There was no breaking point, nor any slow simmer of resentment. Things seemed peachy between the two, until all of the sudden they weren’t, and there hasn’t been a satisfactory explanation so far.

Bjorn’s love story also seems incredibly rushed. I’m not convinced of the necessity of him having a love story. Bjorn has a lot going on without courting Porunn. It seems like a producer somewhere went, “We have an attractive young leading man. Quick! Throw a poorly executed love story at him”. One minute Porunn seemed completely reluctant, then suddenly she and Bjorn were declaring their love to each other, and had to deal with the disapproval of society because of her lower social status. It’s not that Alexander Ludwig and Gaia Weiss aren’t good as a couple. It’s just there’s a bit of whiplash from trying to keep up with the pace of their relationship. (You guys are in love? ….since when?) It feels like a bit of a wasted opportunity not to build their relationship more, or explore the class difficulties between the two, especially since Bjorn is destined to marry the daughter of a king.

Another storyline that could have used some more exploration: Athelstan’s. His internal struggle between his Christianity and his adopted Viking family has been building since pretty much his first appearance in season 1. He spent most of season 2 living with the English again after being captured. Athelstan had never quite fit in with the Northmen, and he quickly realized he was no longer exactly an Englishman. Aside from being fascinating to watch, his internal conflict also enriches the more obvious external conflicts between the Christians and pagans. While he decided to return north with Ragnar, saying Ragnar and his village were family, hopefully that wasn’t the end of his struggles, and there will be more of Athelstan trying to find a balance between the two worlds. Being a favorite of both Ragnar and King Egbert, Athelstan demonstrated that both worlds can (theoretically) peacefully co-exist. Co-existing wouldn’t be easy or without its struggles, but there are options other than simply violence. It seems like Athelstan will still be (hopefully) a key player as the two cultures figure out what to make of each other.

For the time being, at least Athelstan is safe. Safe-ish. No one on the show is ever really safe. But he is back with Ragnar, and Ragnar and his family and loyal allies seem happy he’s back, and won’t kill him for being Christian, unlike say Floki and Horik. Ragnar’s little dysfunctional family is an unexpected delight. Aslaug has become way more likeable from her first few episodes; once she had things to do other than be ‘jealous wife’ and ‘famous person’s daughter’, she became a lot more interesting. She and Lagertha also seem to have come to a place of peace, which is good, because now maybe they can band together to combat Ragnar’s stubbornness.

Lagertha‘s storyline has been one of the most dynamic this season. After leaving Ragnar, she remarried an abusive Earl, stabbed him in the face after he tried to publicly humiliate her, and became Earl in her own right. Her second husband’s death was satisfying, even though someone else ended up dealing the fatal blow. It was a bit of a Neville Longbottom moment, where you really wanted Neville to be the one to kill Bellatrix, but in the end, you’re just glad Bellatrix is dead.

The other problem with this is the man who actually killed Lagertha’s husband tried to force himself on her in the latest episode.  This is the fourth time I can think of over the course of the show when someone has tried to rape Lagertha, and it’s offputting. I found it unnecessary in the pilot episode, and I found it unnecessary in the latest episode.

While sexual violence against women is something that has unfortunately happened throughout history, this pattern of ‘Lagertha is threatened by disgusting perv’, ‘Lagertha defends herself against disgusting perv’ feels like a cheap way to establish that Lagertha is a badass. We’ve seen her on a battlefield. We know Lagertha is a badass. Even though she is always ultimately successful against her assailants, it’s annoying the strongest woman on the show is continually put in situations where she has to defend herself against would-be-rapists. Like I said, sexual violence against women is an unpleasant reality of our world, so having this happen once or twice is understandable if not desirable. But after the last episode, it was kind of like, really? This guy too?

Despite my gripes, I’m still enjoying the show. The biggest problem with the second season is it feels like an outline. The existing stories are mostly strong, but pretty much all of the storylines could be fleshed out. It would be nice if for some reason, History decided to increase their season 3 10 episode order.