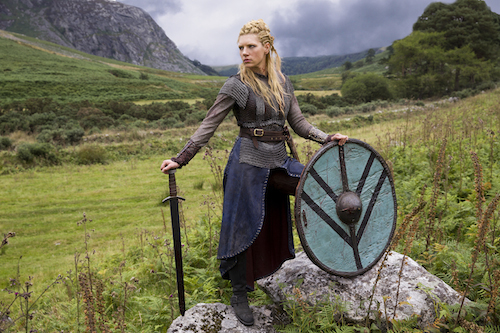 Actress Katheryn Winnick has been in some of TV’s most popular shows from Law & Order, to Bones, to Vikings, which she currently stars in as Lagertha.  I spoke with Katheryn over the phone about Vikings’ second season, the challenges facing her character and what it was like to play a warrior woman.

Congratulations on coming back for a second season. Did any of you anticipate how popular or successful the show would be when you were filming the first season? And how much the fans would support the show?
First of all, it’s so overwhelming and incredible just to see the amount of fans that we have accumulated. It was the number one new cable show last year. I think we had originally like 4.3 million viewers and it just seems like it’s just growing and growing. So it’s so great to actually do a second season, and we’re keeping our fingers crossed for Season 3.

Coming back in for season 2, did you prepare for the role differently at all?
Season 1 I feel like I got thrown into the deep end. I was one of the last members of the original cast; I got thrown into Ireland probably a week before we started shooting. So I didn’t have that much time to do my research and prepare for Season 1. You just kind of have to figure it out on the go. But in season 2 it was a lot easier to step into it because you know your character more, I knew where Lagertha came from. At the end of Season 1, we ended up in episode 9 where she had to deal with a lot. She not only miscarried Ragnar’s son, but she also lost her one and only daughter. She also was dealing with the community and a lot of her people through the plague and really trying to hold it all together while her husband is raiding and off pillaging.

Season 2 picks up pretty much right directly after and of course there’s rumors of him being with the princess Aslaug and sleeping with another woman. And there’s a lot of unresolved issues. And I think we’re pretty much starting off exactly where we ended off, so I think a lot of viewers will appreciate that. And coming into the second season, it was an easier transition, because everybody really knew each other and it’s not like we had to fill in too many holes. There is a time jump between episode two and three , well, really between one and three when there’s a four year gap and that’s when I had to do a lot more research and kind of figure out and fill in the holes of where Lagertha lands and what she’s been doing for the last four years. How, how her relationship has changed with the people around her, with Ragnar, with her son Bjorn, how she changed within herself. What has happened in the last four years.

That was a harder transition to discover, and also to create more of an impact, physically to show that there is a four year gap. And I did that by working with the costume department and the hair department to show that she’s out of her comfort zone. The hair’s kind of really pulled back and it’s a very different look for her. All those things kind of helped sell the story of where we’re at in Season 2.

Did you talk at all with Michael Hirst or Alexander Ludwig, who plays older Bjorn, about what happened to Lagertha in those four years and the progress of the characters?
Michael Hirst was busy writing. He also gives us a lot of freedom to create what we want in terms of filling in the holes ourselves. He gives us the framework of the storyline, the bigger plot points, but he also allows you to give your own spin on it. And with Alexander, his journey could be a little different. It was his first time on set in episode three and I was the first actress that he worked with and I’ve been a big champion of Alexander. We screen tested him, me and Travis screen tested him back in November last year, or December, I believe it was. Because we were looking for someone to be the older version of Bjorn. And I liked him.

It was great to just to work with him and brain storm and create what happened in the last four years. And we just did that on the set. So I really enjoy working with him. The hardest thing was really just he’s massive and tall. He’s a very talented an actor. I think a lot of fans will really appreciate him in this role.

I actually got to see episodes three and four and the mother-son relationship feels very different. Can you talk a bit about what it was like exploring that with a grown up Bjorn, rather than a child Bjorn.
Well, first of all, it was difficult for me at the very beginning, to have a child. I don’t have any kids yet, so for me it was a hard time originally when I got cast. They thought I was too young looking to play somebody who had two kids and I remember fighting with them and trying to get myself all raw and more undone for my screen test before I got the role. And it was definitely a challenge, but at that time people had kids at thirteen, fourteen, fifteen. So they popped them out a lot faster, so it was definitely a challenge and seeing him come into a man and seeing him coming in to his own, and becoming a warrior and all those things I was, it was interesting to try to discover that.

But she’s also a warrior, so she wants the best for him. So their relationship is definitely strong in season 2, I don’t know how much I can give away without giving too much away, but they definitely have a strong bond, and especially he has defended her for many years, and she has [done the same] for him, so it was challenging, but fun too, to say okay, what would it like to be a mom? But now it’s what’s it like to be mom to a tall hero, tall warrior. One day I’ll find out.

You mentioned how she’s a mom but a warrior. That’s one of the things I thought was really interesting about Lagertha because in a lot of film or TV ,a woman can be a mother or she can be a warrior, but Lagertha kind of reminds us that women can do both, women have done both. So can you talk about what it was like to play this historical figure who’s kind of shrouded in mythology, but is still really relatable to people from the modern era?
Yeah, I definitely think she’s modern for her time. She can do both. She can fight along the shield wall with her husband and son and brothers but she also can be feminine, and can be sexy, and can be young, and a mother, and a loving wife, and use her sexuality and embrace her femininity, and that’s what really attracted me to the role. She’s not only strong but she’s also vulnerable as well, and feminine, and it’s really kind of like the modern woman who now juggles a career and dealing with employees and also coming home and being a loving wife and a mother and she really does it all.

And I think that’s what makes this character, what makes Lagertha so relatable and so you hopefully root for her. Because you know that she has different sides of her that every woman has. I hope that the show captures that, which I feel like is a huge honor. I’ve been a big fan of Michael Hirst since he wrote The Tudors and Elizabeth. What he did with Cate Blanchetts’ character in Elizabeth, having historical accuracy and showing that, has always made me want to work with him and shown me that even though they’re strong women, there’s another side to them and to show that side as well is more attractive to me. Strong yet vulnerable, strong yet feminine. [Laughs]

She’s like a real woman.
She’s a woman! Even though it’s in Scandinavia in the eight century, you get a glimpse of her with her daughter, of her teaching her how to weave, you’re getting a glimpse of her also fighting and also cooking and making love to her husband. All those things are really a modern woman even though not necessarily in that time period, but it is now.

My last question is: if you, Katheryn the actress could take Lagertha aside and give your character one piece of advice for the rest of the season, what would it be?
Kick Ragnar in the balls.[Laughs] Kick him where it hurts. He has something coming for him, because she’s a force to be reckoned with, Lagertha. He cheated on the wrong gal.