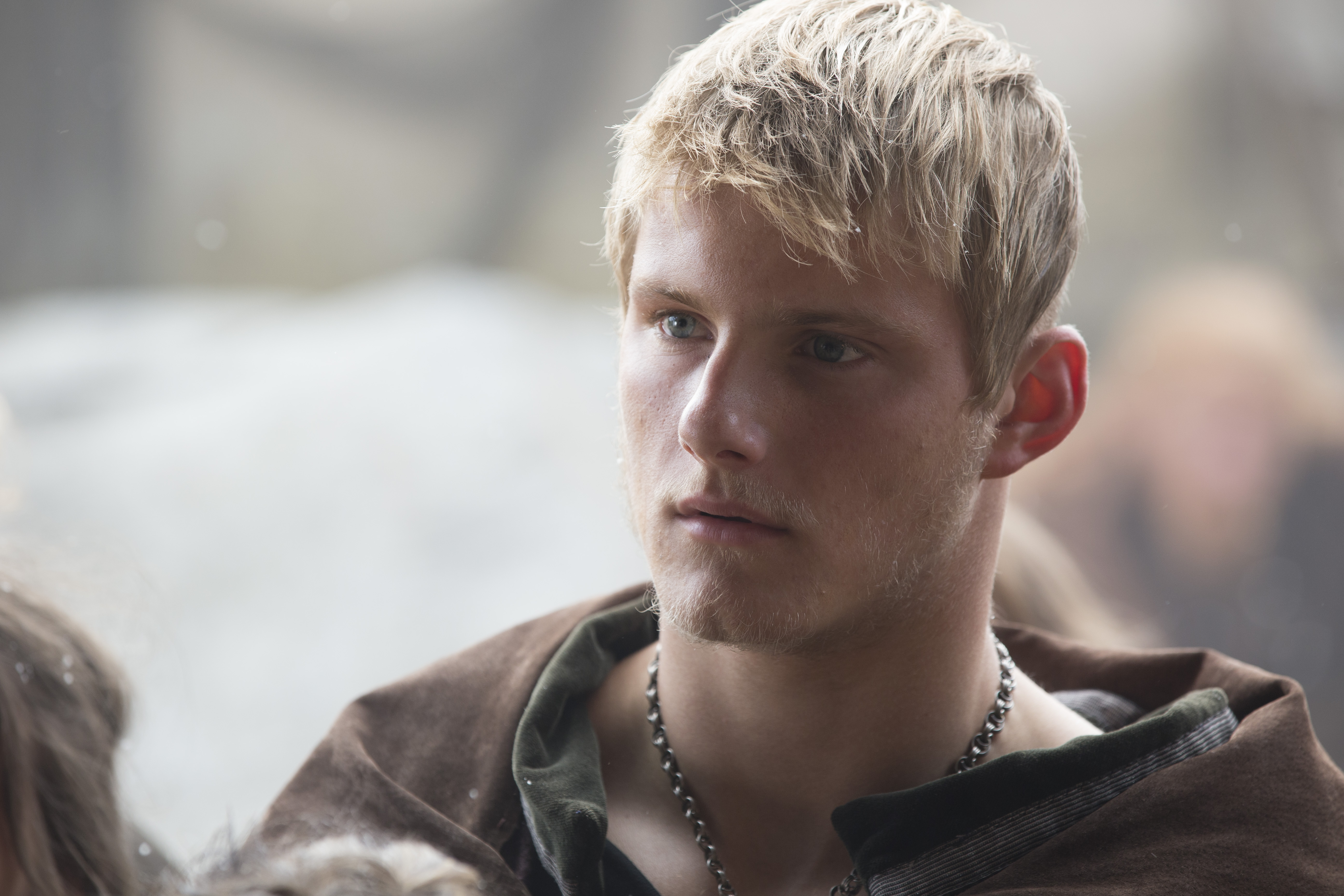 Actor Alexander Ludwig is no stranger to intense roles, having appeared in films such as The Hunger Games and Lone Survivor. Last week, he joined the cast of Vikings as Bjorn, son of Ragnar Lothbrok. I spoke to Alexander over the phone about what it was like to join the show and about portraying a character who ends up being a legend in his own right.

And don’t forget to check out our Exclusive Interview with Katheryn Winnick (who plays Alexander’s mother on the show) as well as our Episode Reviews.

Congratulations on joining Vikings for the second season. Had you watched the show before being cast?
Thank you so much. When I was first called about doing Vikings, I’d seen a lot of publicity for it around Los Angeles but I had never had a chance to see it because I was so busy but I always though it was such a cool show, and the next thing I knew, I got a call from one of my reps saying the heads of History would like to meet with you about possibly playing a role in Vikings. So then I met with them, and we had a really great meeting. I met with Travis [Fimmel, who plays Ragnar]and Katheryn [Winnick, who plays Lagertha], and I told my buddy, he said, “Where are you going?” and I said I’m going to a meeting for Vikings and he freaked, he was like dude, you have to do this role, it’s amazing, it’s my favorite TV show and I talked to some of my other friends and they all said the same thing. So apparently I was the only person who hadn’t seen the show.

You play Bjorn, who is the main character, Ragnar’s son. You took over the role from Nathan O’Toole. How did you approach playing a character that the audience has already met and sort of knows? Did you talk to Nathan at all about the role, or did his performance influence you?
He absolutely did.  And I just want to say kudos to him because I thought that he did an excellent job, for such a young actor and he’s such a very young talent and he did a phenomenal job. I did speak with him, but I actually spoke more with our writer, Michael Hirst. I looked at foundations already laid for Bjorn .

Four years have gone by, and a lot can happen in four years. I know I’m not the same guy I was a year ago. So, I actually had a lot of leeway to really to do what I wanted with Bjorn. I did keep the sincerity of the character and also the intensity of Bjorn.

Like you said, a lot can happen in four years. So can you tell the audience what Bjorn personally experienced? What we can expect from his emotional or his psychological state?
At the end of the first season you’re left with a lot of issues that are unresolved. By the start of the second season, those are resolved and a lot more issues are brought into fruition and it’s very amped up from the way the first season was. Bjorn is caught in the middle of a struggle between his mother and father and there’s all this tension there and he has to make some pretty big decisions and he’s kind of caught, and he’s just trying to find himself. So the audience and the fans of the show can really expect to see Bjorn make a really big transformation from a young man emotionally into the warrior and laying the bricks upon which the foundation of this great legend, Bjorn Ironside was built. Because he was a real guy and he went and did some pretty incredible things.

Did you do a lot of research about the historical Bjorn or did you just sort of go with the scripts that you were given?
No, I did a lot of research. I wanted to see would happen with my character and I wanted to talk with Michael Hirst, our creator, our showrunner, and our writer about what Bjorn had in store for him and where his future would go. And I consulted him many times in depth about what would happen and he basically just told me to prepare for a wild ride and that Bjorn did go to do some incredible things, arguably more than his father did and he was arguably more famous than his father so in the second season there’s definitely a little bit of foreshadowing as to what will happen with Bjorn’s character.

You and Katheryn Winnick, who plays your mother have a really believable mother/son dynamic. Did you and Katheryn Winnick do anything special to bond, or did you just sort of click right away?
Thank you so much. That means the world to me. I will say that we did click right away. She’s a fantastic girl and we became very close when we were filming and I think it was just very organic the way we connected.

You’ve had a pretty diverse filmography over the years, but correct me if I’m wrong, this is your first time being on a TV show. Can you talk a little bit about what it was like adapting from being a film actor to being a regular on a TV series and with such a dynamic story arc?
Absolutely. You know, to tell you the truth, I never thought I would ever do a TV series in my life. Film has always been where my heart has been. However, finding a great script in movies and in television is far and few between and the truth is it’s television right now where the content is so exceptional, especially on this show, so it was kind of a no brainer for me, and it was the best decision I’d ever made in my career to date because I got the tremendous opportunity to work with some exceptional actors, and continuously working on a day to day basis and you get a lot more time to really [work on your character]. In a movie [you have] two hours to show a character arc whereas on a TV show you really get years to show the growth of a character. And it’s really a tremendous opportunity to show some depth.

A lot of people probably know you from The Hunger Games where you played one of the Career tributes, Cato. Did your fight training from the Hunger Games carry over at all, or was it a completely different physicality for Vikings.
Well, obviously the more training I’ve had for fight scenes is always helpful, however I will say that one thing I love about this show and that I think the fans really love the show for is that they don’t try to glamorize anything. It’s not glamorized by these Hollywood ninja fight scenes. It’s very much a schoolyard brawl, and that’s how it was back in those days. It was “what’s the quickest way I can overcome my opponent?”, and that’s one thing I love about this show. The only thing that I would say that carried over was my ability to memorize or adapt to choreography for a fight scene. But, really, the huge fight scenes that we’re doing are so enormous, right after the director says ‘action’, it’s kind of like a dance, but no matter what you rehearse, it basically all goes to shit when the director says ‘action’. You gotta be close to it and try not to get hit because there’s literally like axes and swords flying everywhere.

So it sounds like you did a lot of the fight scenes yourself.
We did them all by ourselves. And that’s one of the things I love about the show, I told them I want to do all my own stunts.

Wow. I didn’t realize you did all your own stunts.
Yeah. Yeah, it was great, I got to ride a horse and do everything.

Well let’s hope it doesn’t come to that. I have one more question for you. If you, Alexander, could talk to Bjorn and give him one piece of advice for the rest of the season, whether or not he chooses to listen to it, what would it be?
If I was giving Bjorn advice? I would say “Hey buddy. Go find a girlfriend and go sail to new lands.