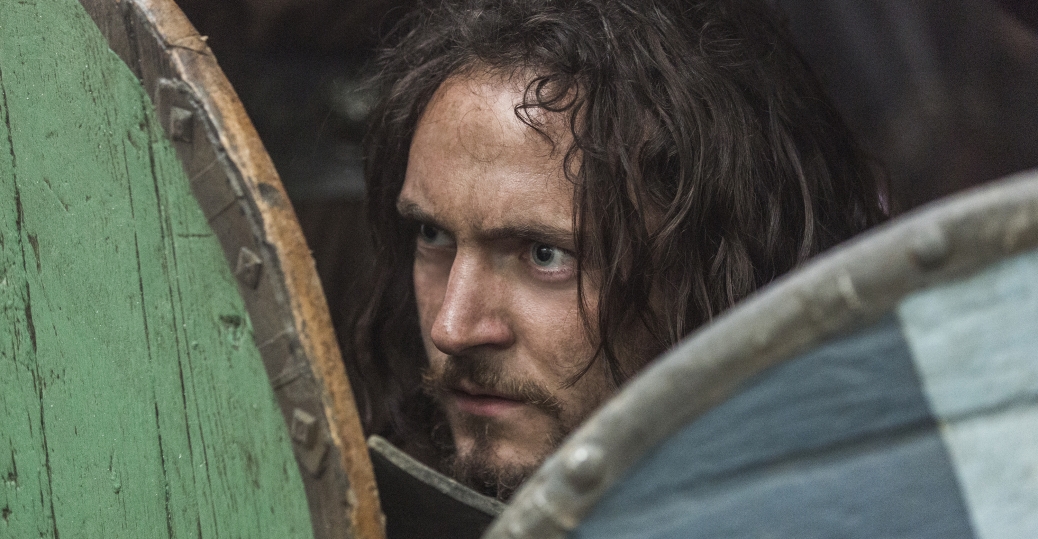 Vikings just keeps getting better and better. The second season started out strong, and so far, hasn’t slipped up. There was a lot going on this week (including several new cast members) and pretty much all of it was good.

Let’s start with Athelstan. I’ve said it before, and I’ll say it again: Athelstan’s story arc is one of the best parts of the show. This episode had a lot of call backs to his first episode when he was kidnapped from his monastery. It even featured a scriptorium, in the most obvious parallel scenes of the episode. Athelstan killed a young monk, and clearly recognized that his victim could easily have been himself, five years ago. The killing was done more reflexively than out of malice, but his regret was still evident. It contrasted with his purposeful mercy killing of a bishop the other Vikings were torturing. Athelstan is now a man of contradictions: he uses his insider’s knowledge to help the Vikings plunder holy relics, but he still is reverent towards the artifacts, despite trying to hide it. He tries to blend in with the Vikings to survive, but he isn’t immune to the brutality of their actions. It’s a kill or be killed world, and Athelstan is struggling to decide if he wants to save his life or his soul.

Next, let’s talk about Ragnar. I’ve had issues with Ragnar since last season’s episode eight, “Sacrifice” when he almost sacrificed Athelstan to the gods. Then he cheated on his wife and publically humiliated her….suffice it to say, I was not too thrilled with the show’s main protagonist. This episode reminded me why I liked Ragnar in the first place. Leading a raid into England, Ragnar was in his element. He’s a skilled warrior, but he still shows more mercy than his compatriots. He even seemed a little put off by their unnecessary killings. He’s also smart, and that’s what sets him apart from everyone else. While King Horik sees wealth in the glittering jewels, Ragnar sees potential in the land. He’s a man of vision, and this is what’s ultimately going to get him ahead.

That is, if he can get his home back. Last week, Ragnar had to uninvite Jarl Borg from the raiding party. This week, Jarl Borg, left all dressed up and with nowhere to go, decided he’d take his warriors and take over Ragnar’s territory. It looks like this is finally Rollo’s time to shine, because he’s not good at a lot of things, but he is good at fighting and killing people. For now, he and Ragnar’s family are on the run, but the writers will almost definitely incorporate this into Rollo’s unnecessary redemption arc.

I really appreciated Siggy in this episode when she came out in warrior clothes, ready to fight Jarl Borg’s men. She is prepared for pretty much anything. She made nice with the Lothbroks, but also is spying on them for Horik, so I’m not surprised she had a battle outfit lying around. Say what you will about Siggy, but she is on top of things. Ragnar is lucky she’s not actively plotting against him, because she would have back up plans A-Z. Unlike Jarl Borg. He might have the upper hand for now, but it seems like poor long term planning. Ragnar is eventually going to come home, and have all his best warriors with him, so it probably won’t end well for Borg. For now, Ragnar has other fish to fry.

A new adversary for Ragnar was introduced this week, in the form of King Eckbert. Maybe it’s because the Vikings were especially brutal this week (come on, guys, you stole everything in the church, did you have to kill all the innocent civilians too?), but I found myself rooting for Eckbert a little bit. Despite the fact that he awkwardly holds his council meetings in his giant bath and name drops Charlemagne like nobody’s business (Sorry, whose court did you stay at that one time? You weren’t clear.), he is a worthy antagonist.  While the Vikings completely destroyed one of his towns, it wasn’t because he didn’t have the force to meet Norsemen, but because he wanted to see where and how they would attack. He’s the first of Ragnar’s opponents who has the confidence, curiosity and intelligence as him, and it could make him a dangerous new addition to the cast.

The new addition to the cast was Alexander Ludwig, who very convincingly took over the role of Bjorn.  There are aspects of Bjorn that are consistent with the younger version. He still speaks painful truths that people need to hear, and isn’t afraid to speak his mind. But he’s more restrained, and more serious.  Ludwig does a strong job of showing a displaced young man trying to find his place in the world while still maintaining some of Bjorn’s inherent confidence.

While Season 1 focused a lot on Bjorn and Ragnar’s dynamic, I’m excited for Season 2 to look more at Bjorn and Lagertha’s dynamic. Bjorn always admired his mother and tried to protect her, and that still holds true. They seem closer now than ever, but unfortunately, that bond seems to have been forged through adversity.

Lagertha remarried, and her new husband is abusive, cold and cruel. She clearly doesn’t love him, and viewers by this point know that Lagertha never hesitates to defend herself verbally or physically. The obvious conclusion is she married this new Jarl because she believed his status and power would benefit her son. So she puts up with him for the sake of Bjorn. Bjorn on the other hand wants to protect his mother from her new husband, but he also wants to listen to her and respect her wishes. They’re both trying so hard to make the other one happy, but are both miserable. Despite the despondency of their situation, there’s a real sense of mutual love and respect. Ludwig and Winnick have excellent chemistry together, and it feels like they’ve known each other for years and have a history together. While their characters are still reeling after major life upheavals, I’m excited for when they finally find their footing, because I am absolutely confident that when they do, this mother/son duo will bring a reckoning with them.

Other thoughts: What happened to the baby goats? I didn’t see Aslaug take the goats with her when she fled to the mountains. Are they still in the village? And if so, will Jarl Borg spare them?