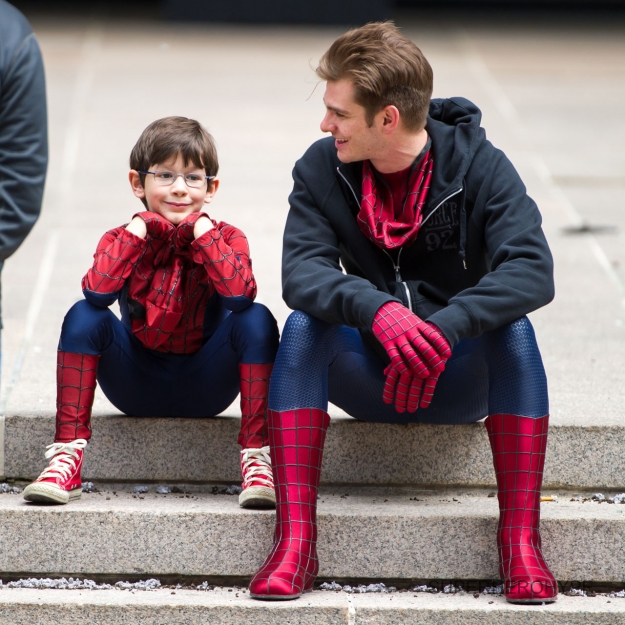 It’s pretty rare that I get to walk into a movie theater with little to no expectations – even rarer for that to happen with a big budget superhero movie. But somehow, magically, that’s what I did for The Amazing Spiderman 2.

When I saw the first of the re-booted Spiderman movies, I felt it was a complete rehash of the Sam Raimi Spiderman, but done more correctly. The second film doubles down on that. Andrew Garfield is MY Spiderman – he’s the one I grew up watching on TV. He’s quippy and smart and angry and sad, and a huge goofball. But the movies, in contrast to the Raimi films’ tone of superhero gloss, take his antics and relationships seriously.

Never is this more clear than in the Amazing Spiderman 2, a film that struggles a lot with pacing and stuffing everything it wants into its running time, but that succeeds wildly at characters and investment. The movie races by plot points with the efficiency that has come to define director Marc Webb’s style for me, but it also knows when to take its time. It lingers on scenes that define relationships, like Gwen Stacey and Peter Parker demonstrating their easy, eager chemistry over a walk through a carnival, or Peter Parker and Harry Osborne rekindling an old friendship while playfully hanging out on a pier. These are moments full of little touches – Osbourne’s smile, Parker hanging off a railing, Gwen’s reluctant sadness – that speak volumes about the character’s relationships. The same is true for the relationship with Aunt May who, as inhabited by Sally Field, has more life, vibrancy, and emotional truth than any other iteration thus far.

A particular delight was Jamie Foxx as Max Dillon, one of Marvel’s semi-patented “bad guys who are actually victims of circumstances.” Often, the pathetic nerd turned super villain can feel campy and ill formed, and in a lesser actor’s hands Dillon would easily fit into that mold. But Foxx make’s you feel Max’s journey into Electro, and really buy into the emotions that cause his downward slide.

The movie manages to avoid sequelitis, despite being slightly over stuffed. Although it’s filled with world-rocking changes and heartache, the movie seems to delight in having all that origin story crap out of the way so it can get at the heart of the matter.

There really is not enough digital ink that can be spilled about Andrew Garfield’s take on Spiderman, or how delightfully real he makes the guy seem. And the movie Gods were feeling particularly beneficent when they dropped Emma Stone into the traditionally thankless role of the movie girlfriend. Together, Gwen Stacy and Peter Parker feel REAL in a way that they have no right to feel. There relationship feels lived in, comfortable, and fraught in all the ways you want it to feel.

The music, produced by Hans Zimmer and Pharrell Williams (one of my favorite partnerships in movie music), is across the board fantastic. There’s a particularly show offy piece that in a lesser composer’s hand would have felt like overkill, where the transformation from Dillon to Electro is underscored with a song who’s hard bass beat and repetitive words are actually the soundtrack to Electro’s head. It’s heavy handed symbolism, but it’s also so damn cool, and symptomatic of the narrative efficiency that makes the Amazing Spider-man 2 work so well.

I don’t want to oversell this – there’s nothing particularly deep going on beyond the surface of The Amazing Spiderman 2 beyond the usual superhero themes of duty, love, grief, and justice. But it’s done so well, so carefully and authentically, that it feels like you’re seeing something new. And for a series that started as a reboot of a reboot still fresh in our minds, that’s nothing short of amazing*.