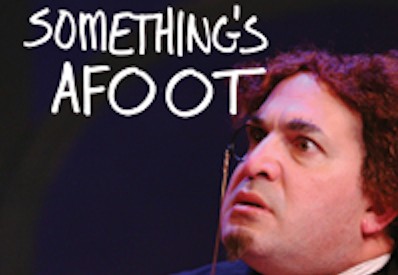 Here’s the thing: I had never seen Something’s Afoot. I had never even heard of it and I don’t think that many people have. Written by James McDonald, David Vos, and Robert Gerlach, with additional music by Ed Linderman, the original production opened on Broadway in 1976 and ran for just 61 performances. With very few local or regional productions, it isn’t all that bizarre that I hadn’t heard of it, but I was so prepared to love it.

Murder mystery spoofs are just plain fun. Think Clue or, to a much lesser extent, Curtains: campy, silly, over the top fun with pokes and jabs at the novels by Agatha Christie and other detective stories. Unfortunately, in spite of the fact that all the expected conventions are there, Something’s Afoot feels more like Something’s A-foul.

Set in the sprawling island vacation home of one absent Lord Rancour, six guests who supposedly have no prior relationship with each other arrive for a weekend getaway. Just as the guests begin to settle and get acquainted, they discover that their host is mysteriously dead and the bodies keep piling up as the rather predictable and uninspired script plods along. With nowhere to go because ::gasp:: the bridge is out and there is no way off the island, the guests are left to fend for themselves against this unknown murderer.

I admit that it is probably hard to breathe life into a genre which has had as many face lifts as Joan Rivers, but the onus then falls on the cast and director to keep the pace moving and the audience rapt. While the show does move quickly, Caitlan Lowans’ direction doesn’t move lightly. Lowans misses the mark on humor and tone, allowing her cast to labor on punch lines and camp far too often.

Her use of Jenna McFarland Lord’s set, however, is fantastic. Lord creates multi-tiered playing spaces complete with garish furnishings and taxidermy, and she provides all the necessary entrances, exits, quick release railings, trap doors and hiding spaces required for a great murder mystery. I found myself eagerly looking around for the next “trick” picture-frame, animated potted plant, or hidden murder weapon.

The ensemble does a decent job making the best of the predictable script. The group of stock characters include: a retired military man, an ingénue, a socialite with a dark past, a saucy maid, and, of course, the butler–who didn’t do it. There are some decently strong performances from the group, most notable Mark Linehan’s Nigel, the black-sheep nephew who has come to collect his fortune, and Margaret Ann Brady’s Mrs. Tweed, who makes it almost to the end and nearly figures the whole thing out.

One of the biggest disappointments was the lack of a full orchestra. The music was written for 9 pieces, but Bethany Aiken served as both music director and the lone instrument, playing piano on stage in the main room Rancour’s estate. I loved seeing Aiken on stage with the cast, interacting as the story moves along, but the lack of other instrumentation left the music feeling flat and without drive. Aiken’s control of the singers and her ability to achieve balance and nuance is sharp, but, even still, she left the score feeling as dull as the assortment of ominous weapons hanging on the wall behind her.

I expected more from Stoneham Theatre, especially with their track record for producing strong musicals but, for me, this “Whodunit” just didn’t do it.